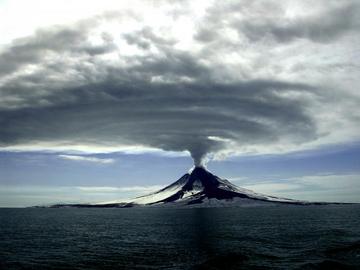 Volcanic ash is hazardous to aircraft because it can degrade engine performance and navigational and operational instrumentation. Meteorologists at the VAAC and the Meteorological Watch Offices use the HYSPLIT forecasts, among other sources of information, for writing Volcanic Ash Advisories and Significant Meteorological Information warning messages (called SIGMETs), respectively. The HYSPLIT dispersion forecasts are issued to the public and made available online, such as at the NWS Aviation Weather Center. Operationally, the NWS runs the ARL-developed HYSPLIT model to forecast the transport and dispersion of volcanic ash in and near the U.S. Volcanic Ash Advisory Centers (VAAC) (Anchorage, AK, and Washington, DC) areas of responsibility. 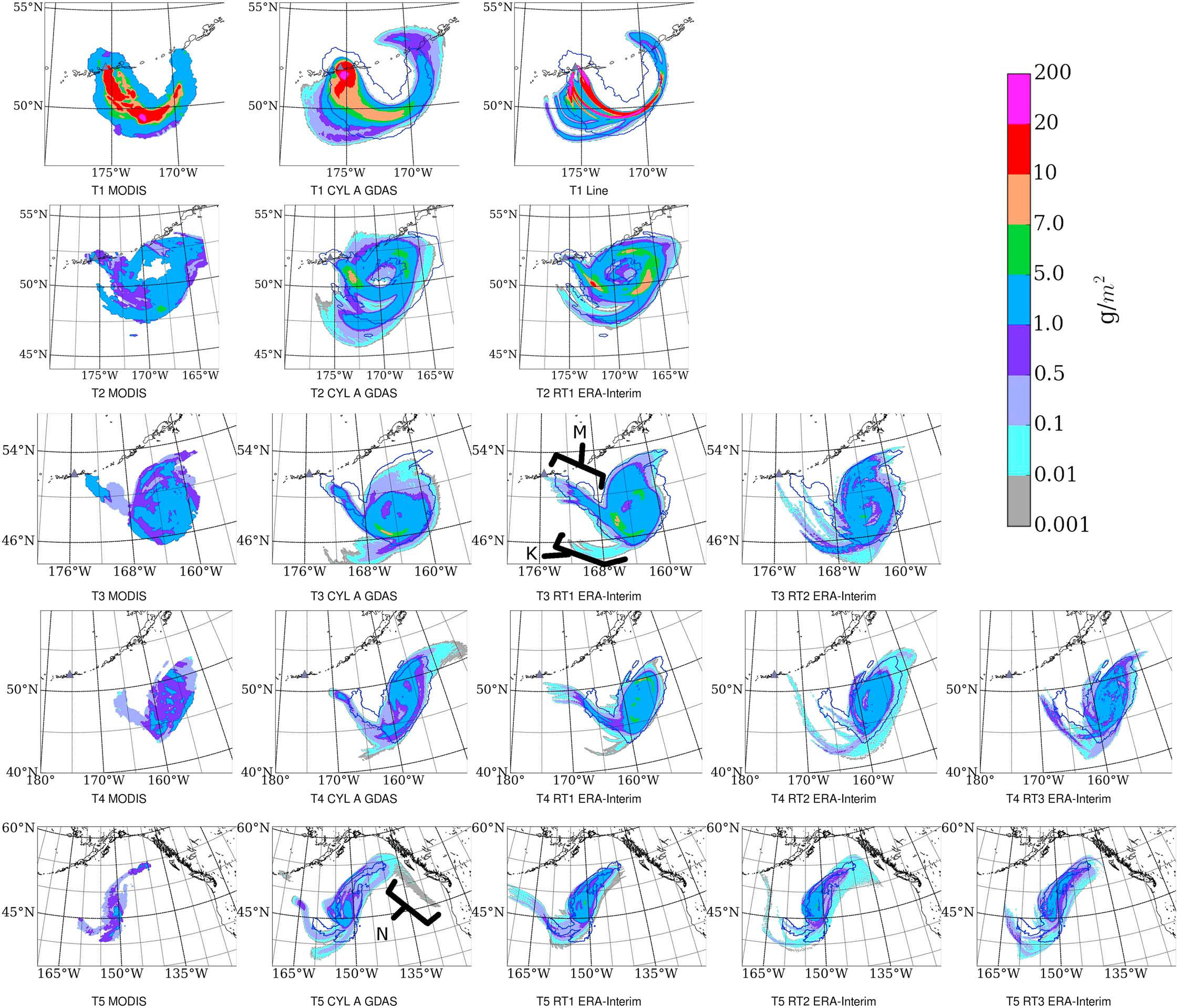 2008 Kasatochi eruption contour plots of mass loading (column 1). The satellite retrievals at (rows 1–5) T1-T5. (columns 2–5) HYSPLIT mass loading output with initialization and meteorology as labeled. The thick blue lines outline the footprint of the satellite retrieval shown in Figure 2 (column 1). The black triangle shows the location of Kasatochi. The color bar in the upper right corner applies to all plots. The feature labeled M in the T3 RT1 ECMG plot is an arm of high-altitude ash stretching northwest from the main ash cloud toward the volcano. The feature labeled K is an arm of low-altitude ash stretching southward from the main ash cloud.

HYSPLIT is set to use the same volcanic ash source term and produce look-alike output graphics as VAFTAD (Heffter and Stunder, 1993). The main differences between running HYSPLIT for volcanic ash and running HYSPLIT at the ARL HYSPLIT web page (unregistered or registered) is in the source term (the initial conditions of the substance being modeled) and the output graphics. For volcanic ash, a set of particles of a given size distribution are uniformly distributed in a vertical layer above the volcano. Additional options, such as mass emission rate and wet deposition, are not available for running HYSPLIT on ARL’s volcanic ash webpage. All HYSPLIT options are available in the Windows-based version that may be downloaded from the HYSPLIT main page.

Following the 1980 eruption of Mount St. Helens, a NOAA – Federal Aviation Administration (FAA) Memorandum of Understanding (MOU) on Volcanic Hazards Alert became effective in 1988. ARL’s contribution was to provide forecast trajectories. However, trajectories are limited in that they only provide a representation of the transport paths of single air parcels, rather than a simulation of the complex transport and dispersion of a 3-dimensional volume of ash particles. Hence, the NOAA Air Resources Laboratory developed the Volcanic Ash Forecast Transport And Dispersion (VAFTAD) model.

In 1992 VAFTAD was transferred to operations at the NOAA National Weather Service (NWS). The model output format (see image to right) had been developed in consultation with the FAA. In the late 1990s a network of Volcanic Ash Advisory Centers (VAAC) was established by the International Civil Aviation Organization (ICAO). Two of the North American VAAC are operated by NOAA. The ICAO format of the graphical dispersion forecast was initially that of VAFTAD.

In 2005 the ARL-developed Hybrid Single-Particle Lagrangian Integrated Trajectories model (HYSPLIT) replaced VAFTAD at the NWS. In 2007, the ICAO-formatted graphical product changed from the “VAFTAD-format” (2 pages, 8 plots per page, 12-h, 24-h, 36-h, and 48-h forecasts) to the “Volcanic Ash Graphic” (VAG) format (1 page, 4 plots per page, observation, 6-h, 12-h, and 18-h forecasts) to make the information in the text Volcanic Ash Advisory and the graphic (VAG) identical. At the same time, ICAO did not specify format requirements for dispersion model output, hence the NWS retained the “VAFTAD-format”. ICAO documentation including an example VAG and a description of the VAAC duties are given in the “International Standards and Recommended Practices, Annex 3 to the Convention on International Civil Aviation, Meteorological Service for International Air Navigation” available from ICAO. 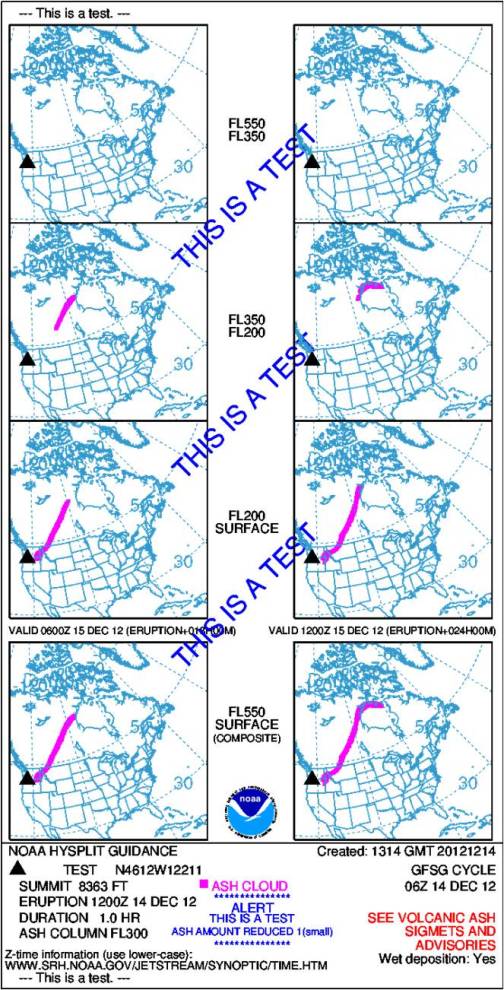