The statistical results from running HYSPLIT for each of the tracer experiments in the DATEM archive are summarized in this section. If available, the 32 km North American Regional Reanalysis (NARR; ftp://arlftp.arlhq.noaa.gov/narr/) meteorological data or the CONUS WRF 27-km dataset (WRF; Ngan and Stein, 2017; ftp://arlftp.arlhq.noaa.gov/archives/wrf27km/) were used for the computations, otherwise the 2.5 degree global reanalysis data (GBL; ftp://arlftp.arlhq.noaa.gov/pub/archives/reanalysis) were used. HYSPLIT revision v.5.0.0 was used for the simulations and the mixing configurations are listed in Table 1. The dispersion results were evaluated against measured tracer concentrations using four normalized statistical parameters, including the correlation coefficient (R), the fractional bias (FB), the figure of merit in space (FMS), and the Kolmogorov–Smirnov parameter (KSP). For each normalized parameter, the best score is 1 and the worst score is 0. Thus, the cumulative score (rank) ranges from 0 (worst) to 4 (best). The overall evaluation results are shown in Table 2 and Figure 3. The link to the RANK gives the complete statistical summary for that experiment. See the DATEM report for a more detailed description of the evaluation methodology.

The DATEM archive includes experiments on the spatial scales ranging from sub-kilometer to 1000’s km (Figure 1). Note that INEL74, SRPTEX, and ETEX were not included in the extensive evaluation since they took place either not in North America or before 1980; thus, the NARR and WRF datasets do not apply to them. The location of tracer experiments and the HYSPLIT domain coverage for each of them are shown in Figure 2. Here are brief descriptions of each of the tracer experiments used in the evaluation process.

Figure 1. The schematic of the spatial scale (log km) of nine controlled tracer experiments in DATEM. 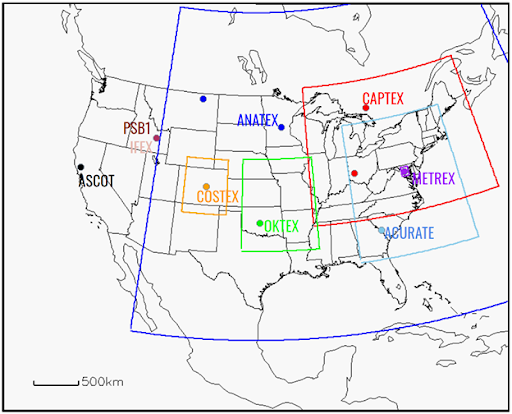 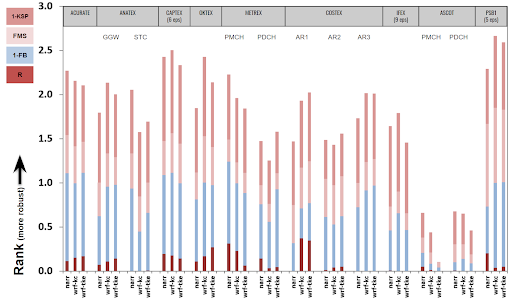