HYSPLIT models simulate the dispersion and trajectory of substances transported and dispersed through our atmosphere, over local to global scales.

HYSPLIT is a complete system for computing simple air parcel trajectories, as well as complex transport, dispersion, chemical transformation, and deposition simulations. HYSPLIT continues to be one of the most extensively used atmospheric transport and dispersion models in the atmospheric sciences community. A common application is a back trajectory analysis to determine the origin of air masses and establish source-receptor relationships. HYSPLIT has also been used in a variety of simulations describing the atmospheric transport, dispersion, and deposition of pollutants and hazardous materials. Some examples of the applications include tracking and forecasting the release of radioactive material, wildfire smoke, windblown dust, pollutants from various stationary and mobile emission sources, allergens and volcanic ash. 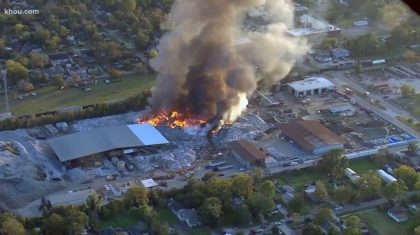 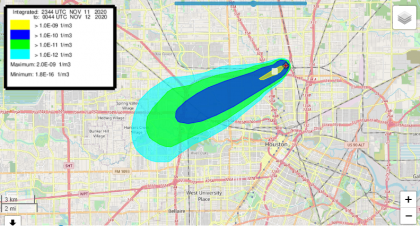 HYSPLIT Atmospheric Dispersion predictions from for Nov 11, 2020, northeast Houston area smoke plume. The WFO provided these information to the Houston Office of Emergency Management to inform the public alerts and response options.