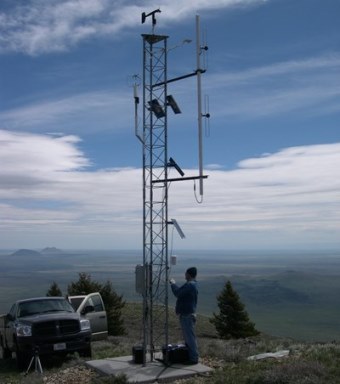 ARL performs routine maintenance of one of the meteorological stations located at the top of Big Southern Butte in Idaho. Photo: NOAA 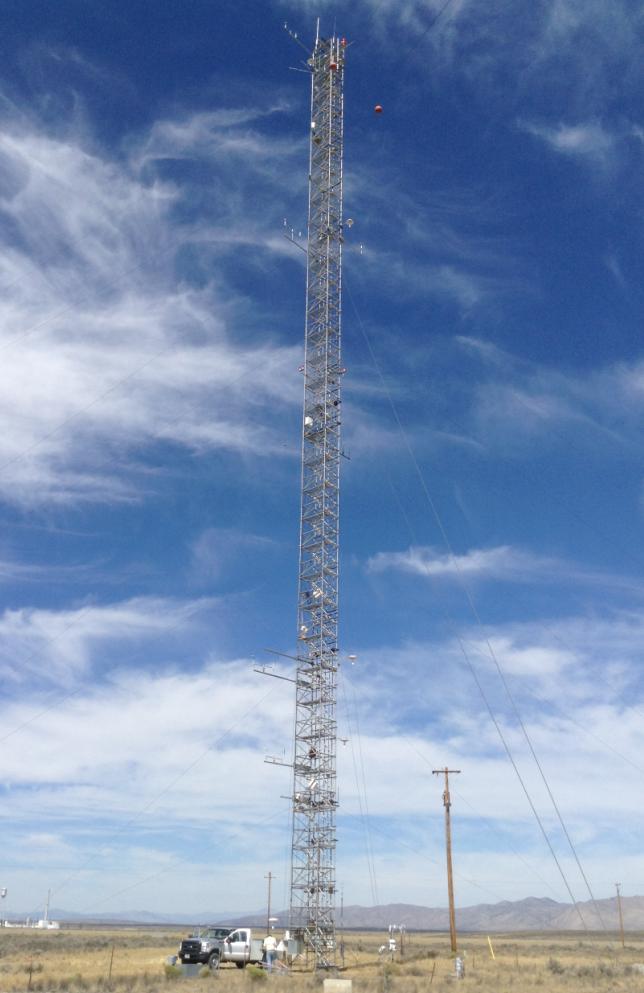 The NOAA/INL Mesonet (MESOscale meteorological monitoring NETwork) began with a single station at the Central Facilities Area (CFA) in 1949 on what is now known as the Idaho National Laboratory (INL). Between 1950-1970, six on-site and 16 off-site monitoring stations were added to form an expanded observational network. The number of meteorological monitoring stations continued to expand and change over the years not only to support various projects and provide meteorological data for emergency response models, but also to to gain a better understanding of the climatology of the INL and Eastern Snake River Plain. The current configuration of the Mesonet meets the needs of INL planners, emergency managers, scientists, engineers, operations personnel, the local National Weather Service (NWS) Weather Forecast Office (WFO) in Pocatello, ID, and the general public.

There are currently 34 fully automated meteorological observation stations in operation at the INL and surrounding area. Thirteen of the stations are located within the boundaries of the INL. The remaining stations are sited at key locations throughout the Eastern Snake River Plain. Standard meteorological parameters are measured at each Mesonet station. All station information, instrument height, and types of data being collected at each level is available.

Most of the towers are 50 ft. tall; taller towers range in height from 150 to 250 ft. and are the “primary” on-site observation stations in each of the three INL microclimate zones. These towers are at Grid 3/INTEC (GRI), MFC, and SMC. Shorter towers are on the summit of Big Southern Butte and Craters of the Moon National Park where aesthetic restrictions permit only a 20 ft. and 30 ft. tower, respectively.

A map of the 34 NOAA/INL Mesonet stations is above. Several of the stations, called Community Monitoring Stations (CMS), are sited at schools and other places frequented by the public to enhance relations with the local communities. The CMS stations were developed in partnership with DOE-ID, the State of Idaho INL Oversight Program, the Shoshone-Bannock Tribes, the City of Idaho Falls, and the State of Idaho Transportation Department (ITD). The CMS stations include a walk-up kiosk that displays current meteorological parameters and describes each of the measured variables. Typical representation of the mesonet tower configuration and instrument layout including instrument specifications is also available.

ARL’s FRD not only installs instrumentation, but also establishes networks of meteorological monitoring towers and associated sensors (mesonet). In a mesonet, the instrumentation must be carefully selected to permit a coordinated remote collection of data from the various sensors. The data are collected into a central repository through phone lines, radio frequency communications, or various other means and displayed in real-time for emergency responders or experiment directors.

Over the years, ARL has installed and operated numerous mesonets in support of various tracer and other meteorological studies. Perhaps one of the most extensive mesonets installed was the 43-station mesonet for the San Joaquin Valley Air Quality Study. Smaller mesonets were installed for the Utah County Carbon Monoxide Study and the Central California Ozone Study.

Proper instrumentation is required to adequately and accurately characterize the meteorological conditions for each study. The types of instruments used include: