ARL Director Ariel Stein also served as a host of this conference in his role as Acting GML Director. The 2022 virtual conference marked the 50th year of Global Monitoring Annual Conference.

ARL intern Todd McKinney has been awarded a grant to deploy micro supper pressure balloons from Antartica. As proposed, five mico super pressure balloons will be deployed from Neumayer III Station during the 2022/23 summer season. A solar powered WSPR transmitter on the 20 meter band will be flown to relay atmospheric data. After being deployed, the four balloons will undertake two scientific objectives. The first objective is to evaluate the performance of the balloons and payloads. The super pressure balloons being deployed are approximately 2 meters long; this is very small compared to other super pressure balloons flown on the Antarctic continent. Understanding how these small balloons perform in polar conditions could pave the way for future super pressure balloon experiments that require minimal resources and labor. The use of a WSPR transmitter will also provide additional ionosphere propagation data to the DP0GVN station. Because a WSPR receiving station is already installed at Neumayer Station, no additional ground station is needed to collect balloon data.. The second objective is to test the NOAA HYSPLIT model in polar conditions. Super pressure balloons float on surfaces of constant density while air masses move via isentropic surfaces. It is known that vertical shear in the polar stratosphere causes deviations of balloon trajectories from the actual air mass trajectories. This study hopes to use HYSPLIT’s vertical motion calculation to mathematically characterize those deviations. These balloons will also be used to validate instantaneous horizontal wind vectors at vertical positions of each balloon. In summary, this project will yield valuable atmospheric data and can be characterized as low cost, high reward, where the deployment of these balloons will require little time, space, and resources. 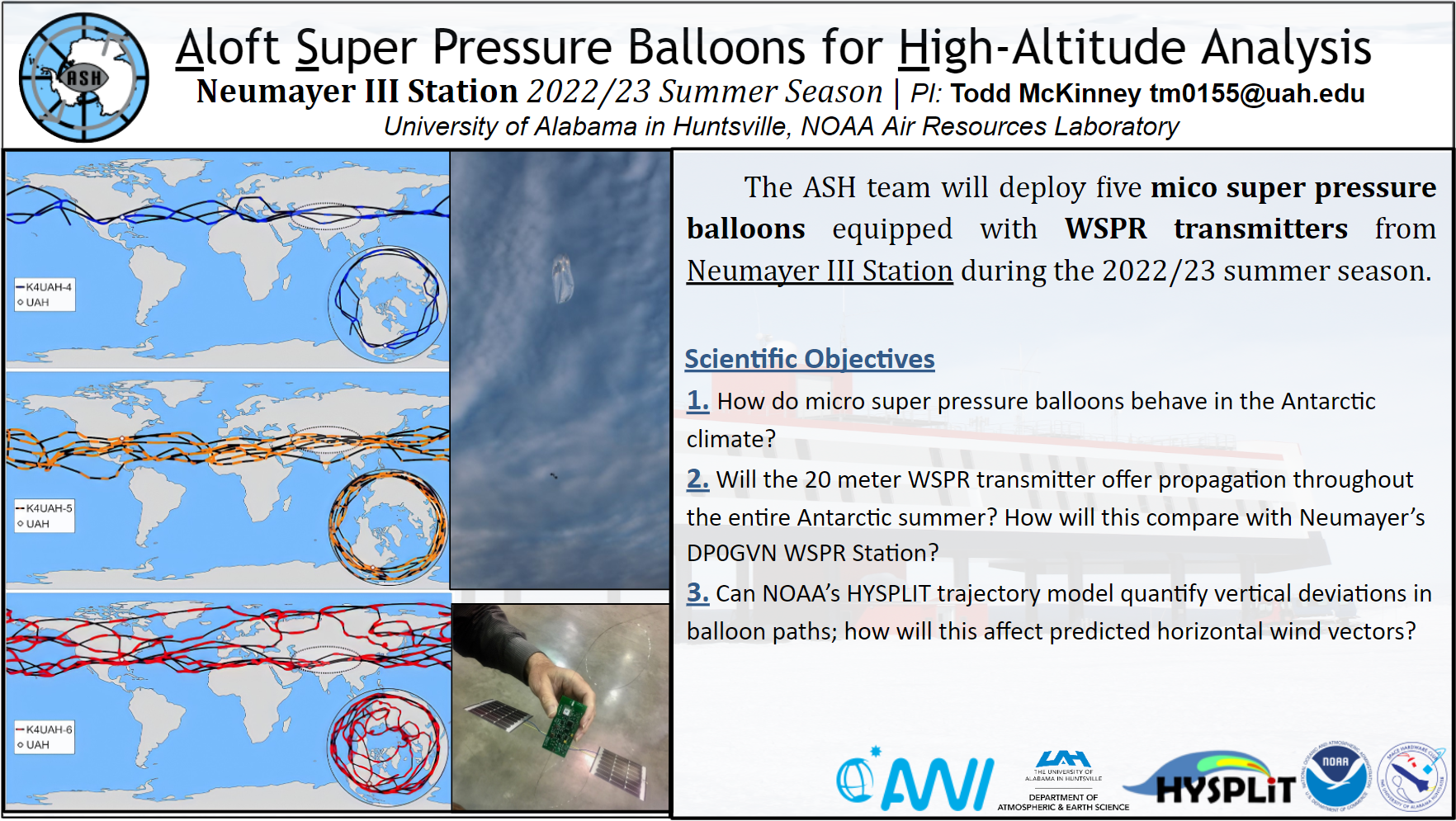 Abstract: Wildfire outbreaks can lead to extreme biomass burning (BB) emissions of both oxidized (e.g., nitrogen oxides; NOx = NO+NO2) and reduced form (e.g., ammonia; NH3) nitrogen (N) compounds. High N emissions are major concerns for air quality, atmospheric deposition, and consequential human and ecosystem health impacts. In this study, we use both satellite-based observations and modeling results to quantify the contribution of BB to the total emissions, and approximate the impact on total N deposition in the western U.S. Our results show that during the 2020 wildfire season of August–October, BB contributes significantly to the total emissions, with a satellite-derived fraction of NH3 to the total reactive N emissions (median ~ 40%) in the range of aircraft observations. During the peak of the western August Complex Fires in September, BB contributed to ~55% (for the contiguous U.S.) and ~ 83% (for the western U.S.) of the monthly total NOx and NH3 emissions. Overall, there is good model performance of the George Mason University-Wildfire Forecasting System (GMU-WFS) used in this work. The extreme BB emissions lead to significant contributions to the total N deposition for different ecosystems in California, with an average August – October 2020 relative increase of ~78% (from 7.1 to 12.6 kg ha−1 year−1) in deposition rate to major vegetation types (mixed forests + grasslands/shrublands/savanna) compared to the GMU-WFS simulations without BB emissions. For mixed forest types only, the average N deposition rate increases (from 6.2 to 16.9 kg ha−1 year−1) are even larger at ~173%. Such large N deposition due to extreme BB emissions are much (~6-12 times) larger than low-end critical load thresholds for major vegetation types (e.g., forests at 1.5-3 kg ha−1 year−1), and thus may result in adverse N deposition effects across larger areas of lichen communities. 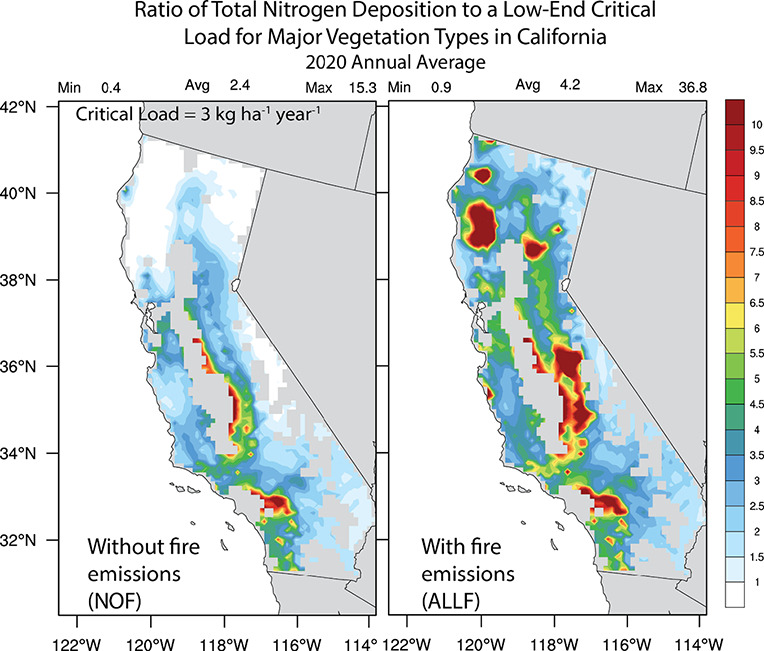 Graphical abstract for Campbell et al., Pronounced increases in nitrogen emissions and deposition due to the historic 2020 wildfires in the western US. doi: 10.1016/j.scitotenv.2022.156130.