U.S. Climate Reference Network (USCRN) and Hurricane Ian – Dr. Howard Diamond, the USCRN Program Manager for ARL began on September 27, 2022,  to monitor the forecast track of Hurricane Ian prior to its making landfall in Florida on September 28. This is both to ensure that the USCRN is functioning normally, as well as to prepare the engineering staff for any station preparedness issues such as emptying the rain gauges by local site staff, as well as to field any possible inquiries from OAR on potential and/or actual property damage. Below are four images of the tracking charts he compiled, and particular attention was paid to four stations in Florida, three stations in Georgia, two stations in South Carolina, and three stations in North Carolina (at two locations, where one location has two stations); the exact impact assessments in his four daily reports from Sep 27-30, 2022, changed a bit each day as the forecast track of the storm changed.

Dr. Diamond was happy to report that there was no damage sustained at any of the USCRN stations and he attributes this to not only the robust engineering of the network, but perhaps a small bit of good fortune as well. The most significant thing to report was in regards to the Titusville, FL station (at Cape Canaveral), where the total amount rainfall for the month of September was 22.82 inches, easily eclipsing the previous station record of 16.82” set in May 2009. The previous record wettest September was 14.11” set in 2014. So, Ian was quite a significant event and a 1 in 25 year event, the 24-hour accumulation of rain on September 29, 2022 alone was 11.09” and also a new record for the station and a 1 in 50 year event status – so nearly 50% of the station’s anticipated monthly rainfall came in that one 24-hour period. While the USCRN stations weathered the storm well, the ARL and USCRN program staff wants to express their sincere condolences to the people who lost family members and property during what was at initial US landfall.  Ian had made its first landfall in western Cuba a few days earlier, but landed near Sanibel Island, FL as a near Category 5 intensity hurricane, as well as those in South Carolina where a second US landfall occurred at a near Category 2 level, and significant damage was experienced there as well. 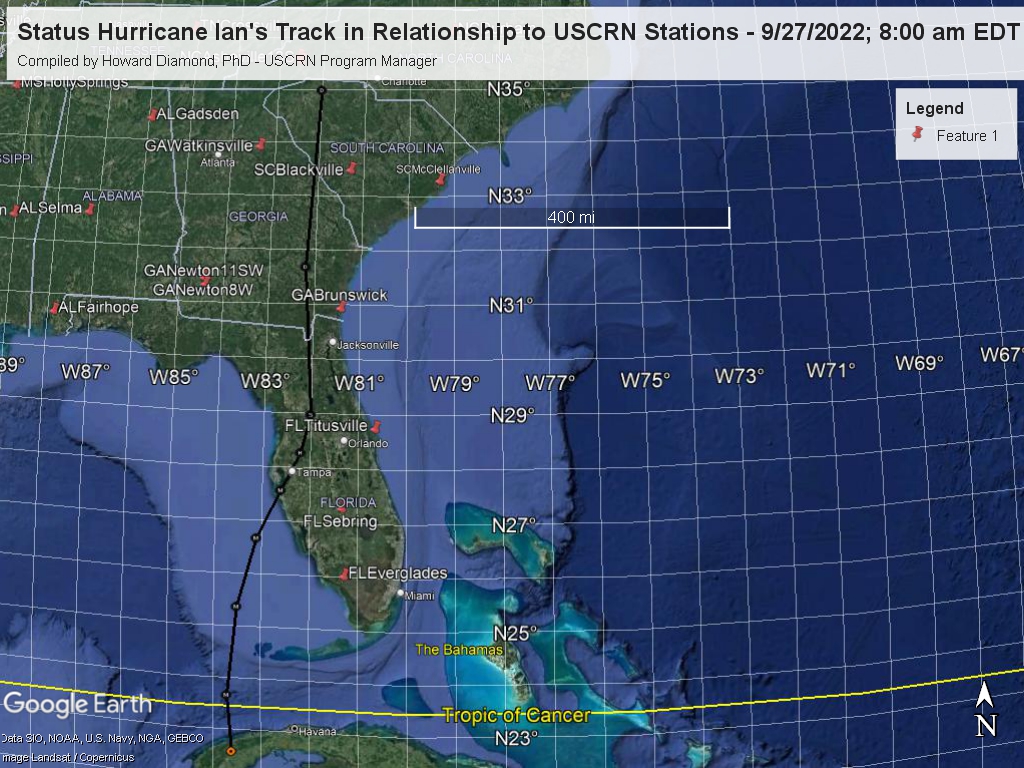 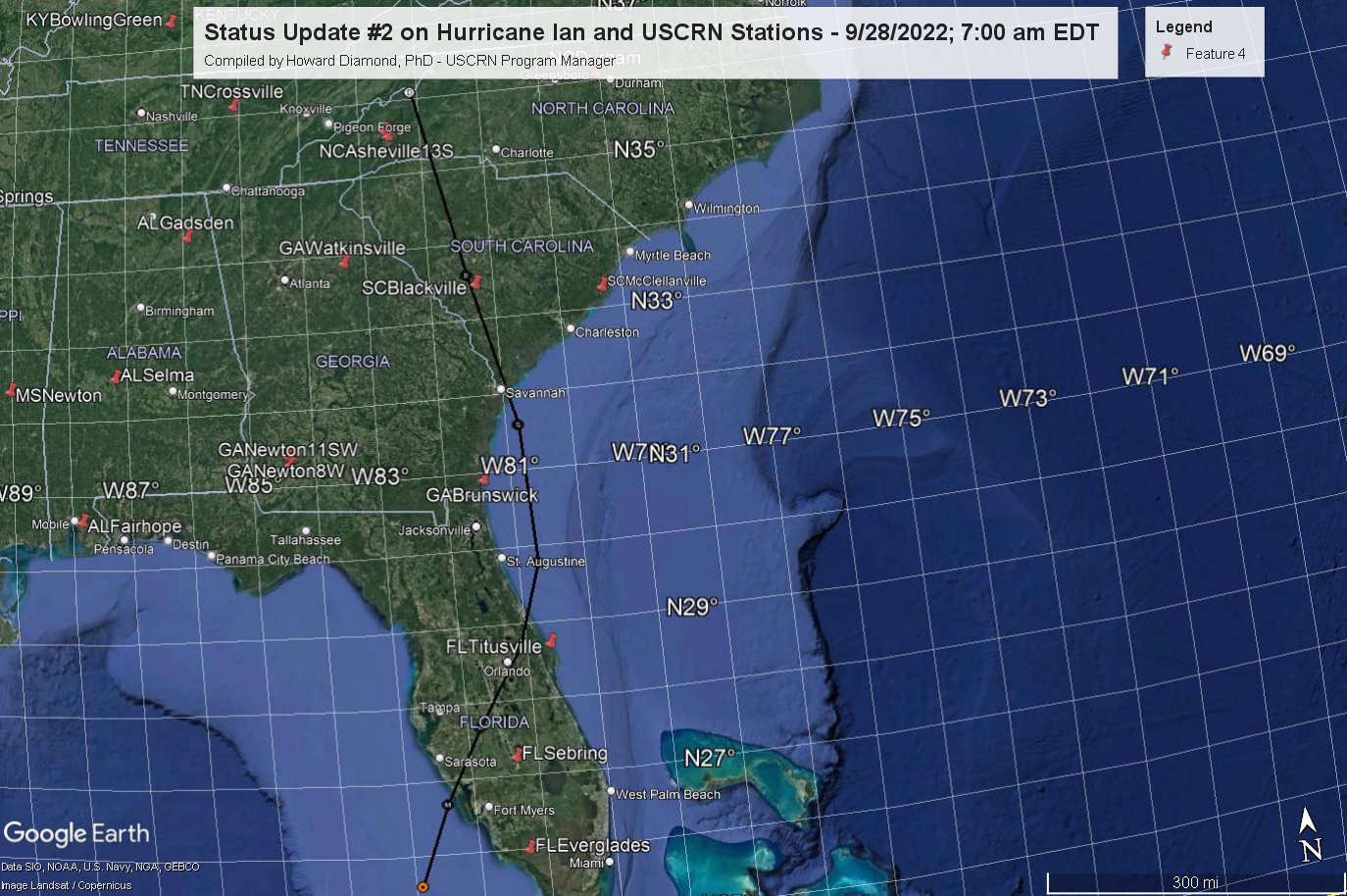 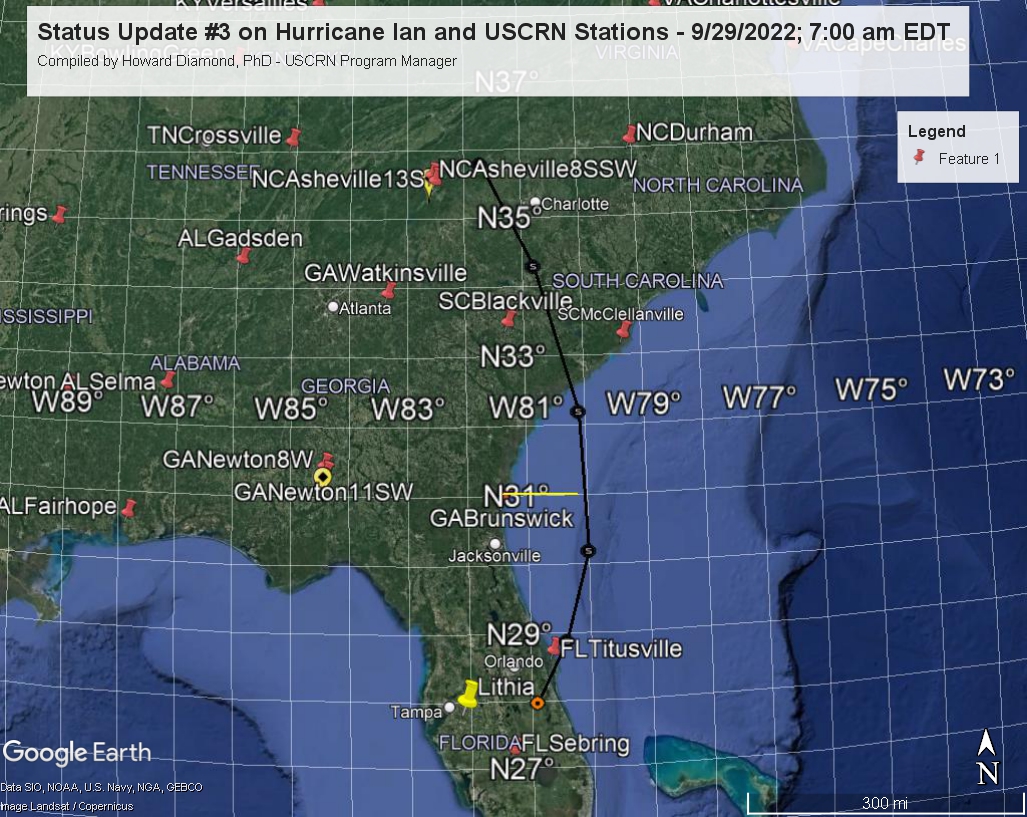 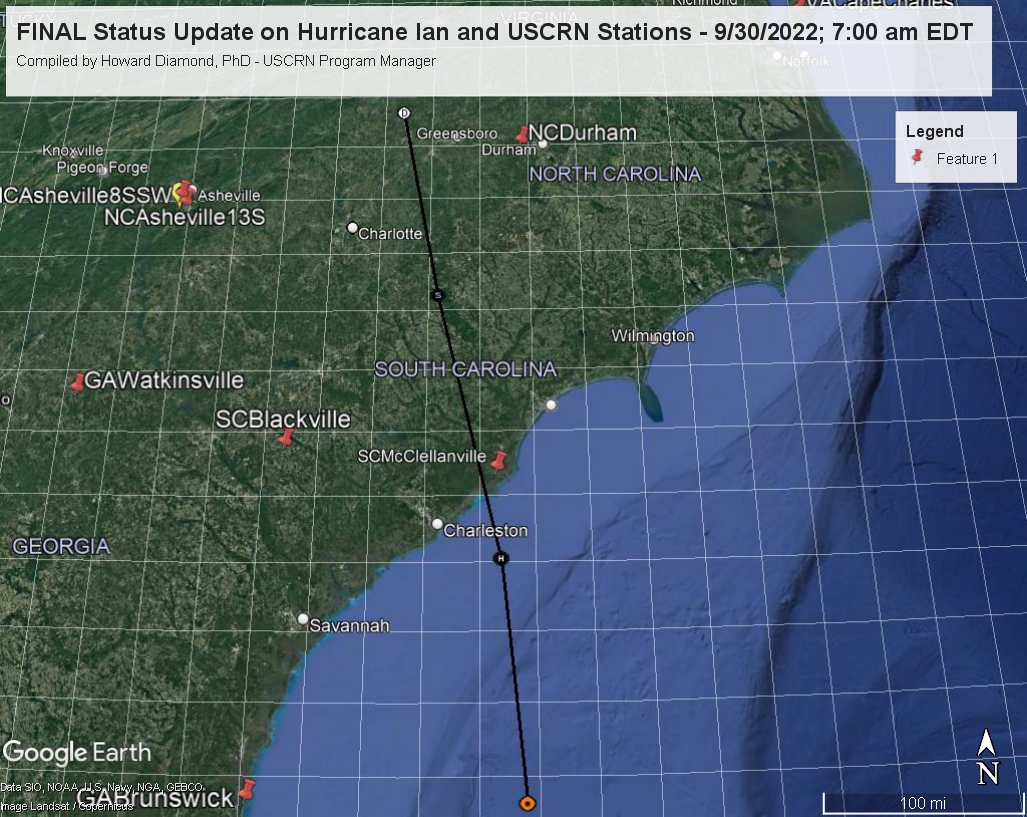 Xinrong Ren presented ARL’s plans to deploy the Cessna research aircraft and a mobile van in New York City and Washington, DC/Baltimore areas in summer 2023. Barry Baker discussed with their modeling colleagues about potential collaboration with ARL’s forecasting capability. At the end of the workshop, Barry Baker, Xinrong Ren, Chris Loughner, and Miguel Cahuich also attended a breakout session on GRAAPES (GReenhouse gas And Air Pollutants Emissions System) to enhance the capability to model and map greenhouse gas and air pollutant emissions and their associated uncertainties in order to leverage and connect with efforts across state and federal programs. 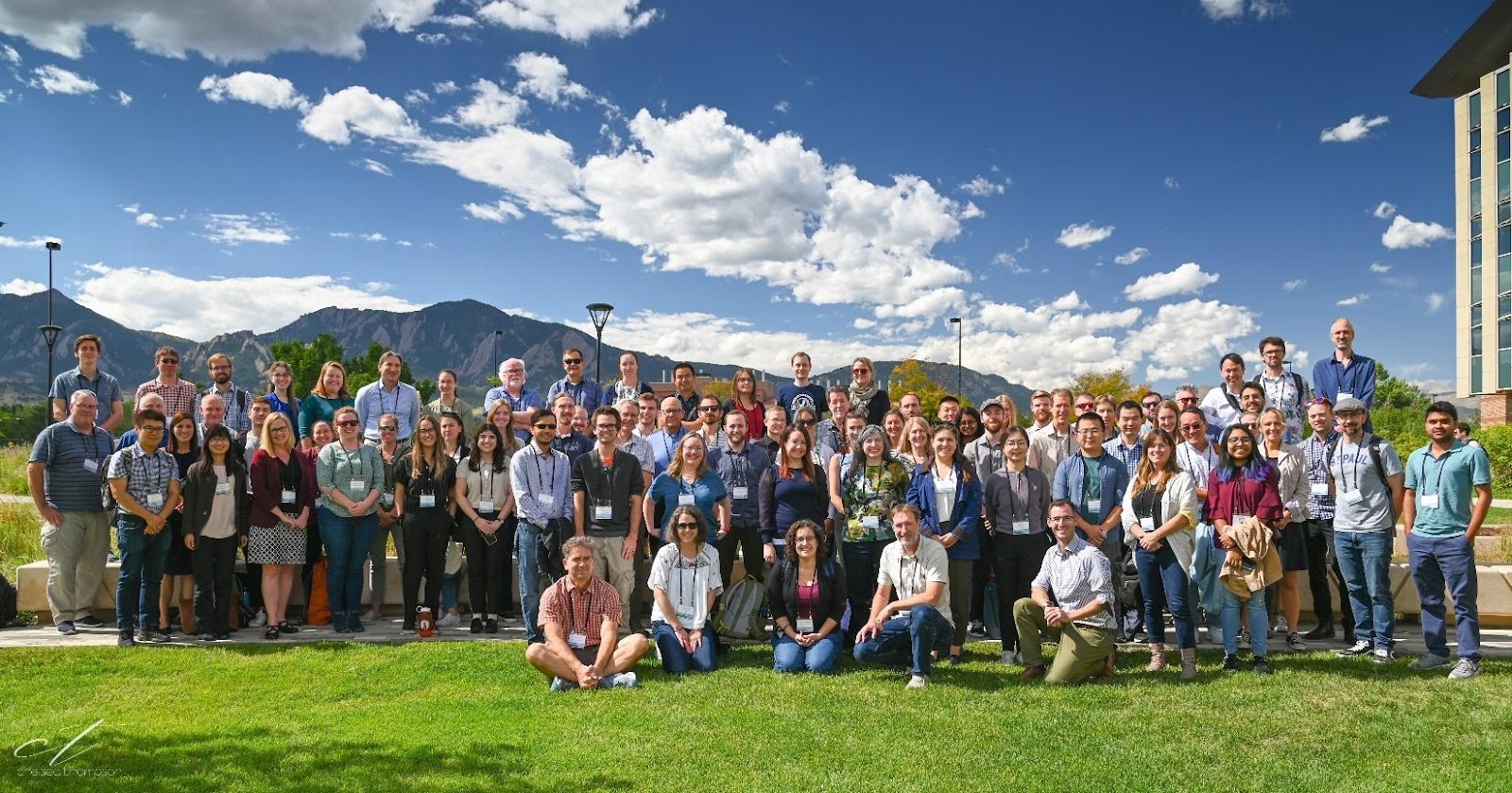 In preparation for the continuation on the work published in 2019 on methane emissions from the Marcellus Shale region, Phil Stratton and Xinrong Ren calibrated and installed ARL’s newly acquired Aeris Ultra ethane/methane instrument on a Cessna 402 research aircraft. A successful test flight was conducted over Baltimore on Wednesday September 28 and flights are expected over the Marcellus Shale region in western Pennsylvania in early October 2022. This work is being conducted in order to investigate the change in observed methane emissions from the previous work conducted by Xinrong and Phil, where the methane emission rate observed was approximately 21 kg/second in the southwest area of the Marcellus region in 2015/2016. Since the data collection in 2015/2016, the gas production in the Marcellus Shale region has increased by 70% and the area has become the largest shale gas production play in the US. 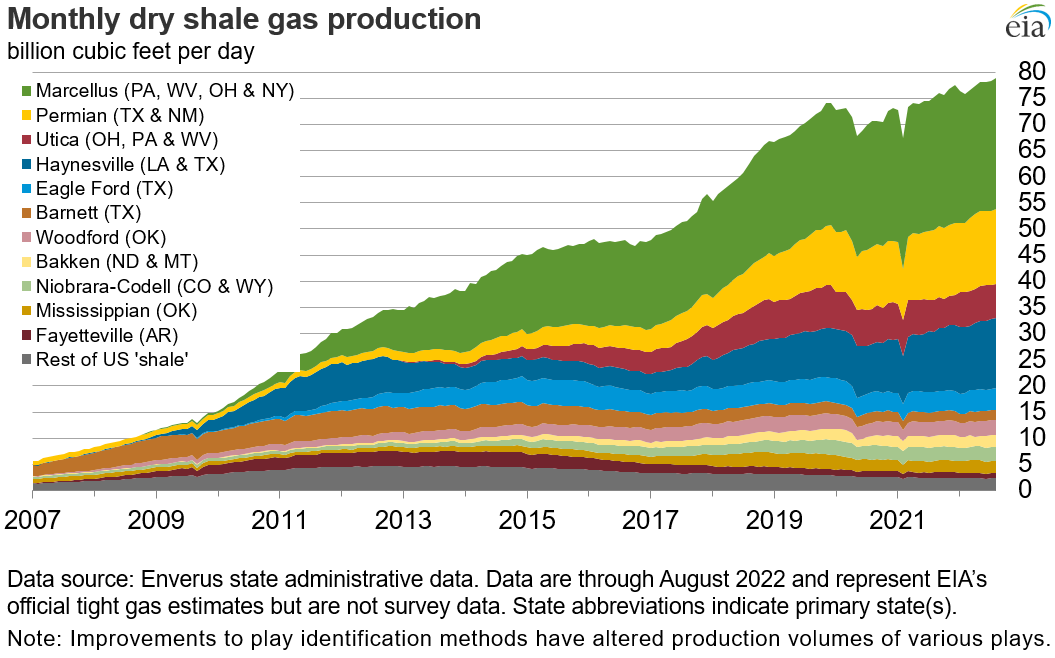 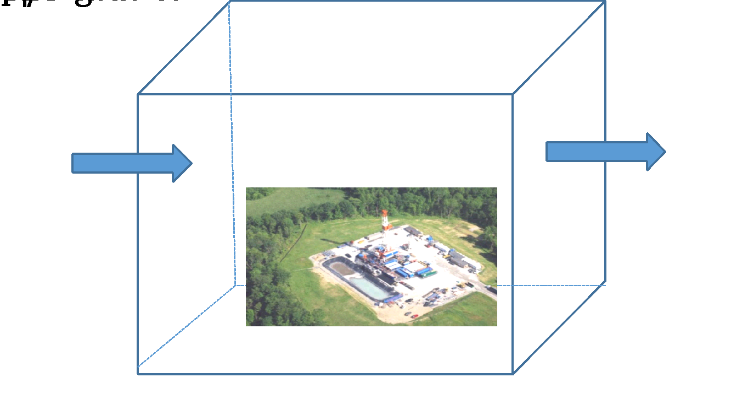 The concept model of a mass balance approach to quantify methane emissions from an oil & natural gas operation area. 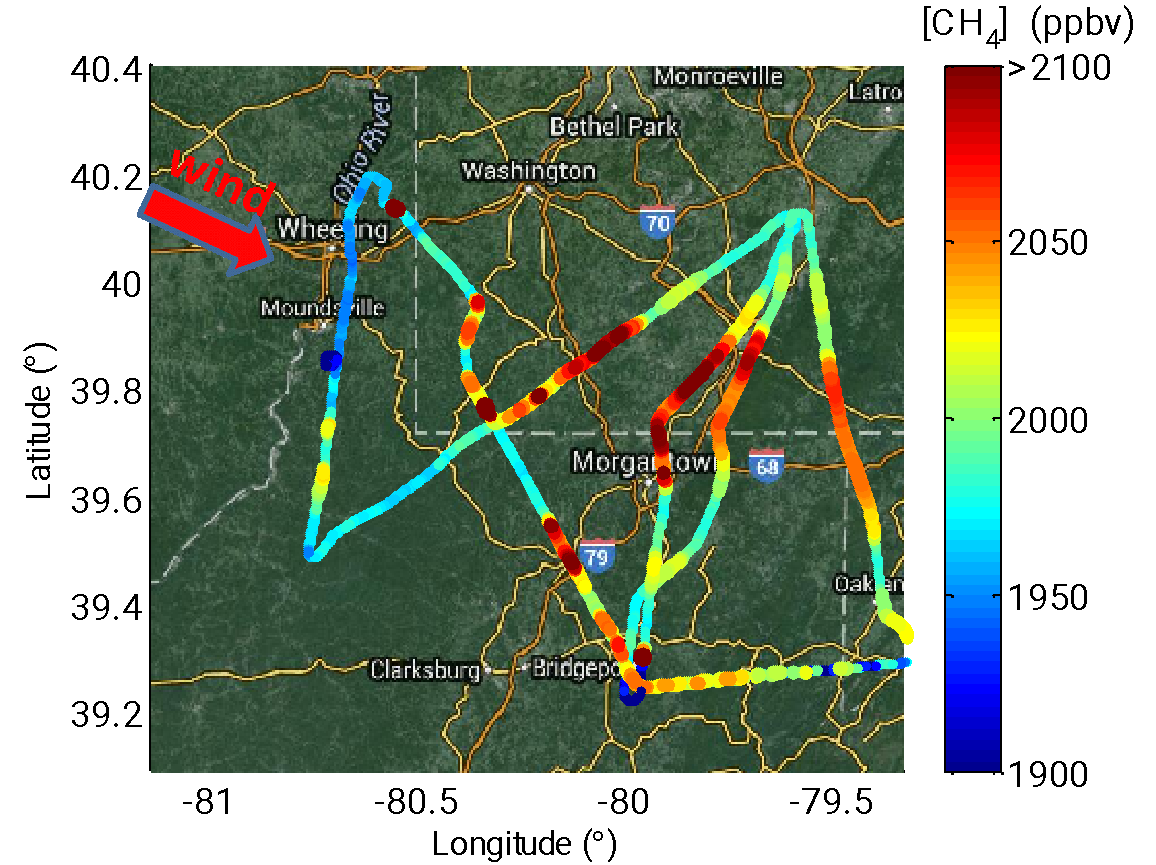 Methane (CH4) mixing ratios measured along the flight track on 14 September 2015. Enhancement of methane was observed along the downwind transects (Ren et al., 2019).