Since 2015, the NOAA Air Resources Laboratory (ARL) Atmospheric Turbulence and Diffusion Division (ATDD) in Oak Ridge, Tennessee has been using small Uncrewed Aircraft Systems (sUAS) to better understand processes occurring in the lowest few hundred feet of the atmosphere. Much of this work has been conducted during targeted field studies, in which scientists and engineers from ATDD have performed sUAS flights to complement measurements obtained from other weather observing platforms (surface weather monitoring instruments, weather balloons, and radars for example) deployed by ATDD and its collaborators from other NOAA laboratories and universities.

In 2019, ATDD received permission to perform sUAS flights at the Oliver Springs Airport, located about five miles northwest of ATDD, up to 3300 feet above ground level. ATDD has two aircraft it is using for these flights: a Meteomatics Meteodrone and a BlackSwift Technologies S2. The Meteodrone is a rotary-wing aircraft about 2 feet in diameter, whereas the S2 is a fixed-wing aircraft with a 10-foot wingspan (Figure 1). Both aircraft have sensors on board to measure temperature and moisture and to calculate winds

Routine sUAS flights began in March 2020 using the Meteodrone, with the goal of providing concurrent temperature, moisture, and wind data in near-real time to the NOAA National Weather Service (NWS) Weather Forecast Office (WFO) in Morristown, Tennessee to assist forecasters to make weather forecasts. Shortly after the flights began, they were suspended due to pandemic concerns, and ATDD did not receive permission to resume these flights until August 2020.

On August 20, 2020, ATDD resumed flights with its Meteodrone, typically 3-4 days per week and 8 times daily. Additional safety measures were taken, including traveling in separate vehicles to the Oliver Springs Airport, implementing proper social distancing practices, and wearing face coverings and gloves at all times (Figure 2). The sUAS flights are performed every 30 minutes between approximately 7 AM and 11 AM local time. During each flight, in which both a pilot and a visual observer are present, the Meteodrone ascends from the ground up to its maximum visible altitude, which is typically around 2300 feet, before descending. The entire flight takes about 10 minutes, after which the temperature, moisture, and wind data are sent to forecasters at the Morristown WFO. The data provide near real-time information on the current state of the atmosphere during time periods in which the atmosphere is rapidly changing. Since August 20, 2020 and as of September 24, 2020, the ATDD team has performed 115 such flights (Figure 3). Over the coming months, routine flights will continue, but will also be conducted prior to and during other weather events (severe thunderstorms and winter precipitation for example) to help scientists and forecasters better understand changes in the atmosphere to improve weather forecasts.

As a second component of this work, Anaiya Reliford, a Howard University graduate student, collaborated with ATDD through participation in the NOAA Experiential Research and Training Opportunities (NERTO). Anaiya’s experience was entirely virtual and despite these limitations, Anaiya evaluated different Optical Particle Counters (OPCs) that will ultimately deploy on one or more sUAS in ATDD’s fleet, and she assisted with analyses of the sUAS datasets from Oliver Springs. 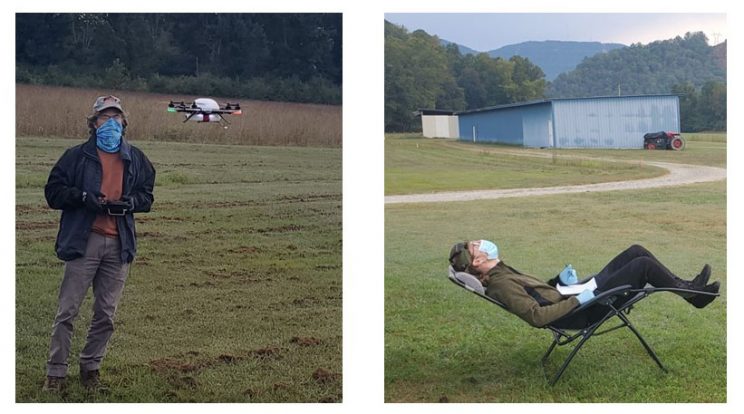 Ed Dumas, an engineer with ATDD, operates the sUAS (left) while Travis Schuyler, a postdoctoral research associate, is the visual observer (right).

Temperature (left) and wind (right) obtained from eight sUAS flights between 1100 UTC (0700 AM local time) and 1430 UTC (1030 AM local time) on August 22, 2020. The early-morning flights show a temperature inversion (i.e. temperature increasing, rather than decreasing, with height) that dissipates during the morning hours. Weak easterly winds persisting throughout the morning. as shown in the right.