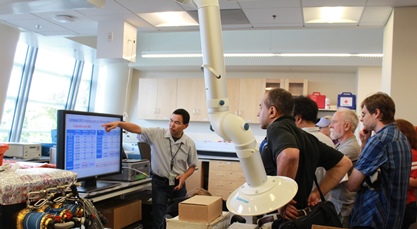 The NOAA Center for Weather and Climate Prediction (NCWCP), where ARL Headquarters is based, hosted its first open house in College Park on Saturday, September 16 to celebrate it’s 5-Year Anniversary. There was a great turnout, with approximately 1000 people in attendance during the day-long event. Visitors were allowed to tour the facility, which houses meteorologists, scientists, data managers and other NOAA employees from NOAA’s National Centers for Environmental Prediction, Satellite and Information Service and the Air Resources Laboratory.

In addition, visitors could participate in launches of weather balloons from the facility grounds; talk with Hurricane Hunter pilots; and learn the intricacies of developing weather forecasts. There was also a ribbon cutting and unveiling of the NCWCP’s own Science on a Sphere (SoS), which is on permanent display in the building library. The NCWCP SoS is one of only three spheres with high resolution (4K) display.

Approximately 200 people toured ARL, where Dr. Ariel Stein gave an overview talk about the Lab in the Plume Prediction Center. The tour then continued with a visit to ARL’s chemistry laboratory, where Dr. Xinrong Ren, Dr. Winston Luke, and Paul Kelley gave short presentations and demonstrations on the Lab’s chemistry research programs (greenhouse gas measurements, mercury monitoring, and air quality measurements, respectively). ARL’s Dr. Mark Cohen and Rick Jiang, along with Harry Cikanek (Director of NOAA’s Center for Satellite Applications and Research) and his son Alexander, served to escort visitors to the Lab. Steven Levine with the National Weather Service volunteered the entire day at the ARL-tour signup table. ARL’s Ogie Olanday helped coordinate everything associated with the Lab tour throughout the day. Overall, the event was a great success. Visitors were interested, engaged, and appreciative of the opportunity to see the workings of NOAA and NCWCP.