2020 State of the Climate Report Published 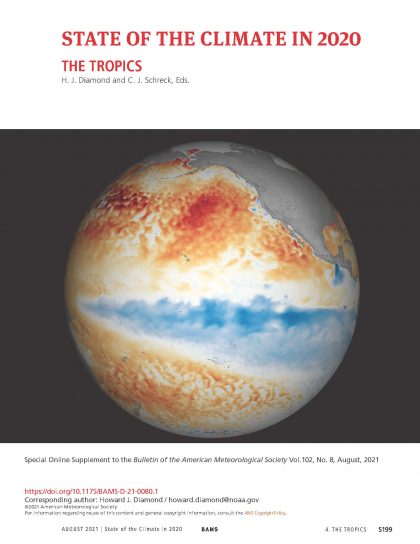 Tropics Chapter cover for the 2020 edition of the annual State of the Climate Report, published by NCEI and BAMS.

As a supplement to the Bulletin, its foremost function is to document the status and trajectory of many components of the climate system. However, as a series, the report also documents the status and trajectory of our capacity and commitment to observe the climate system. ARL’s Dr. Howard Diamond served as the Lead Editor for the Tropics Chapter, and this issue marked his 15th year in that role, and his plan is to do this for his 16th edition for the 2021 report. The Tropics Chapter can be found at https://ametsoc.net/sotc2020/Chapter-4-BAMS2020-FINAL.pdf, and the full report can be found at https://www.ametsoc.org/index.cfm/ams/publications/bulletin-of-the-american-meteorological-society-bams/state-of-the-climate/

Among its findings, the Tropics Chapter portion of the report documented that the number of global tropical cyclones were well above average overall. There were 102 named tropical storms during the Northern and Southern Hemisphere storm seasons, well above the 1981–2010 average of 85. Three tropical cyclones reached Saffir–Simpson scale Category 5 intensity. The North Atlantic hurricane basin recorded a record 30 named storms, surpassing the previous record of 28 in 2005. Seven of those storms became major hurricanes, matching 2005 for a record number. In the North Atlantic, a record 30 tropical cyclones formed, surpassing the previous record of 28 in 2005. Major Hurricanes Eta and Iota made landfall along the eastern coast of Nicaragua in nearly the same location within a two-week period, impacting over seven million people across Central America. In the western North Pacific, Super Typhoon Goni was the strongest tropical cyclone to make landfall in the historical record and led to the evacuation of almost 1 million people in the Philippines. Very Severe Cyclonic Storm Gati made landfall over Somalia, the first storm of such intensity to do so.

LaToya Myles delivered a presentation during the annual meeting of the NOAA Center for Coastal and Marine Ecosystems (CCME). As a member of the CCME Science Advisory Council, she provided an update on the Council’s activities and future directions in support of CCME’s research to address issues confronting marine and coastal communities. CCME is led by Florida A&M University in partnership with Bethune-Cookman University; California State University Monterey Bay; Jackson State University; Texas A&M University-Corpus Christi; and University of Texas Rio Grande Valley.

LaToya Myles gave a presentation at the annual meeting of the NOAA Cooperative Science Center in Atmospheric Sciences and Meteorology (NCAS-M). As a mentor for multiple NCAS-M students over the years, she spoke about internship strategies and opportunities as well as gave an brief overview of ARL.