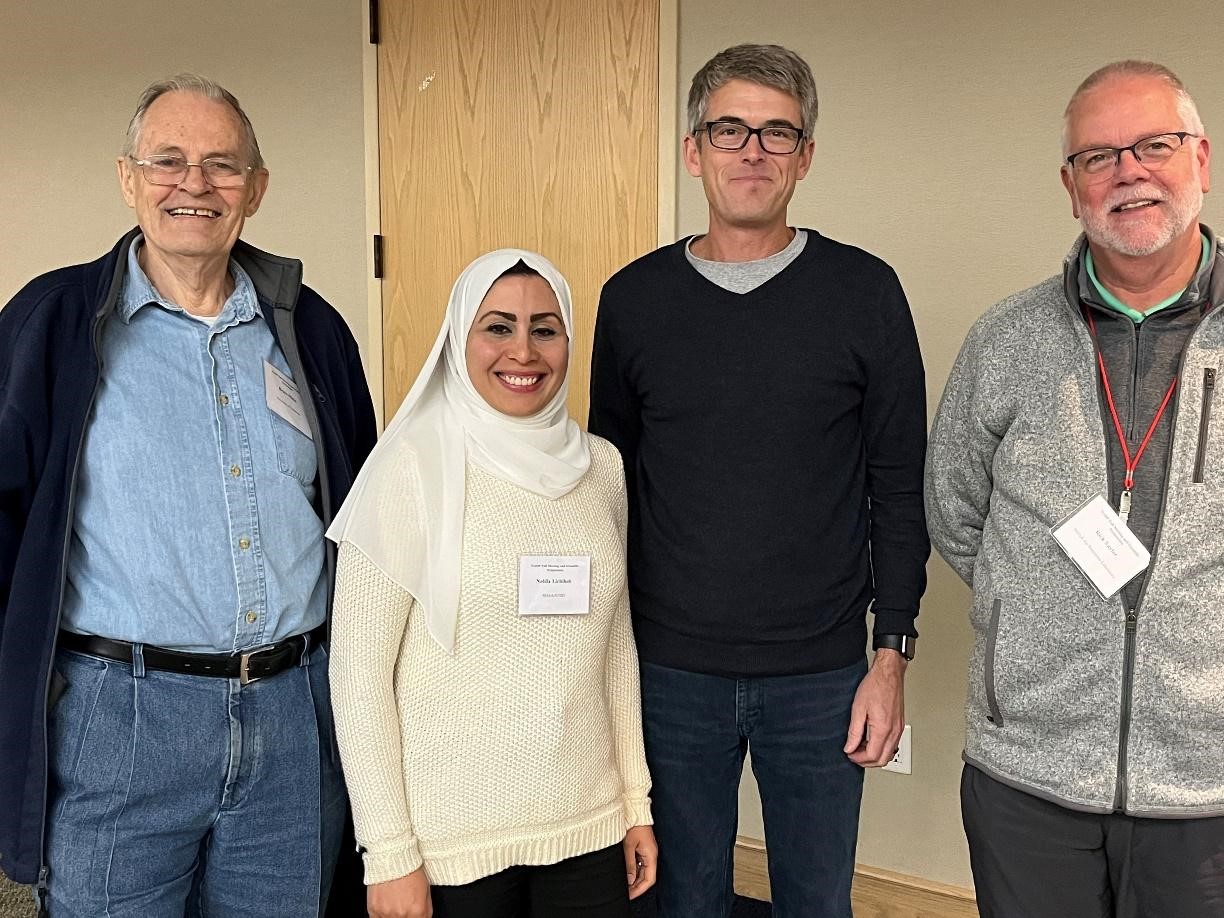 At the UT Conference Center are, from left to right: Bruce Hicks, Nebila Lichiheb, John Walker and Rick Saylor.

The scientific symposium was a great opportunity to meet with our EPA collaborators and discuss future collaborations.

Also at NADP on November 17, Dr. Patrick Campbell gave a virtual presentation on “Pronounced increases in nitrogen emissions and deposition due to the historic 2020 wildfires in the western U.S,” on the following research highlights: 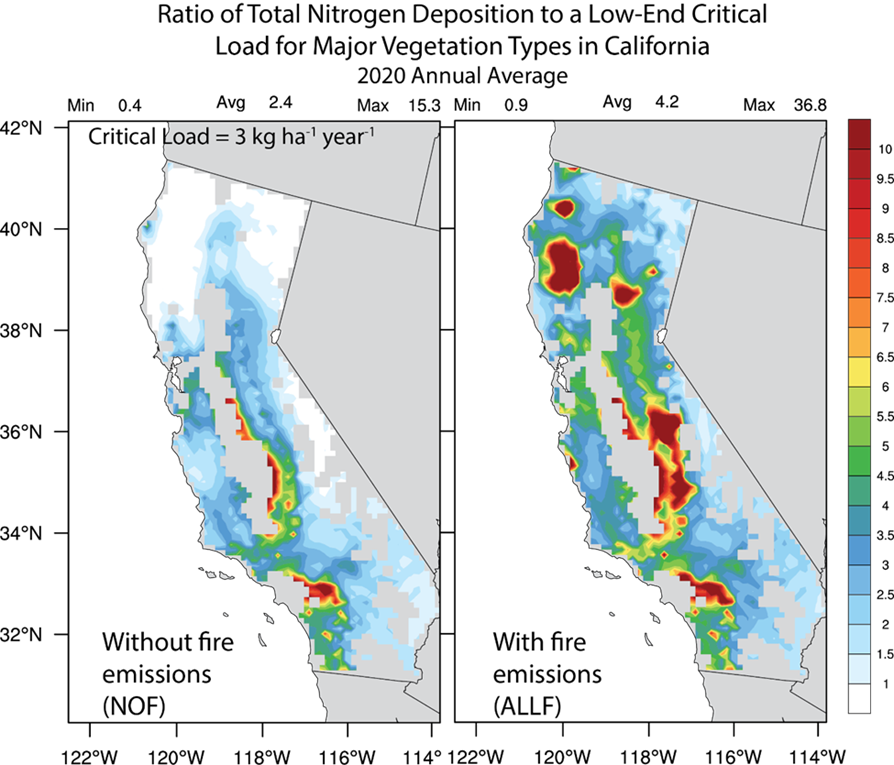 Figure shows the ratio of the total nitrogen deposition (TDEP) to a low-end critical load (CL) for major vegetation types in both the no-fire (NOF) and all-fire (ALLF) model cases. Overall, the average TDEP to CL ratio increases from 2.4 (NOF) to 4.2 (ALLF), with an ALLF grid cell maximum of up to ~37 times greater N deposition (at ~110 kg ha−1 year−1) compared to the low-end.

Phil Stratton and Xinrong Ren were interviewed by Aman Azhar, a reporter from Inside Climate News, while they were conducting a mobile measurement survey in Washington, DC on November 21. During the interview, they talked about NOAA ARL’s Greenhouse Gas (GHG) program and the science and policy relevance of the mobile and aircraft measurements of GHGs. They also talked about how the mobile measurements of air pollutants can help address environmental justice issues in some local communities in Washington, DC and Baltimore. 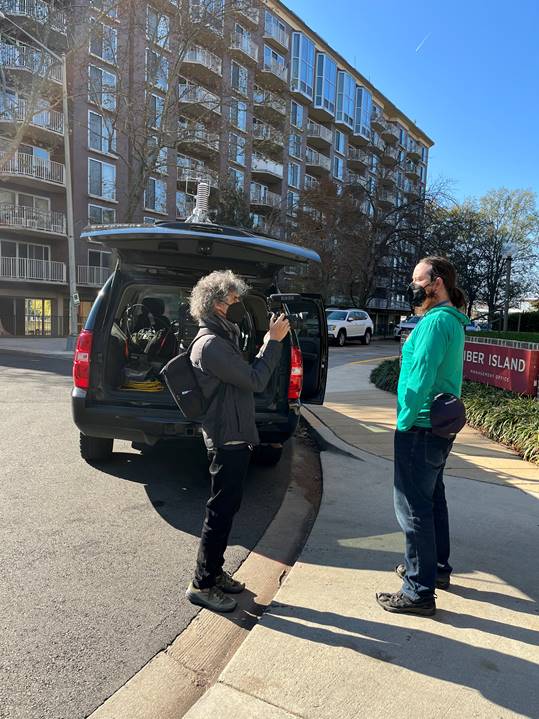 Aman Azhar, left, of Inside Climate News, interviews Phil Stratton, right, during a ride along through the DC area.

On Wednesday November 16, three students from Montgomery Blair High School toured ARL and the NESDIS Operations Center. They are working on an article about climate research and on how NOAA monitors the atmosphere and oceans for Silver Chips, Montgomery Blair High School’s student newspaper. They interviewed Howard Diamond on his role in NOAA, the agency’s climate observation methods and the government’s role in monitoring the Earth’s atmosphere. The students toured the plume lab and the ARL lab space and instrumentation. Xinrong Ren walked them through the goals and instruments on NOAA’s Air Research Car, or ARC. 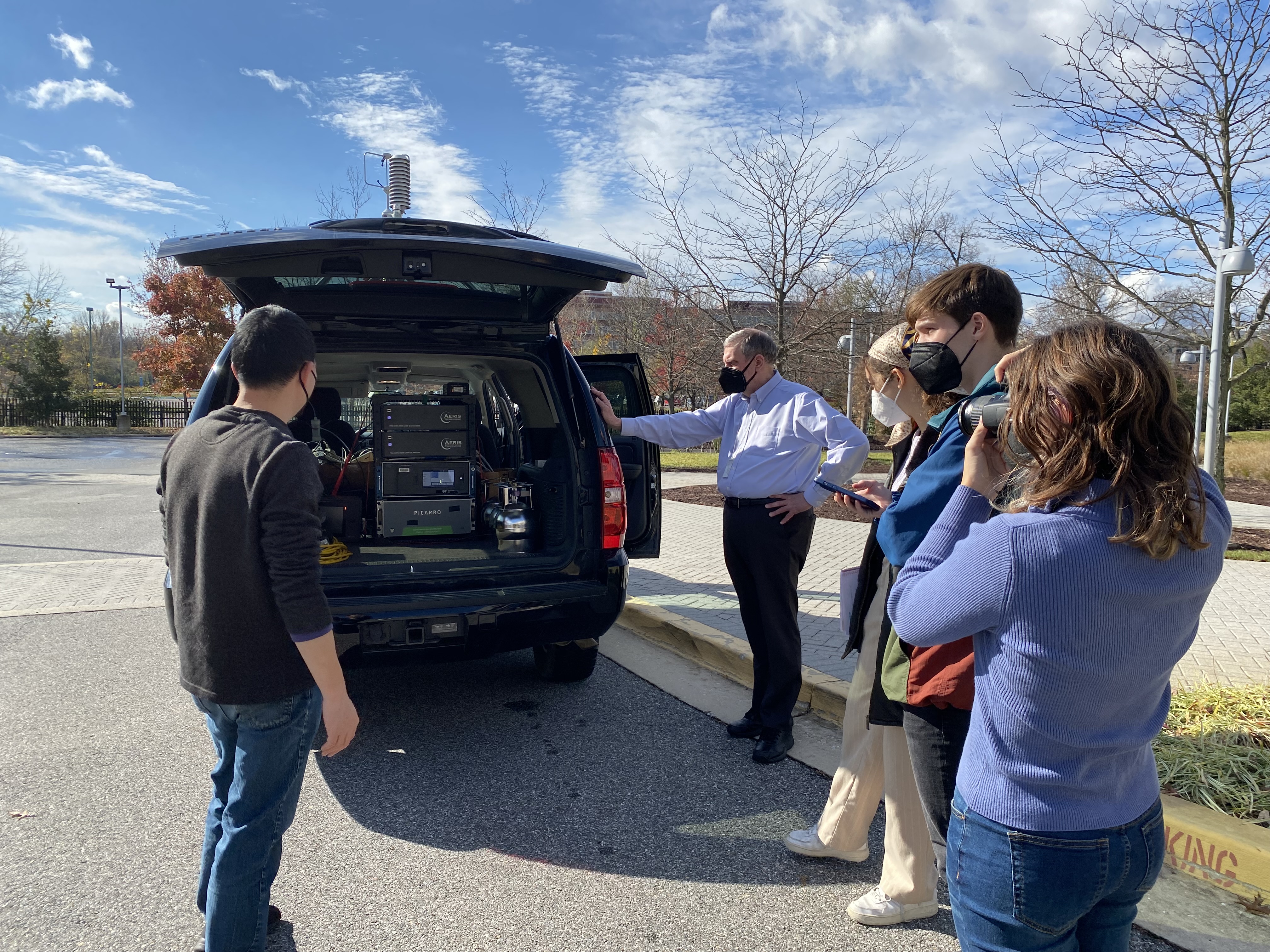 Xinrong Ren, left, shows the students the instrumentation in NOAA’s Air Research Car (NOAA’s-ARC). The vehicle measures a large set of pollutant trace gases and aerosols along with geographical and meteorological information. 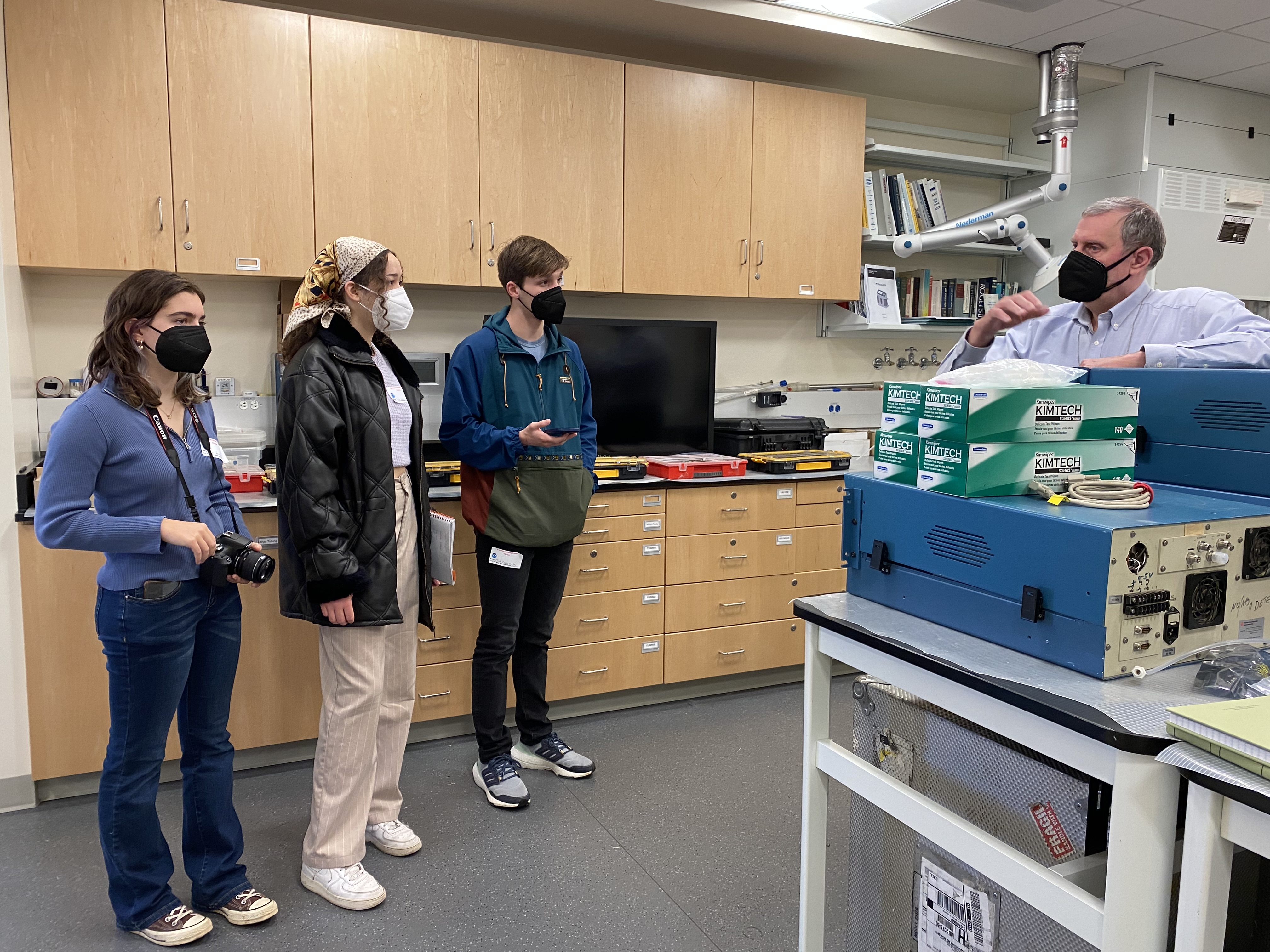 John Kochendorfer gave a talk to a dozen UofA students for a class on climate change, and gave an overview of climate science and ARL’s climate measurements.

Abstract: Soil moisture directly affects operational hydrology, food security, ecosystem services, and the climate system. However, the adoption of soil moisture data has been slow due to inconsistent data collection, poor standardization, and typically short record duration. Soil moisture, or quantitatively volumetric soil water content (SWC), is measured using buried, in situ sensors that infer SWC from an electromagnetic response. This signal can vary considerably with local site conditions such as clay content and mineralogy, soil salinity or bulk electrical conductivity, and soil temperature; each of these can have varying impacts depending on the sensor technology.

Furthermore, poor soil contact and sensor degradation can affect the quality of these readings over time. Unlike more traditional environmental sensors, there are no accepted standards, maintenance practices, or quality controls for SWC data. As such, SWC is a challenging measurement for many environmental monitoring networks to implement. Here, we attempt to establish a community-based standard of practice for in situ SWC sensors so that future research and applications have consistent guidance on site selection, sensor installation, data interpretation, and long-term maintenance of monitoring stations.

The videography focuses on a multi-agency consensus of best-practices and recommendations for the installation of in situ SWC sensors. This paper presents an overview of this protocol along with the various steps essential for high-quality and long-term SWC data collection. This protocol will be of use to scientists and engineers hoping to deploy a single station or an entire network.

Abstract: To better understand the characteristics of aerosol activation ability and optical properties, a comprehensive airborne campaign was conducted over the North China Plain (NCP) from 8 May to 11 June 2016. Vertical profiles of cloud condensation nuclei (CCN) number concentration (NCCN) and aerosol optical properties were measured simultaneously. Seventy-two-hour air mass back trajectories show that during the campaign, the measurement region was mainly influenced by air masses from the northwest and southeast. Air mass sources, temperature structure, anthropogenic emissions, and terrain distribution are factors influencing NCCN profiles. Cloud condensation nuclei spectra suggest that the ability of aerosol to activate into CCN is stronger in southeasterly air masses than in northwesterly air masses and stronger in the free atmosphere than near the surface. Vertical distributions of the aerosol scattering Ångström exponent (SAE) indicate that aerosols near the surface mainly originate from primary emissions consisting of more fine particles. The long-distance transport decreases SAE and makes it vary more in the free troposphere than near the surface. To parameterize NCCN, the equation is used to fit the relationship between NCCN and the aerosol scattering coefficient (σ) at 450 nm. The fitting parameters β and γ have linear relationships with the SAE. Empirical estimates of NCCN at 0.7 % water vapor supersaturation (SS) from aerosol optical properties are thus retrieved for the two air masses: for northwesterly air masses and for southeasterly air masses. The estimated NCCN at 0.7 % SS agrees with that measured, although the performance differs between low and high concentrations in the two air masses. The results highlight the important impact of aerosol sources on the empirical estimate of NCCN from aerosol optical properties.