ASMD
The Impact of Hurricane Dorian on the U.S. Climate Reference Network (USCRN) 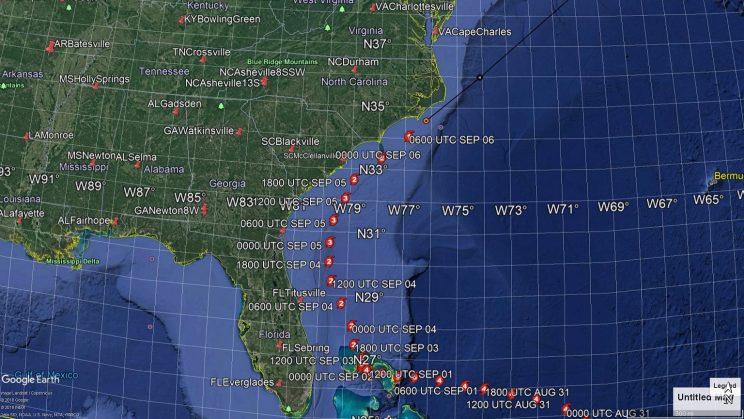 The following is reported by Dr. Howard Diamond, the USCRN Program Manager. During the North Atlantic hurricane season, USCRN stations from southern Texas all the way around the Gulf of Mexico, and up the Atlantic seaboard from Florida to Maine are susceptible to effects and impacts from tropical storms and hurricanes, and in the case of Hurricane Dorian, this was indeed the case. While six USCRN stations in Florida, Georgia, South Carolina, North Carolina, and Virginia fell within about 150 miles of the center of Dorian, as the storm moved north it’s radius increased and so the effects from the storm became greater as it moved north (USCRN sites are depicted as red pushpins on the accompanying graphic). The closest station to Dorian while it was a category 2 storm on September 5th was the McClellanville, SC site (only 44 miles away from the center of Dorian at its closest point) which received a very significant 2-day total of 12.44 inches of rain; also, that site recorded 10.84 inches of rain in less than a 24-hour period from Sep 4-5, breaking the previous 24-hour station record there of 6.57″ inches on November 21, 2005. McClellanville also had the largest one-hour rainfall amount recorded at that station of 2.17 inches, and also recorded a high wind gust speed of 27 miles per hour (mph). The station in Titusville, FL (near Cape Canaveral) recorded a peak wind gust speed of 33 mph but only received 2.36 inches of rain as Dorian was about 88 miles due east of Titusville as a category 2 storm, but one with a smaller radius at the time. As Dorian began its exit out to the North Atlantic the Cape Charles, VA recorded a peak wind gust speed of 28 mph at 7:00 am EDT on September 7th, but recorded a very minimal rainfall amount of 0.61 inches. All USCRN stations in the path of Hurricane Dorian continued to successfully operate throughout the event and no damage was experienced at any of the USCRN stations in Dorian’s path.