Dr. Howard Diamond, the Climate Science Program Manager for ARL, reports that Hurricane Sally made landfall as a very strong Category 2 storm with maximum sustained winds of 105 miles per hour (mph) early in the morning of Wednesday September 16, 2020, just east of Mobile Bay, Alabama. Sally’s landfall was approximately 35 miles south of the USCRN station in Fairhope, AL; the Fairhope station received a total of 12.32 inches rain over the 4-day period from Sep 13-16, with the greatest amount (6.58 inches) occurring on Sep 16. Due to its robust engineering, the station in Fairhope remained up and running during the entire event, and the significance of this is in the ability to capture data from a climate extreme event such as Hurricane Sally. The slow forward speed of Sally created considerable rainfall: in Pensacola, FL, which was in the most severe part of the storm to the east of Fairhope, they recorded a record one-day total of 18.17 inches of rain. The other USCRN stations (represented by red pushpins) closest to the path of Sally (represented by the blackline) were in Selma, AL, both stations in Newton, GA; Watkinsville, GA; Blackville, SC; McClellanville, SC, Blackville, SC; and Durham, NC. All the USCRN stations in the path of Hurricane Sally performed well with no problems experienced. 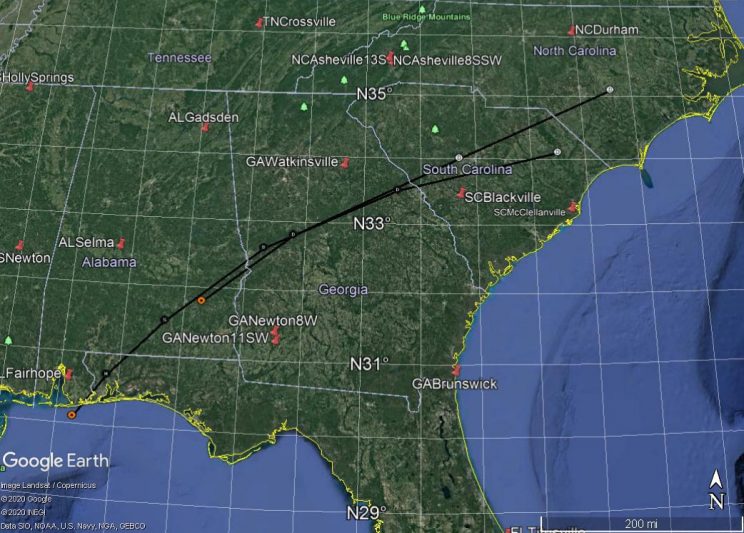 Track of Hurricane Sally in relation to USCRN stations Sept 16-17, 2020. Pins are CRN Stations, black line is path of Sally.

Wildfire smoke from the west coast was detected over the Baltimore-Washington region during a research flight conducted on Wednesday, September 16, 2020. High concentrations of carbon monoxide and fine particles were observed in a pollution layer between 2.5 and 3.8 km above the ground level. A high carbon monoxide to carbon dioxide enhancement ratio of 14% (compared to a typical ratio of 0.5% in urban plumes) suggests incomplete combustion in the wildfire in the west coast. Photochemistry in the smoke was very active and ozone concentration up to 100 parts per billion (ppb) of ozone was observed in the smoke, well above the US EPA’s 8-hour ozone standard of 70 ppb. The aircraft measurements of the wildfire smoke are consistent with the satellite and ground-based micro-pulse LIDAR observations. 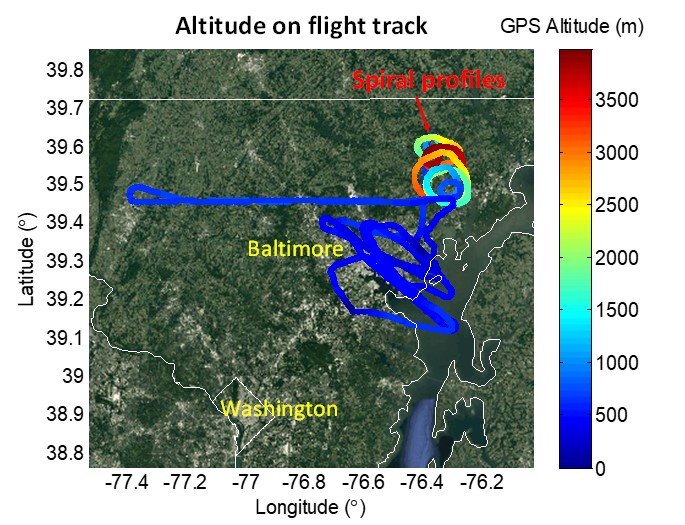 Flight track with colors denoting altitude during a research flight on September 16, 2020.

Nebila Lichiheb will present a poster during the sixth annual Intelligence Community Academic Research Symposium (ICARS). Her poster, “Improving the Prediction of Hazardous Material Dispersion in an Urban Environment” is scheduled for Wednesday, September 23rd at 1:40 pm. The presentation will focus on the description and analysis of data from the two DCNet stations in the U.S. Department of Commerce Herbert C. Hoover Building (HCHB) for the period 2017-2019 in order to identify the key variables controlling dispersion model calculations. A comparison to regional NWS (National Weather Service) stations will be also presented to document the representativeness of the HCHB observations.