HQ
ARL’s HYSPLIT group presented “Then and Now: How HYSPLIT Changed the Course of Transport and Dispersion Modeling and Fundamentally Embedded Itself into both Research and Operational Decision-Making” at NOAA’s first General Modeling Meeting and Fair in College Park, Maryland. Coordinated by Dr. Alice Crawford, this exhibit on September 11 featured work by the entire HYSPLIT team; summarily guiding participants through the 30+ years of development highlights that propelled HYSPLIT into its current position as one of the most extensively used transport and dispersion models in the atmospheric sciences community.

Barbara Stunder delivered code for hysplit.v7.6.0 to the National Centers for Environmental Prediction (NCEP) Central Operations (NCO), to be implemented coinciding with the Global Forecast System (GFS) upgrade to the global Finite Volume Cubed-Sphere dynamical core (FV3) model, planned for January 2019. There is no change to the HYSPLIT model, but in the HYSPLIT-formatted gfs/gdas files, total accumulated precipitation replaces six-hour accumulation and in the quarter-degree GFS HYSPLIT-formatted files, vertical velocity is added. With this implementation, NCEP will continue to use filenames “gfs” and “gdas”. Note that implementation of hysplit.v7.5.0, changing the GFS half-degree to quarter-degree and adding High-Resolution Rapid Refresh (HRRR), has been delayed numerous times by NCEP and is currently scheduled for implementation in mid-November 2018.

Experimental dispersion ensemble products for fire smoke concentrations are now available at https://www.ready.noaa.gov/smoke-bin/ensmoke.py. Currently, HYSPLIT operational products for the National Weather Service (NWS) are deterministic. Depending on the situation, the products may contain significant uncertainties which are not estimated or properly conveyed. Dispersion model ensemble members can be used to create a variety of dispersion model ensemble products. The products complement the current deterministic model output by providing additional information about the model variability and the probability of occurrence of hazardous levels of material in the atmosphere.

FRD
FRD staff are collaborating with biologists affiliated with the Idaho National Laboratory (INL) to investigate meteorological factors affecting the spread of white-nose syndrome in bats. The INL and surrounding areas contain a number of caves where bats hibernate in the winter. Recent research indicates that bats intermittently become active during their hibernation period and fly outside the caves, and these active periods are correlated with weather changes. This cold-season activity appears to be linked to the spread of white-nose syndrome. FRD operates meteorological towers near the caves in Southeast Idaho, so the meteorological observations can be combined with acoustic observations of bat activity to better understand the effects of weather on bat hibernation behavior.

FRD’s new five-year agreement with the Department of Energy’s Idaho Operations Office has now been cleared by both the Departments of Energy and Commerce and will go into effect in October 2018.

On September 14, Michael Buban, Temple Lee and Ed Dumas visited the University of Tennessee (UT) to present a seminar on the use of small Unmanned Aircraft Systems (sUAS) at ATDD. The seminar focused on our work on making high-resolution measurements of the Earth’s lower boundary layer and surface, and on testing and validating new meteorological sensors. ATDD’s scientists toured the UT National Institute for Mathematical and Biological Synthesis (NIMBioS) facilities and learned about their sUAS capabilities. We then discussed potential future collaborations with UT faculty and invited them to watch an upcoming test of new sUAS equipment.

Status of U.S. Climate Reference Network (USCRN) Stations and Hurricane Florence: As of 5:00 a.m. EDT on September 14, Hurricane Florence made landfall near Wilmington, North Carolina. The storm is now a Category 1 storm with maximum sustained winds of 90 miles per hour. The track of the center of circulation of Florence takes it relatively close to (e.g. within 100 miles of) the following USCRN stations over the next 5-6 days: McClellanville and Blackville, SC; Asheville, NC; Elkins, WV; Wooster, OH; Ithaca and Millbrook, NY; and Durham, NH (shown below). The extent of the storm is obviously a lot greater than the center of circulation, but that is the best gauge of possible impacts. Prior to the storm, all rain gauges were checked for water levels and drained appropriately so that they would not overflow with the rainfall from Florence. At this time, we anticipate no problems with the USCRN stations near the track of Florence. As of 7:00 a.m. EDT on September 14, all USCRN stations were operating normally with no issues to report. For more information, please contact Howard Diamond at 301-427-2475. 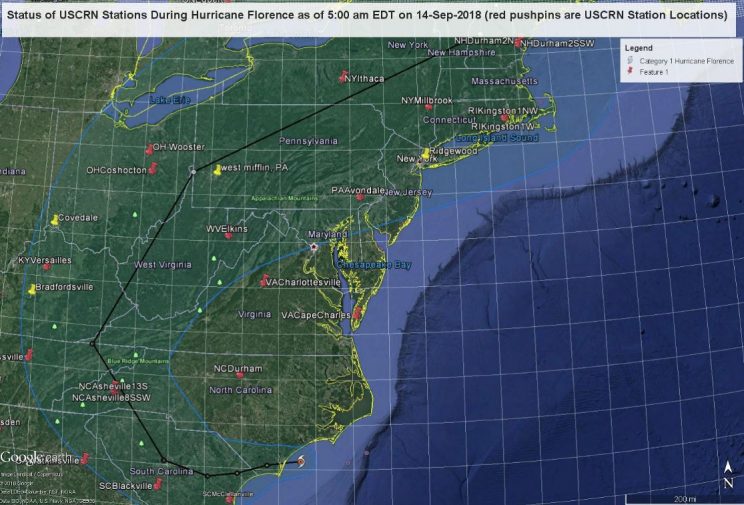