In the inter-model comparison study for summer 2020, the NOAA NAQFC was leading the Canadian and European operational centers in surface ozone forecast for all three summer months; however, EU led in the forecasting of concentration of surface particulate matter (PM) for all those same months. Experts seemed to agree that chemical data assimilation conducted in EU operations center – but not the other two national centers, made EU the winner in the PM forecast. More than 60 national forecaster attendees from over 20 states showed their enthusiasm and appreciation for the NAQFC service that reliably gave them an information-driven AQ advisory issuance tool.

Dr. D. Koch, Division Director for NOAA’s NWS Office of Science and Technology Modeling Program, gave the opening remarks for the 2 day conference welcoming the conferees with the welcome news that NAQFC has been doing well in performance statistics and continues to acquire higher forecast accuracy skill. Many forecasters agreed with Dr. Koch and presented their feedback in using NAQFC. The meeting was well regarded and gathered suggestions for improvements to pin-point-specific location forecasting.

Revised HYSPLIT code was given to NCEP on October 8, 2020 (NCEP HYSPLIT version number v7.8.0). Implementation is planned for early February 2021, coinciding with NCEP’s upgrade to the Global Forecast System (GFS) and Global Data Assimilation System (GDAS) models. The impact of NCEP’s GFS/GDAS upgrade, which includes improvements such as to the model physics, and a doubling of the number of model levels, and increase in model top height, is that the team is reevaluating its current quarter-degree native model hybrid-level archive. The team will start a higher 3-d spatial resolution and higher temporal resolution analysis archive including at least all the model hybrid levels in the boundary layer. The revised code was limited to only what was necessary to keep up with NCEP’s changes to the GFS/GDAS model output. For the quarter-degree HYSPLIT files specifically (named e.g. hysplit.t00z.gfs0p25f000), the code was revised to use NCEP’s revised unified post-processor and to selectively choose certain model output hybrid levels. Previously the lowest 55 out of 64 levels were retrieved, but now with a doubling of the number of levels, the 55 levels were chosen to maintain continuity. Changes to NCEP’s traditional pressure-level output had a minimal effect on the HYSPLIT suite at NCEP.

Dr. Howard Diamond, the Climate Science Program Manager for ARL reports that Hurricane Delta made landfall as a very strong Category 2 storm with maximum sustained winds of 100 miles per hour (mph) on the evening of Friday October 9, 2020 near Creole, LA.  Delta’s landfall was about 80 southwest of the USCRN station in Lafayette, LA, and recorded a total of 3.35 inches of rain. Due to its robust engineering, the station in Lafayette remained up and running during the entire event, allowing the CRN to capture data from a climate extreme event such as Hurricane Delta.  The USCRN stations in Monroe, LA and Holly Springs, MS were closer to Delta (41 and 32 miles respectively), and each station received respectively 4.48 inches and 1.42 inches of rain. The storm significantly weakened soon after landfall and we do not experience any performance problems with these and other stations in the path of Hurricane Delta. This was the sixth tropical storm or hurricane to make landfall in Louisiana alone this season, and through now, all USCRN stations in the region have operated flawlessly. 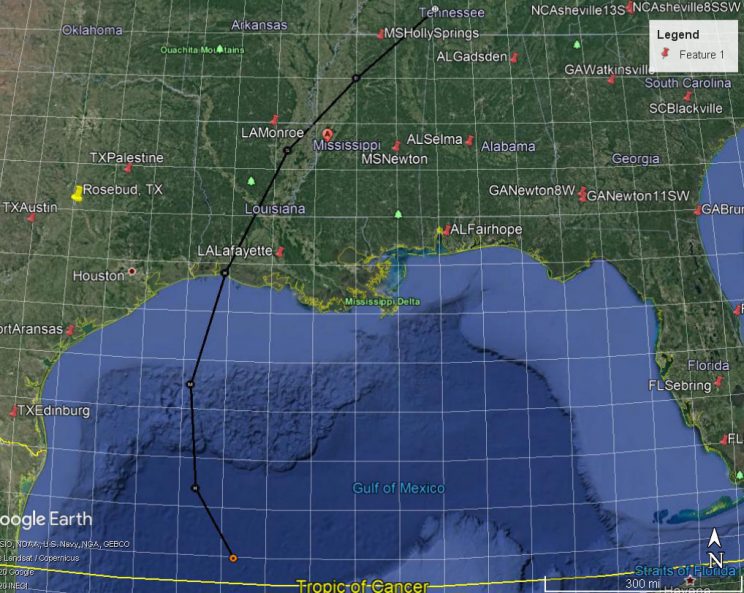 Predicted Path of Hurricane Delta in black and US CRN Stations shown as red pins. Path is as of Oct 8, 2020.

ATDD scientists Michael Buban, Temple Lee, and C. Bruce Baker had a paper titled “A Comparison of the US Climate Reference Network precipitation data to the Parameter-elevation Regressions on Independent Slopes Model (PRISM)” published in the most recent issue of the Journal of Hydrometeorology. This study compared the PRISM model to the USCRN observation network of precipitation measurements, finding excellent agreement between the two datasets and enables the development of a new gridded soil moisture product. Going forward, this new product will allow for analysis and forecasting of drought and flood conditions over the CONUS and aid in short-term weather forecasts via incorporation into numerical weather prediction models. https://doi.org/10.1175/JHM-D-19-0232.1

The paper “Gaseous Elemental Mercury Concentrations along the Northern Gulf of Mexico Using Passive Air Sampling, with a Comparison to Active Sampling,” led by Byunggwon Jeon,  and including ARL researchers Winston T. Luke, Mark Cohen, Xinrong Ren, and Paul Kelley has been published in the journal Atmosphere as part of a special issue on “Atmospheric Mercury Monitoring, Analysis, and Chemistry: New Insights and Progress toward Minamata Convention Goals”  The investigation evaluated the performance of passive samplers for gaseous elemental mercury (GEM) for ~4 weeks during each season from spring 2019 to winter 2020 at six locations along the northern Gulf of Mexico, where the pollutant is of particular concern due to high mercury wet deposition rates and high concentrations in local seafood. The objective was not only to evaluate spatial and seasonal trends along the Mississippi and Alabama coast, but also to compare active and passive sampling methods for GEM. Higher GEM levels were observed in winter (1.53 ± 0.03 ng m−3) compared to other seasons at all sites; with the general pattern being: winter > spring > summer ≈ fall. Average GEM concentrations for all deployments combined were highest at Bay St. Louis, MS (1.36 ± 0.05 ng m−3), the western-most site nearest the New Orleans metropolitan area, and lowest at Cedar Point, MS (1.07 ± 0.09 ng m−3), a coastal marsh with extensive vegetation that can uptake GEM. Both the passive and active sampling methods showed the same seasonal trends and the difference between them for each season was <15%, acceptable for evaluating larger spatial and temporal trends. Overall, this work demonstrates that passive samplers can provide insight into GEM levels and the factors affecting them along coastal regions. https://doi.org/10.3390/atmos11101034