ASMD
A paper titled ”The evaluation of mixing methods in HYSPLIT using measurements from controlled tracer experiments” authored by Fong Ngan, Christopher P. Loughner, and Ariel Stein, has been accepted for publication in Atmospheric Environment. In this paper, we evaluated the turbulent mixing methods available in HYSPLIT and their impacts on dispersion results as compared against Project Sagebrush Phase 1 which offers a unique set of observations for the comparison of both turbulent velocity variance and tracer concentration. The HYSPLIT simulations using different mixing methods were also conducted for CAPTEX which aimed to simulate the long-range transport and diffusion of pollutants. The evaluations of dispersion results with measured concentrations provide the insight to assess the performance of different turbulent mixing methods. The paper is available online:

ATDD
USCRN Outreach in Alaska: Mark Hall, Brandon McCloy, Mike Rutherford, and local contractor/teammate Chuck Lindsay recently installed a U.S. Climate Reference Network station in Aleknagik, Alaska. Aleknagik is approximately 16 miles northwest of Dillingham and has a population of around 250 people. Mark made arrangements with Mayor Kay Andrews for a tour of the completed station. Ms. Andrews brought along several high school students and their science teacher, Ryan Hickel, from Aleknagik School to see the completed station. During their visit, Mark gave an overview of how the USCRN station works, explained what measurements are taken, and talked about the importance of gathering high quality climate data in stable settings such as this one in Aleknagik. Mark also gave Mr. Hickel an in-depth overview of the Geonor rain gauge so that he can serve as a local contact to empty the rain gauge bucket on the rare occasion that it approaches maximum capacity. This was the 23rd of 29 USCRN stations to be installed in Alaska. 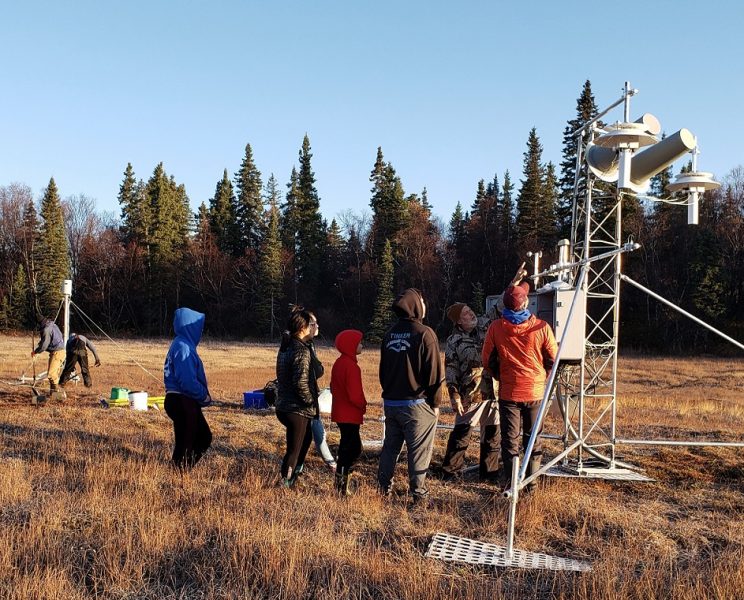