ASMD
Dr. Howard Diamond, in his role in fielding climate-related inquiries received via the NOAA Climate Portal, was connected with Mr. Chris Mooney, a journalist at the Washington Post who writes about energy and the environment. Mr. Mooney was doing an article, as part of a series of global hotspots, on a particularly anomalously warm area of sea surface temperatures (SST) off the coast of southern Angola in the southeastern Atlantic near a city named Tombwa. Mr. Mooney was using NOAA’s high-resolution (with 1/4 degree resolution) Optimum Interpolation Sea Surface Temperature version2 (OISSTv2) dataset, and he was looking for some validation of what he was seeing about a marine hotspot off the coast of Tombwa. This is part of the Washington Post’s series on global hotspots, and they even sent a reporter there to do some of the ground validation of the effects of this warm anomaly. A link to the article from the Washington Post, published on November 27th, can be found at https://www.washingtonpost.com/graphics/2019/world/climate-environment/angola-climate-change/, and below is a copy of the plot of SST anomalies that Dr. Diamond provided which assisted in the validation process. It very much replicates the plot in the article showing an anomaly in the neighborhood of +2º Celsius; and this, in addition to using peer reviewed literature, gave Mr. Mooney all the solid evidence and high confidence he needed to move forward with publishing his story. 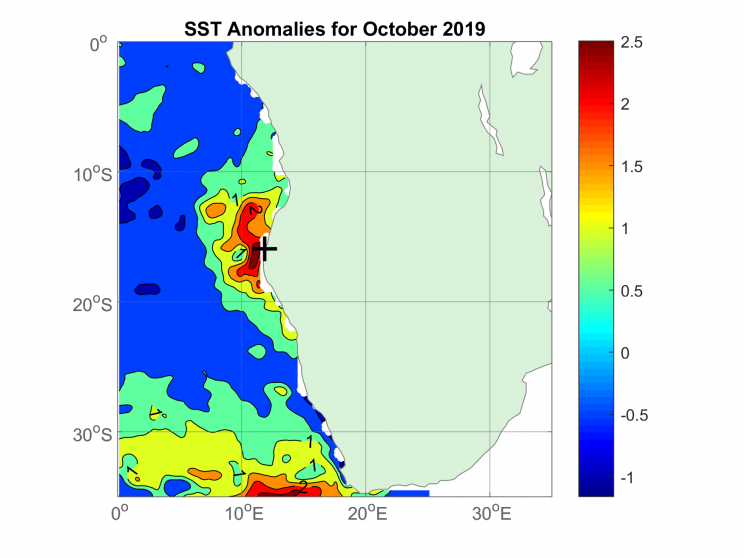