Howard Diamond attended a meeting in Dublin, Ireland, from November 1-3, where he chaired a World Meteorological Organization and Global Climate Observing System (GCOS) Task Team on a GCOS Surface Reference Network (GSRN). The Task Team was created by the GCOS Atmospheric Observations Panel for Climate (AOPC) in order to investigate and develop a roadmap and plan towards the possible and practical implementation of what would be required to develop such a global network. The precepts and philosophy of the U.S. Climate Reference Network (USCRN), which Howard manages, is an example of what a potential global reference surface network could look like. In addition to Howard, the Task Team membership constitutes a very diverse group of global observing experts from Australia, China, Germany, Ireland, Italy, Morocco, New Zealand, and the United Kingdom. The Task Team has a 2.5 year term to deliver a final report to the AOPC by March 2020; the first deliverable will be a presentation of the initial results of this meeting and a way forward that Howard will present to the AOPC at its next meeting in Offenbach, Germany, from March 6-9, 2018. The Task Team meeting was very successful, as there was a good discussion of the issues, and people were dedicated to seeing positive results to the benefit of the global climate community.

ATDD hosted an in-person meeting in Oak Ridge, TN on November 15-16 with all the people involved in all aspects of the U.S. Climate Reference Network (USCRN) Program from both ATDD as well as from the National Centers for Environmental Information in Asheville, NC. There were over 15 people involved in discussing a number of observational issues ranging from the demonstration of a new gridded data product, sensor performance, testing and operational methodologies, monitoring, quality control, and metadata, to USCRN testbed operations. The meeting was very successful and the program manager, Howard Diamond, will use the action items generated and documented to assist in moving several issues forward and this will assist in guiding the monthly program teleconferences. See attached group photo taken in front of ATDD. 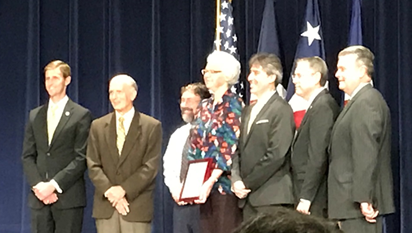 On Tuesday, Glenn Rolph, Ariel Stein, Barbara Stunder, Mark Cohen, and Roland Draxler were presented with the 2017 NOAA Technology Transfer Award in Silver Spring, MD. This award is presented to the team for their exceptional work in transferring the HYSPLIT dispersion model to first responders, emergency planners, academia, and other government agencies. Congratulations to the team!

Alice Crawford attended the DOE ashfall project meeting in Richland, WA on November 7-8. The project is a collaboration between DOE, NOAA, USGS and DRI (Desert Research Institute) to estimate concentrations of airborne ash that might be expected at the DOE Hanford site if an eruption of Mount St. Helens were to occur.

Alice Crawford will be giving a seminar at University of Maryland, Atmospheric and Ocean Science department on November 30.
https://www.atmos.umd.edu/seminar/

On November 13, Dr. Ariel Stein participated in the Urban Dispersion Virtual Workshop: Designing the Next Generation Urban Dispersion Field Programs. The main objective of the workshop was to design and execute the next generation of Urban Dispersion field programs to address emergency response needs.

Drs. Ariel Stein and Pius Lee presented work progress to a dozen program reviewers of the National Air Quality Forecasting Capability (NAQFC). The reviewers conferred annually to evaluate progress and contribute direction for the NAQFC forecasting service. ARL has been the primary NAQFC developer since the inception of NAQFC in 2003. ARL provides cutting-edge modeling science and software development for the forecast modeling system. ARL leverages advancements in air chemistry, meteorology, emission, and evaluation disciplines from other NOAA laboratories, federal institutions, and the academia to ensure adoption of the best science, computation efficiency and accuracy for the NAQFC. New emphasis of the next era regional air chemistry model that forms the center piece of NAQFC should play a dual role to serve both regional and global atmospheric composition models. Through the one and a half decade long NAQFC development responsibility, ARL has accumulated a wealth of knowledge on air composition characteristics over the USA. The reviewers encouraged that this knowledge could be integrated into the NOAA global air chemistry and climate influence sciences. They also encouraged ARL to have a stronger involvement in the development of the Next Generation Global Prediction System (NGGPS).

The fall semiannual maintenance on the NOAA/INL Mesonet is wrapping up just as the weather is going downhill. One station at Hamer, Idaho has a recurring problem with loose soil washing out during the spring snowmelt. This has put fencing and equipment in danger of toppling over. Devin Clinger and Adam Haggerty will be shoring up the soil at the station with a backhoe to mitigate problems next spring. A more permanent solution is also under investigation using railroad ties or other support structures.

Jason Rich gave a presentation to the INL Winter Safety Forum on Wednesday. In addition to providing general safety tips for winter activities, Jason also discussed the regional outlook for this coming winter based on the expected La Niña.

James Wood and Walt Schalk completed Fall calibration/verifications on five stations of the Nevada National Security Site (NNSS) SORD mesonet. This activity will continue over the next two weeks.

Desert Rock Weather Observatory, NNSS (DRA) Tour: Walt Schalk and James Wood hosted a tour of about 15 scientists each from the DOE National Laboratories. The tour was part of the Federal Expertise Training program hosted by NNSA. The tour took place at the Desert Rock Weather Observatory at the Nevada National Security Site. A verbal history of the SORD program and support of the testing program was given. SORD’s current activities were also presented. The numerous instrumented sites that SORD maintains for NNSS Programs (SODAR, mesonet and lightning detection network) and hosts for a variety of NOAA Programs (Climate Reference Network, SURFRAD, GPS Water Vapor soundings – ESRL) located in the immediate Desert Rock area were discussed. As a finale, a Pilot Balloon (PIBAL) release was demonstrated.

James Wood provided specific point forecasts for an experiment that was conducted on the NNSS this week. James and Walt participated in the daily Plan of the Day meetings where the forecast was provided and any questions were answered. Particular items of interest were lightning and winds. The experiment time line was accelerated as a result of the forecast for a significant weather system moving into the area that was expected (and did) bring strong winds to the NNSS. The NNSS mesonet measured 15-min averaged winds from 25-35 mph and gusts to 50 mph for several hours on Thursday.