ASMD
As part of his on-going climate work, Dr. Howard Diamond recently completed an update to the Southwest Pacific Enhanced Archive for Tropical Cyclones (SPEArTC) dataset which includes best tracks data for tropical cyclones in the southwest Pacific (the area of the globe south of the equator and from longitude 120º West to 135º East) from 1841 to the present. The SPEArTC project (see http://apdrc.soest.hawaii.edu/projects/speartc/) is an outgrowth of Dr. Diamond’s participation as a member of NOAA’s International Best Tracks Archive for Climate Stewardship (IBTrACS; see https://www.ncdc.noaa.gov/ibtracs/) effort; and this dataset was a product of his PhD research that developed a long-term tropical cyclone climatology for the region [see https://researchspace.auckland.ac.nz/handle/2292/23494 for more on that research effort]. IBTrACS is NOAA’s official global tropical cyclone database, and the SPEArTC effort is an outgrowth and extension of that which is more tailored for the southwest Pacific region. SPEArTC has become a popular dataset for use in the region, and has been cited in a number of peer reviewed papers from the following paper – Diamond, et al. 2012¹. The tropical cyclone season in this basin is formally from November 1st to April 30th; and as such, Dr. Diamond has worked with several agencies in the region to update the SPEArTC dataset for the 2018/19 season which ended on April 30, 2019. As of this time, there are nearly 300 registered users for the dataset, and all of the users have been notified of the update, and were provided with this best tracks plot for the 2018/19 season. 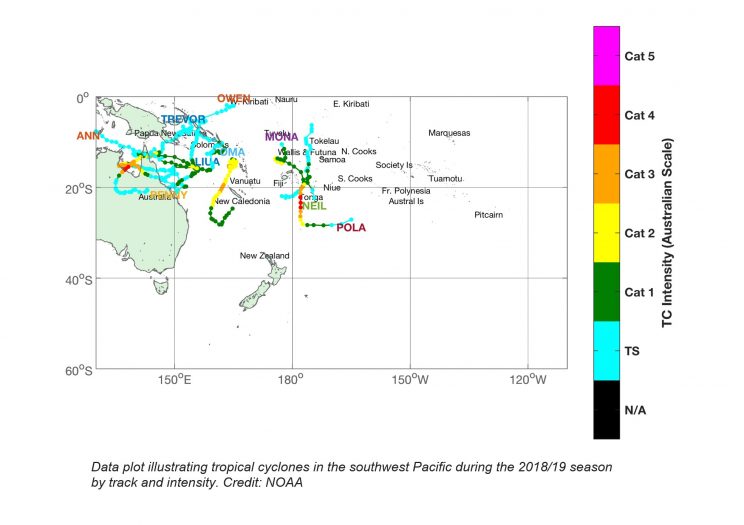 ATDD
From 29-31 Oct, Temple Lee and Bruce Baker attended a workshop on small unmanned aircraft system (sUAS) in Norman, OK hosted by CIMMS. The workshop was entitled “Current and Future Uses of Unmanned Aircraft Systems (UASs) for Improved Forecasts/Warnings and Other Scientific Studies.” Temple presented an overview of sUAS research in ARL, “Developing Capabilities for Low-Altitude Rotary and Fixed Wing sUAS to fill a Critical Gap in Boundary Layer Observations,” and was a rapporteur for one of the breakout sessions. He moderated another breakout session to discuss paths forward for better using sUAS observations to understand boundary layer processes and support numerical modeling efforts. In addition, Temple is serving on the UAS steering committee and will coauthor a manuscript for the Bulletin of the American Meteorological Society (BAMS) on workshop outcomes.

LaToya Myles participated in the American Geophysical Union (AGU) Honors and Recognition Committee Meeting at AGU Headquarters in Washington, DC on October 29-30. The committee maintains oversight of AGU’s honors and recognition programs at all levels – across the 25 sections and at the Union level with fellows, awards, medals, and prizes.

Nebila Lichiheb was selected to receive an AGU Biogeosciences Section Caregiver Support Award, which provides a travel grant to early-career scientists to help defray the costs of attending the fall meeting.

Rick Saylor attended the Geophysical Fluid Dynamics Laboratory’s external laboratory review held at Princeton University on October 29-31 in Princeton, New Jersey. OAR laboratories hold external reviews every five years to obtain feedback on the lab’s scientific direction, its quality, and its alignment with NOAA’s mission and OAR goals and objectives. ARL is scheduled to have its next external review in 2021.

Bruce Baker, Rick Saylor, and Howard Diamond’s abstract submission to the Climate Program Office’s Climate Connections event on November 20-21, 2019 at the Silver Spring Civic Building in Silver Spring, MD has been selected for a poster session and is entitled: “Climate Observing Systems: Where Are We and Where Do We Need to be in the Future?” The poster will be emphasizing the importance of a long term observing network for detecting changes in the arctic, drought, and climate variability. Rick Saylor will present the poster.