Atmospheric Deposition Meeting: Winston Luke attended the spring 2020 meeting of the National Atmospheric Deposition Program (NADP) from May 11-14. Originally to be held in Madison, Wisconsin, the meeting was instead attended virtually by over 80 participants. Dr. Luke serves as the Vice Chair of the Network Operations Subcommittee (NOS). NADP is a cooperative program comprised of five monitoring networks and over 500 independent sites that provide long-term, high-quality air and precipitation measurements to evaluate atmospheric deposition over space and time. NADP’s Executive Committee instructs program direction based on recommendations from its five subcommittees (two technical and three science). Existing science subcommittees include Critical Loads of Atmospheric Deposition (CLAD), Total Deposition (TDep), and the Aeroallergen Monitoring Science Committee (AMSC).

An ad hoc science subcommittee, Mercury in the Environment and Links to Deposition (MELD), was formed in 2019. Dr. Luke and Dr. Mark Cohen participated in a two-day virtual meeting of MELD, where the major topic of discussion centered on U.S. efforts to inform the effectiveness evaluation (EE) of the Minimata Convention to limit and reduce the use of mercury globally, with concomitant reductions of mercury across all components of the environment (air, water, ecosystems, and biota). Discussions also revolved around the development of a network of low-cost mercury monitoring techniques for the EE. MELD seeks input and guidance from leading mercury scientists in academia, state and local government, and for-profit and not for profit stakeholders to synthesize and integrate NADP’s networks within this larger mission.

HYSPLIT Locust Web App: ARL’s efforts to aid in the forecasting of desert locust swarms is continuing, with new stories released by the Washington Post and Scientific American.

Air Quality Measurement Campaign: ARL scientists are continuing to measure air quality from both aircraft- and surface-based instrumentation. Xinrong Ren was interviewed by EARTHER and Reuters in between research flights. 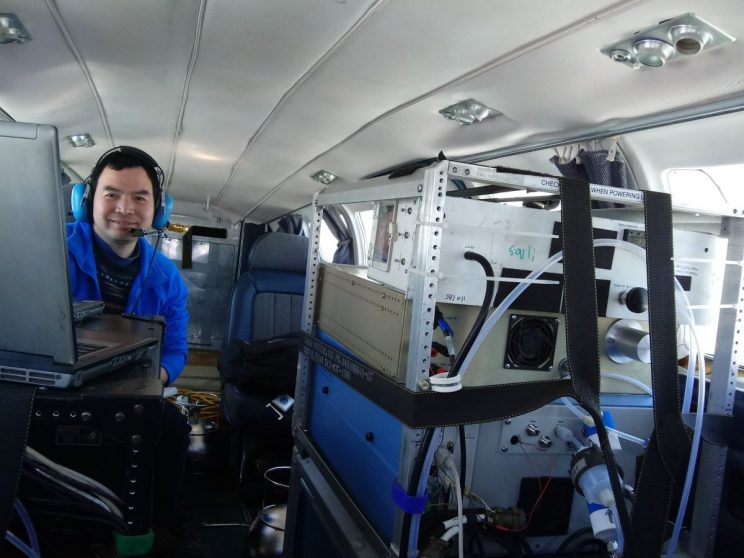 Dr. Ren with a suite of atmospheric scientific instruments in a Cessna 402 research aircraft.