Patrick Campbell was featured in the Indianapolis Star regarding ARL’s work on analyzing the recent ozone changes in Indiana due to traffic changes across the nation. The article reads, “Patrick C. Campbell, a research assistant professor at George Mason University who is affiliated with the NOAA Air Resources Laboratory, said there was an approximately 10% decrease in emissions of nitrogen oxides in Indiana in June compared to the June average of 2015 to 2019. There was also an approximately 10% increase in concentration for the maximum daily 8-hour average ozone, which is a measurement of ozone. Campbell said that these values are statewide averages and there is variability among the different regions of Indiana, where some likely saw a decrease in ozone in June.”

ORAU, working in cooperation with NOAA/ATDD, has been awarded a National Science Foundation (NSF) grant to continue work on the FOCAL (Flux Observations of Carbon from an Airborne Laboratory) project that was started nearly 10 years ago. The project’s goals are to measure the exchange of various greenhouse gases (e.g. CO2, CH4, H2O, and NO2) and their isotopologues between the surface of the Earth and the lower atmosphere over the Arctic regions of Alaska using a small, low-flying aircraft in the summers of 2021 and 2022. This work will follow-on to field work that the group first performed in Prudhoe Bay, AK in August, 2013.

Motivating the study is the analysis that the permafrost of the East Siberian Arctic Shelf (an area of about 2 million kilometers squared) is more porous than previously thought. The ocean on top and the heat from the mantle below warm the permafrost to perforate it like Swiss cheese. Methane gas stored under it under pressure to burst into the atmosphere. The amount leaking from this locale is comparable to all the methane from the rest of the world’s oceans put together. Methane is a greenhouse gas more than 30 times more potent than carbon dioxide.

A partnership was formed between Harvard University’s Anderson Group, Aurora Flight Sciences (a division of Boeing), ORAU, and NOAA/ATDD to develop sensitive instruments to measure both greenhouse gas concentrations and atmospheric turbulence. These instruments were mounted on a Diamond DA-42 Twin Star aircraft and flown over the North Slope of Alaska in 2013. This same aircraft and instruments will be used for the upcoming flights in 2021 and 2022.

For more information on the FOCAL project please visit: https://www.arl.noaa.gov/documents/reports/ARL-TM-267.pdf 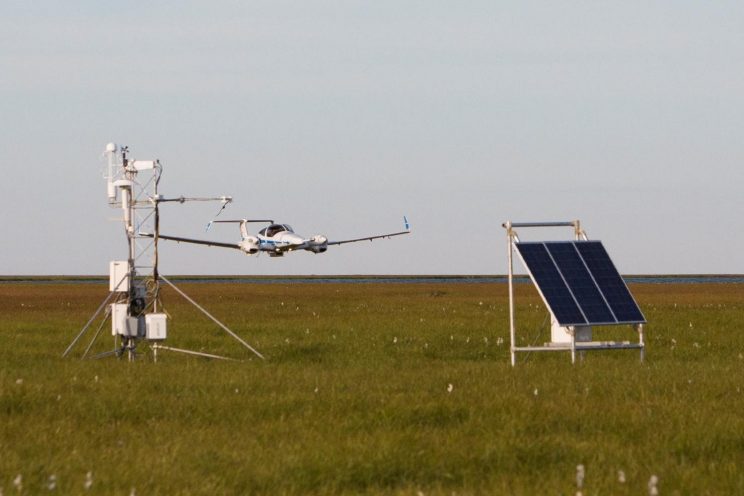 The Diamond DA-42 aircraft with the FOCAL system flying past an instrumented tower to obtain enhanced measurements around the landscape surrounding the tower in August, 2013.

The Diamond DA-42 aircraft during a typical flight, gathering both greenhouse gas concentration data and turbulence data to quantify the exchange of these gases between the Arctic surface and the lower atmosphere in August of 2013.