Nebila Lichiheb is serving as guest editor of Frontiers in Environmental Science for  a special issue entitled Land-Management Solutions for Managing Ecological and Energy Transitions.  Manuscripts are being solicited now, and are due March 19, 2022. More information about submissions is available online: Frontiers In Environmental Science.

ARL’s HYSPLIT-based locust migration application has been updated to more realistically simulate locust flights across bodies of water, based on consultations with UN Food and Agriculture Organization locust experts. As before, locust swarms are simulated to fly passively along with the wind, with user-defined take-off and landing parameters. But in the updated version, the locusts must fly until they encounter a land surface — either an island or a coast — and only then are they allowed to land. This is believed to be the general behavior of locusts when they are traversing a body of water, as they do not want to land in the water and drown. Among other parameters, the user can specify the maximum flight time allowed before the locusts must stop flying whether they’ve reached land or not (default = 72 hours), and the minimum rest period before they are allowed to take off the next day (default = 8 hours). A satellite-based land-cover gridded dataset (5 km x 5 km) was developed and integrated into the application so that the land type under a migrating swarm is known. In this way, if at the nominal landing time the swarm is not over a land surface, then it will keep flying until it encounters a land surface.

The new feature is illustrated in the figures below, for a hypothetical swarm taking off and flying for five days over the Red Sea. While not easily seen in the figure, the intermediate-day landings with the new water-landing-avoidance features in the right figure — green circles — were actually on islands. In another development, the ability of the 0.25 degree GFS meteorological data used to drive the application to simulate coastal sea-breeze phenomena was examined. Preliminary results suggest that there is a strong diurnal variation in modeled wind direction at the coastal sites examined, consistent with the expected sea-breeze behavior (i.e., a tendency towards onshore flow during the day and offshore flow at night). More details about the updates and developments reported here are provided in this brief presentation. 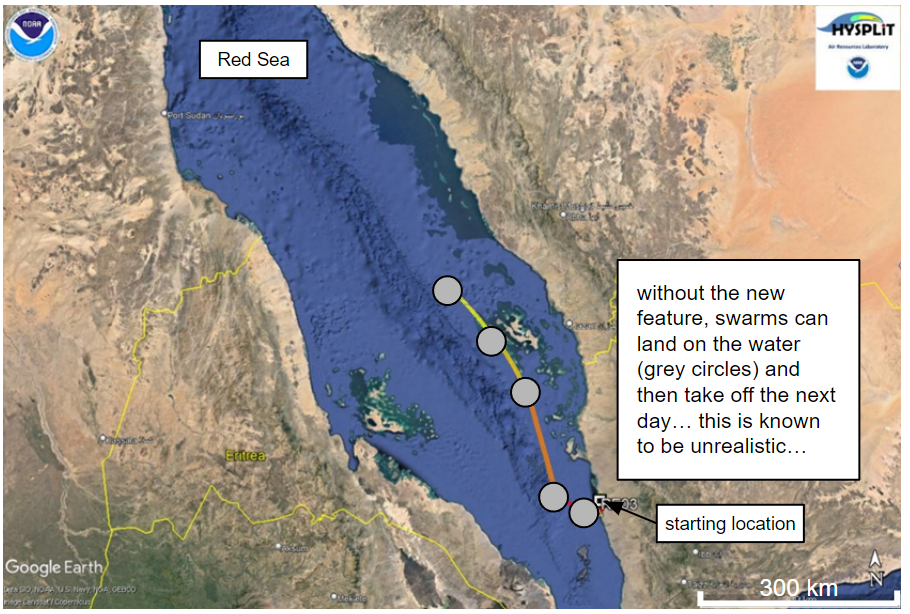 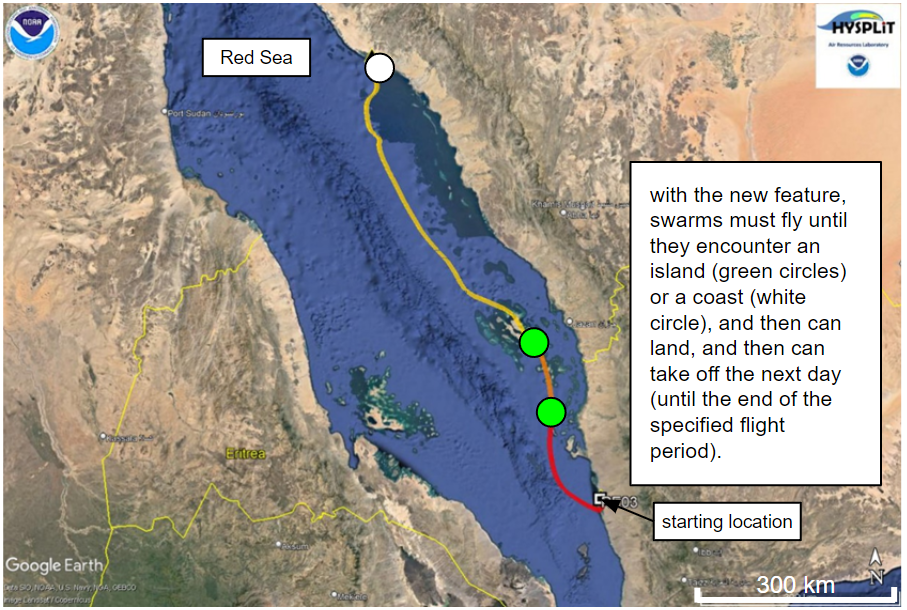