In collaboration with their colleagues from NIST, University of Maryland, and Stony Brook University, ARL’s Phil Stratton, Xinrong Ren, Paul Kelley, and Winston Luke are involved in some winter research flights to investigate greenhouse gas (GHG) emissions from the Baltimore‐Washington and Philadelphia areas. The University Research Foundation’s Cessna 402 and Purdue Duchess research aircraft have been flying over these areas to measure carbon dioxide, methane, meteorological variables, and other air pollutants. A mobile lab, called NOAA’s Air Resources Car (NOAA’s ARC) is also being deployed to make surface measurements of GHGs and meteorological parameters. Top‐down GHG emissions will be estimated based on the mass balance approach and will be compared to various emission inventories. The aircraft data will further be used for inverse modeling of GHGs. Results from this research will provide decision makers with relevant science to aid in improved quantification of anthropogenic GHG emissions through direct analysis of ambient measurements and follow-up model simulations.

SuperBowl 57 may be scheduled for Sunday, February 12 in Phoenix, Arizona, but ARL and the NWS are already preparing for game day. The HYSPLIT team has scheduled hourly automated runs for several locations across the Phoenix Metro area as an emergency management tool for local responders.

An item Howard Diamond provided data to for the USA Today Fact Checking column on the correlation between global temperatures and atmospheric CO2 levels was published. 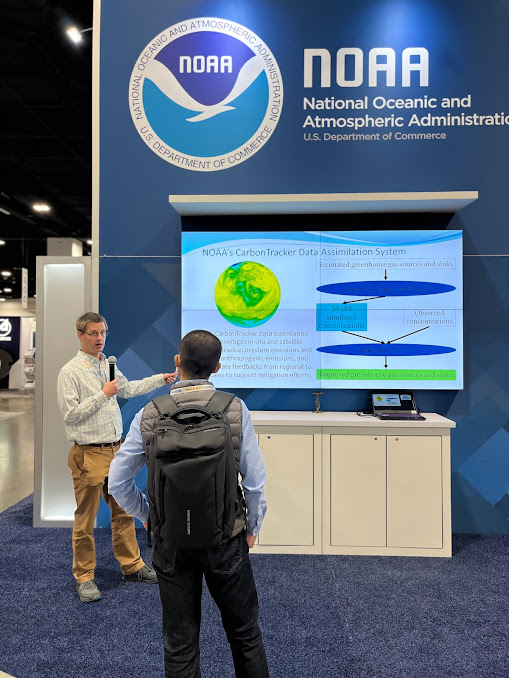 Chris Loughner at the NOAA Booth at the 2023 AMS meeting in Denver, Colorado.

ARL’s Praveena Krishnan and John Kochendorfer have joined the AMS Board on Atmospheric Biogeosciences. Membership (2023-2026) is for a three-year term. Among other responsibilities, the Board organizes the Conference on Atmospheric Bio geosciences and presents the award for Award for Outstanding Achievement in Biometeorology

Arctic-boreal landscapes are experiencing profound warming, along with changes in ecosystem moisture status and disturbance from fire. This region is of global importance in terms of carbon feedbacks to climate, yet the sign (sink or source) and magnitude of the Arctic-boreal carbon budget within recent years remains highly uncertain. Here, we provide new estimates of recent (2003–2015) vegetation gross primary productivity (GPP), ecosystem respiration (Reco), net ecosystem CO2 exchange (NEE; Reco − GPP), and terrestrial methane (CH4) emissions for the Arctic-boreal zone using a satellite data-driven process-model for northern ecosystems (TCFM-Arctic), calibrated and evaluated using measurements from >60 tower eddy covariance (EC) sites. We used TCFM-Arctic to obtain daily 1-km2 flux estimates and annual carbon budgets for the pan-Arctic-boreal region. Across the domain, the model indicated an overall average NEE sink of −850 Tg CO2-C year−1. Eurasian boreal zones, especially those in Siberia, contributed to a majority of the net sink. In contrast, the tundra biome was relatively carbon neutral (ranging from small sink to source). Regional CH4 emissions from tundra and boreal wetlands (not accounting for aquatic CH4) were estimated at 35 Tg CH4-C year−1. Accounting for additional emissions from open water aquatic bodies and from fire, using available estimates from the literature, reduced the total regional NEE sink by 21% and shifted many far northern tundra landscapes, and some boreal forests, to a net carbon source. This assessment, based on in situ observations and models, improves our understanding of the high-latitude carbon status and also indicates a continued need for integrated site-to-regional assessments to monitor the vulnerability of these ecosystems to climate change.

Published: Anthropogenic VOCs in the Long Island Sound, NY Airshed and their Role in Ozone Production

Abstract: Cities like New York and areas downwind have poor air quality due to pollution generated by human activity. Ozone (O3), a harmful pollutant, is produced in the atmosphere from photochemical reactions involving volatile organic compounds (VOCs) and nitrogen oxides (NOx). Aircraft measurements of VOCs obtained during an O3 event in May 2017 over the New York City metropolitan area, Long Island Sound, and Connecticut show concentrations of O3 exceeding 100 ppb between ∼200 and 500 m above the surface. During this campaign, 35 whole air canisters were collected, and 50 VOC species were measured. Biogenic isoprene often dominates VOC reactivity in summer months, but analysis of the chemistry in the middle of the Planetary Boundary Layer (PBL) indicates that primary anthropogenic VOCs such as propylene and isopentane played a major, possibly dominant role in this Spring 2017 O3 event and are suitable targets for control.

The most important measured anthropogenic VOCs ranked by OH reactivity were propylene and isopentane, with n-butane and 1-pentene also playing a substantial role. The most important anthropogenic VOCs ranked by Ozone Formation Potential (OFP) were again propylene and isopentane, but aromatic species like toluene were also large contributors. Isoprene ranked tenth in importance for OFP. For VOC species with short lifetimes, like isoprene and propylene, mixing of air parcels throughout the PBL means air above the surface may quickly become depleted of these VOCs, allowing longer-lived, anthropogenic VOCs to have a proportionally greater impact on photochemical O3 production aloft. Our observations indicate that VOC reactivity was much larger in the morning than in the afternoon, suggesting controls of propylene, isopentane, and aromatics overnight may be useful for reducing morning concentrations of VOCs and therefore possibly reduce maximum concentrations of O3 observed in the afternoon. Finally, because formaldehyde (HCHO) was not measured during these flights, and since oxygenates also contribute to O3 formation, we estimate the relative contribution of isoprene and propylene to HCHO formation using a box model. Propylene produces ∼25% and isoprene produces ∼4% of HCHO within the box model.

Published: VOC and Trace Gas Measurements and Ozone Chemistry Over the Chesapeake Bay During OWLETS-2

Abstract: The Ozone Water-Land Environmental Transition Study, 2018 (OWLETS-2) measured total non- methane hydrocarbons (TNMHC) and EPA PAMS Volatile Organic Compounds (VOCs) on an island site in the northern Chesapeake Bay 2.1 and 3.4 times greater in concentration, respectively, than simultaneous measurements at a land site just 13 km away across the land–water interface. Many PAMS VOCs had larger concentrations at the island site despite lower NEI emissions over the water, but most of the difference comprised species generally consistent with gasoline vapor or exhaust. Sharp chemical differences were observed between the island and mainland and the immediate air ~300 m above the water surface observed by airplane. Ozone formation potential over land was driven by propene and isoprene but toluene and hexane were dominant over the water with little isoprene observed. VOC concentrations over the water were noted to increase diurnally with an inverse pattern to land resulting in increasing NOx sensitivity over the water. Total reactive nitrogen was lower over the water than the nearby land site, but reservoir compounds (NOz) were greater. Ozone production rates were generally slow (~5 ppb hr−1) both at the surface and aloft over the water, even during periods of high ozone (>70 ppbv) at the water surface. However, specific events showed rapid ozone production >40 ppb hr−1 at the water’s surface during situations with high VOCs and sufficient NOx. VOC and photochemistry patterns at the island site were driven by marine sources south of the island, implicating marine traffic, and indicate ozone abatement strategies over land may not be similarly applicable to ozone over the water.