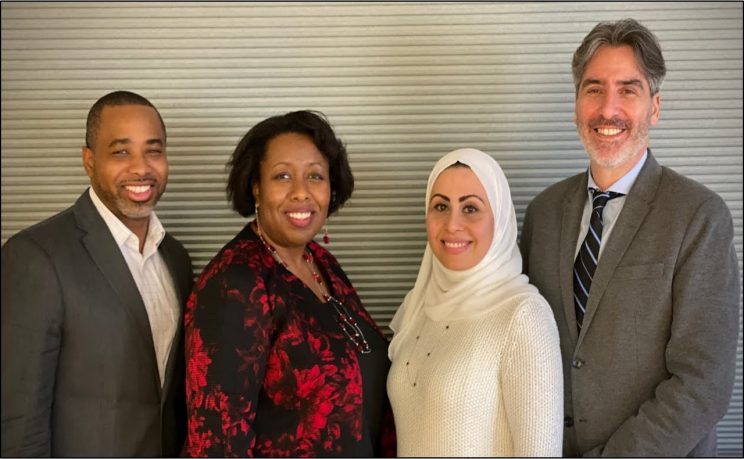 LaToya Myles was appointed to serve as chair of the American Geophysical Union (AGU) Honors and Recognition (H&R) Committee for a two-year term (2020-2022). This committee maintains oversight of AGU’s honors and recognition programs at all levels – Union awards, medals, prizes, and fellows, as well as section honors. As H&R chair, Myles will also serve on the AGU Council, which provides leadership across AGU in regards to generating and deliberating science-related ideas and advising on science and member issues.

On February 8, Xinrong Ren and his colleagues at the University of Maryland, National Institute of Standards and Technology, and Purdue University started research flights for the Fluxes of Greenhouse Gases in Maryland (FLAGG-MD) project to continue characterizing greenhouse gas (GHG) emissions from the Baltimore-Washington area. The University of Maryland’s Cessna 402B research aircraft and Purdue University’s Duchess flew over this area to measure GHGs (carbon dioxide and methane), meteorological variables, and other trace gases and aerosols. GHG emissions will be estimated based on the aircraft measurements and then compared to the emissions in state and national emission inventories. The aircraft data will also be further used for inverse modeling. The FLAGG-MD project has produced policy-relevant science that aided in improved quantification of anthropogenic GHG emissions to the scientific community and regulatory agencies such as the Maryland Department of the Environment through direct analysis of ambient measurements and model simulations.

From February 9-19, Paul Kelley and Winston Luke will travel to the Big Island of Hawaii to visit the Mauna Loa Observatory (MLO). ARL scientists measure trace gases (ozone – O3, sulfur dioxide – SO2, carbon monoxide – CO) as well as atmospheric mercury species at MLO, under the auspices of the National Atmospheric Deposition Program’s (NADP’s) Atmospheric Mercury Network (AMNet). While there, the two will perform semi-annual maintenance, repairs, and calibrations of the trace gas and aerosol monitors; train a new site operator (Ms. Michealene Iaukea-Lum) in the operation of the instrumentation; and collaborate with Dr. Akane Yamakawa from the National Institute for Environmental Studies (NIES) in Tsukuba, Japan. Dr. Yamakawa spent five months at ARL from July-December 2019 and, with the assistance of Paul Kelley, constructed a prototype sampler for the collection of gaseous oxidized mercury compounds for subsequent isotopic analysis. Mr. Kelly and Dr. Yamakawa will deploy and test the sampler at MLO, where it will remain until the end of 2020.

On February 13, Pius Lee will present “O3 production in the Mid-Atlantic region in recent years” during the Baltimore-Washington Regional Air Quality Symposium. This event is being held at the University of Maryland in College Park, Maryland.

Also on February 13, Alice Crawford will present “Probabilistic HYSPLIT Forecasts” during the Forecasting a Continuum of Environmental Threats working group meeting, which she’ll participate in via teleconference.