On February 28th, the Federal Aviation Administration’s (FAA) International Program Lead for issues such as Volcanic Ash, Karen Shelton-Mur, and people from AvMet Application, Inc., who contract to the FAA for support, visited the NOAA Center for Weather and Climate Prediction to get a tour of the Washington Volcanic Ash Advisory Center (VAAC). The tour was coordinated and conducted by Jamie Kibler, Manager of the Washington VAAC that is next door to ARL. ARL has a role in working with HYSPLIT and assisting in providing products and services to the Washington and Anchorage VAACs (Jeff Osiensky, who manages the Anchorage VAAC, attended via teleconference) to assist in their predictive and advisory work with respect to volcanic ash plumes. The group came to ARL where presentations were made by Howard Diamond on an overview of ARL. Barbara Stunder provided a detailed presentation on the processes that ARL is involved in with respect to our interactions with the VAACs, and the ARL work in continually improving HYSPLIT capabilities. Alice Crawford provided a presentation demonstrating products and services of the HYSPLIT READY web site, and the benefits of integrating observations into modeling. Both Barbara and Alice were assisted by Allison Ring. In addition, Mike Pavolonis from NESDIS/STAR, who works on integrating multiple observations for developing a suite of volcanic ash products; and Mark Zettlemoyer from the National Weather Service Aviation and Space Weather Services Branch, which is the primary NOAA focal point for collaboration on the provision and dissemination of aviation weather services with the FAA; International Civil Aviation Organization; and World Meteorological Organization, were both also in attendance. 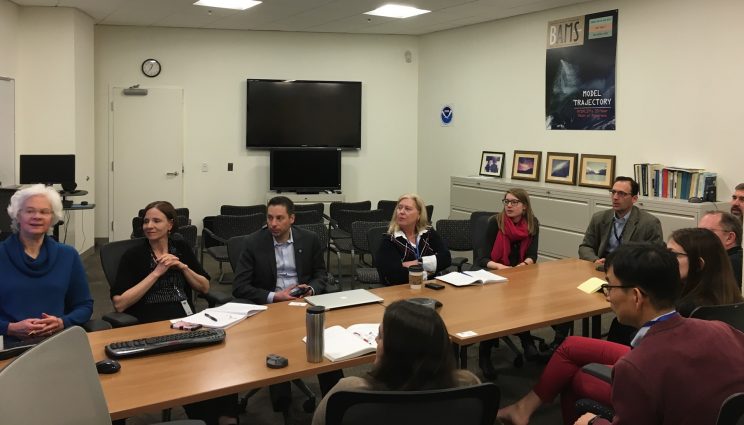 The Senior Locust Forecasting Officer at the Food and Agriculture Organization of the United Nations (FAO) in Rome, Italy (Keith Cressman) contacted ARL for help in using the HYSPLIT model to estimate locust swarm movements. Mr. Cressman explained that Africa is experiencing a large surge in Desert Locust swarms, the largest in many decades. Impacts of the swarms can be devastating, threatening food security and in some cases leading to famines in affected regions. Locusts are relatively passive flyers and their movements are strongly affected by the winds while they fly. They tend to keep together (hence, a “swarm”), though, and so a wind-driven trajectory analysis is very useful to estimate their movements. The FAO has been using HYSPLIT to estimate locust-swarm trajectories to provide early warnings and forecasts to affected countries, but would like to improve the accuracy and efficiency of their HYSPLIT-based assessments. ARL has agreed to help, and initial support activities include development and installation of an automated HYSPLIT-based system at the FAO. The newly developed system will account for the fact that locusts start migrating each day about two hours after sunrise and stop about one hour before sunset. The high-priority, initial system development will likely be centered around command line scripts. If the work is successful, future collaborative efforts to develop more widely accessible, user-friendly, web-based applications may be undertaken. We are hopeful that this work will help FAO and affected regions in their challenging efforts to mitigate the destructive impacts of Desert Locust swarms.

LaToya Myles and Rick Saylor have each accepted invitations to make presentations at the National Atmospheric Deposition Program (NADP) 2020 Scientific Symposium, to be held November 2-6 in Knoxville, TN. Dr. Myles will give the keynote address on “NADP in a Changing World” on November 4, while Dr. Saylor’s talk will begin a session on “Advances in Measurement-Model Fusion for the Future” on November 5. The NADP precipitation chemistry network began in 1978 to initially provide data on the amounts, trends, and geographic distribution of acids, nutrients and base cations in precipitation over the United States. Since then, NADP has added measurements of mercury deposition and gas-phase ammonia concentrations. NADP datasets provide a valuable long-term record of atmospheric chemical composition that demonstrates the scientific and policy-relevant utility of sustained measurement networks.