HYSPLIT V.8: Major HYSPLIT Update Improves the Nation’s Public Safety
On December 6, 2022, a major new version of HYSPLIT was fully implemented to provide new operational tools to weather forecasters at the National Weather Service. HYSPLIT is the pre-eminent model, developed and updated by NOAA’s Air Resources Laboratory, that has been used for tracking hazardous and toxic emissions from industrial, transportation, and nuclear accidents, smoke from wildfires and prescribed fires, ash from volcanic eruptions and dust from dust storms. Among its new capabilities is an expanded and enhanced capability for volcanic ash modeling.

The HYSPLIT model is now entering its third decade in operations, and is used to determine the spatial and temporal distribution of toxic substances emitted to the atmosphere by emergency response agencies across the nation. When informed of this new update, the director of NWS, Kenneth Graham, stated that, “As a user of HYSPLIT during spills, leaks, explosions, etc., I can really appreciate this. Thank you for the hard work on this. Amazing!!!” 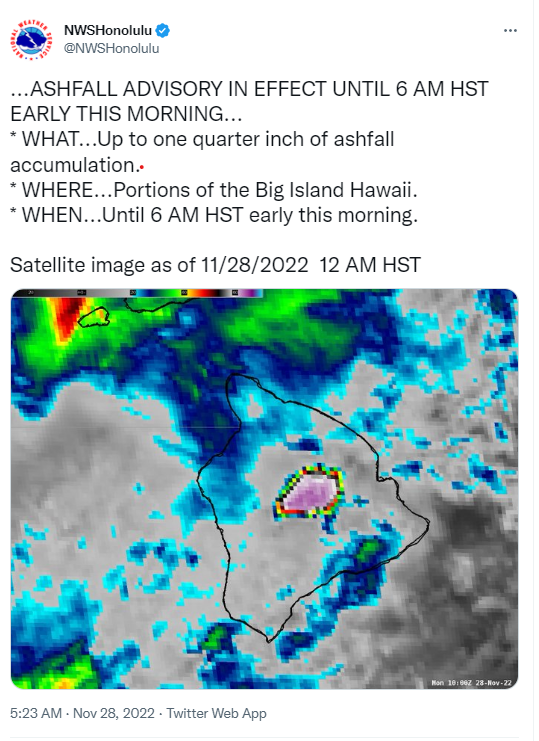 NOAA’s two Volcanic Ash Advisory Centers (VAAC), located in Washington and Anchorage, monitor volcanic emissions across to alert aircraft of dangerous ash levels within U.S. airspace. They use HYSPLIT to model the transport and dispersion of the volcanic ash cloud and produce volcanic ash advisories (VAAs) for aviation users. By coupling GEFS to HYSPLIT, an expanded volcanic ash forecasting capability allows analysts at the VAACs to generate probabilistic forecasts which express a range of possible outcomes, and will allow the aviation sector to utilize this information in risk-based approaches to flight planning. The new HYSPLIT products will also provide higher vertical resolution and better indicate concentrations of ash at various heights. Overall, these features will lead to better warnings for the international aviation community.

Comments from NOAA’s VAAC operators have been positive on the improvements offered by this version of HYSPLIT. One Washington VAAC operator noted: “There is a high degree of uncertainty in volcanic ash dispersion modeling and an ensemble approach will assist in reducing that uncertainty and should lead to overall improvements in forecasting and warning product verification compared to a single deterministic model approach.” NOAA’s Anchorage VAAC operators also noted that “we do not currently have a capability to produce volcanic ash products based on specific ash thresholds, and the work done for HYSPLIT is our path toward meeting these requirements.”
The recent volcanic eruptions of Mauna Loa and Kilauea in Hawaii has demonstrated the great utility that HYSPLIT has for ensuring public safety. The ashfall predictions generated by HYSPLIT were key to the Ashfall Advisory issued by the NWS’ Honolulu Weather Forecast Office on Nov 28, 2022; in this advisory, the public was alerted to where volcanic ash could expected only one hour after the eruption at Mauna Loa. ARL’s research is improving volcanic ash dispersion forecasts by providing state-of-the-art capabilities to operations at the NWS and ultimately, public safety is the motivation for the research that underlies the continued improvements in HYSPLIT, now embodied in this latest version implemented in early December 2022.

Six micro super pressure balloons were deployed at the German Antarctic Station, Neumayer III, by the University of Alabama in Huntsville (UAH) ASH student team in early December. Developed by atmospheric science and engineering students at UAH, the “Smart Balloon” platform uses wind trajectories calculated with HYSPLIT’s Balloon Forecasting Tool, to navigate to an area of interest in the atmosphere.

In addition to understanding balloon performance, these flights will have two scientific objectives:

Following success with the SuperBowl forecasting for emergency response, the NWS Weather Forecast Office Los Angeles / Oxnard, CA has requested automated HYSPLIT updates in advance of the Rose Parade in Pasadena, CA. The 2023 Rose Parade will begin at 8:00 AM – 12:00 PM (Pacific) on Monday, January 2, followed by the Rose Bowl at 2PM. The Rose Parade has a long history and includes floral-decorated floats, equestrian units, bands, and corporate floats.

Travis J. Schuyler represented the NOAA ARL ATDD at the Technology and Innovation Day, hosted by Karns High School in Knoxville, TN, to build interest in science, technology, engineering, and math (STEM) for their 375 Freshman and Sophomore students. Dr. Schuyler provided examples of the interdisciplinary research NOAA conducts through exhibitions of ATDD’s small uncrewed aircraft systems (sUAS) and explained NOAA’s mission of science, service, and stewardship through real world examples and experiences and answered various questions from students and staff. Travis also explained the importance of collaboration in reaching NOAA’s science goals and how working with colleagues from varying background is integral to the laboratory’s long-term success.