A number of presentations at the 2023 American Meteorological Society (AMS) Annual Meeting held January 8-12, 2023 in Denver, Colorado, will feature NOAA’s Air Resources Lab research on the boundary layer. The development and evolution of our NOAA’s air quality forecasting methods and models is discussed at several AMS presentations. More information is available on the ARL website: https://www.arl.noaa.gov/arl-research-presented-at-2023-ams-annual-meeting-in-denver/

Rose Bowl Parade and Bowl
Hourly HYSPLIT runs were done at the requests of the NWS Weather Forecast Office Los Angeles / Oxnard, CA for the 2023 Rose Parade in Pasadena held on January 2, 2023. The floats, parade and bowl proceeded without incident, although the weather was cooler than usual and some showers dodged the event.

Media Interviews
Howard Diamond answered a number of inquiries from media during the holiday week. Big Island Now on Hawaii covered the possibility of White Christmas in Hawaii. While the forecasts and odds were not conducive to snow on the peaks of the Hawaiian volcanoes on Christmas, that would most likely be during a La Niña season. NOAA defines a White Christmas as 1 inch of snow on the ground at an official weather observation station on December 25. Howard also directed the Hawaiians to the NORAD Santa tracker and Hawaiian summit webcams for further entertainment.

USA Today inquired on data sets in order to replicate a graph from a NOAA Climate.gov article. Dr. Howard Diamond provided the data and guidance to the reporter for independent production and public information. 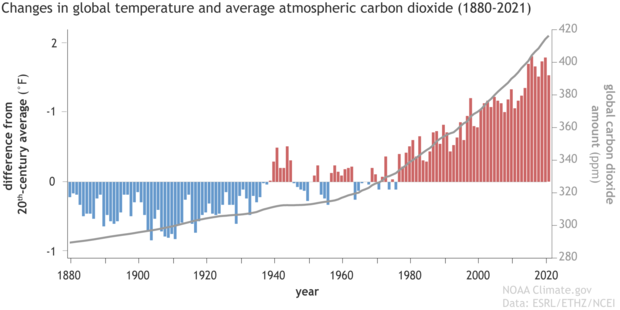 Yearly temperature compared to the twentieth-century average (red and blue bars) from 1880–2021, based on data from NOAA NCEI, plus atmospheric carbon dioxide concentrations (gray line): 1880-1958 from IAC, 1959-2019 from NOAA ESRL. Original graph by Dr. Howard Diamond (NOAA ARL), and adapted by NOAA Climate.gov.