ASMD
Fire Influence on Regional to Global Environments and Air Quality (FIREX-AQ): ASMD staff (Drs. Patrick Campbell, Youhua Tang, Daniel Tong and Pius Lee) are continuing to provide forecasting support to the joint NOAA-NASA FIREX-AQ campaign in the Western U.S. using comprehensive air quality simulations and near real-time wildfire detection from NOAA satellites similar to the National Air Quality Forecasting Capability (NAQFC) developed by ASMD. This campaign has been underway since July 15 and runs through early September. Preliminary results comparing ozone measurement along the flight tracks, using ASMD’s MONET verification system (developed by Dr. Barry Baker), validate our forecast. In general, the results have revealed encouraging agreements as many of our simulations skillfully captured the spatiotemporal variability of the pollution plumes downwind of wildfire sources. The figure below demonstrates such a good match from the Williams Flat Fire on August 7 along a flight track by NASA’s DC8, shown as color shadings in the isometric diagram. The color intensity shows discrepancies of the model prediction when subtracting from it the measured values onboard the DC8, which traversed much of the Northern Plains flying up to 10 kilometers in altitude (as indicated by the ordinate axis). The diagram represents a three-hour flight with consistently small model-predicted discrepancies where the measured values typically laid in the 60 parts per billion (ppb) range. The Williams Flat Fire was one of the most prominent fire events since the beginning of the campaign and we should see more tests of the ASMD system as the fire season and the FIREX-AQ campaign proceed. 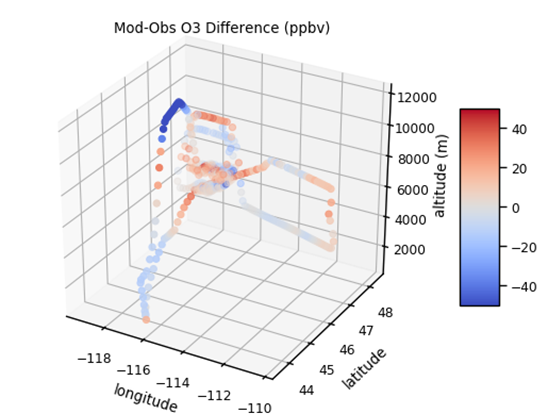 In the figure above, the color bar units are in ppb. Credit: NOAA