Lightning and Subvisible Discharges Produce Molecules that Cleanse the Atmosphere

The paper entitled: Extreme oxidant amounts produced by lightning in storm clouds, was published in Science on April 29, 2021.  From the abstract: Lightning increases the atmosphere’s ability to cleanse itself by producing nitric oxide (NO), leading to atmospheric chemistry that forms ozone (O3) and the atmosphere’s primary oxidant, the hydroxyl radical (OH). Our analysis of a 2012 airborne study of deep convection and chemistry demonstrates that lightning also directly generates the oxidants OH and the hydroperoxyl radical (HO2). Extreme amounts of OH and HO2 were discovered and linked to visible flashes occurring in front of the aircraft and to subvisible discharges in electrified anvil regions. This enhanced OH and HO2 is orders of magnitude more than any previous atmospheric observation. Lightning-generated OH in all storms happening at the same time globally can be responsible for a highly uncertain but substantial 2-16% of global atmospheric OH oxidation.

Some media mentions of this work include:

A podcast with the Canadian Broadcast Corporation:https://www.cbc.ca/radio/quirks/may-1-lightning-cleans-the-atmosphere-a-142-year-and-counting-experiment-and-more-1.6007496/scientists-shocked-to-discover-how-much-lightning-may-clean-the-atmosphere-1.6007503

Paul Kelley and Xinrong Ren visited the DCNet site located on the roof of the Hoover Building in Washington, DC to secure two meteorological towers there. DCNet is a research program established by NOAA ARL for the National Capital Region with initial goal to use meteorological observations to explore variations in model inputs for both numerical weather prediction and atmospheric transport and dispersion models. A Doppler wind Lidar was recently installed at the site in collaboration between NOAA and NIST to enhance the research on greenhouse gas emissions in the Washington, DC-Baltimore area. 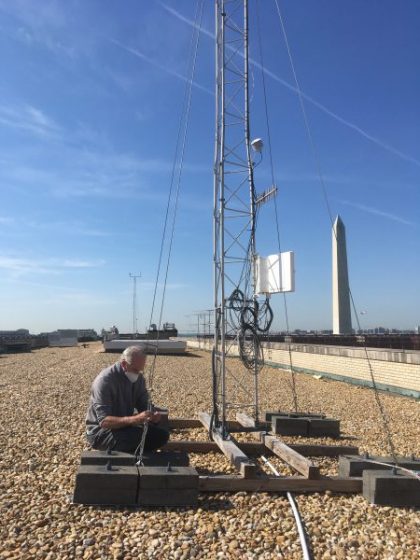 A paper by ARL authors Nebila Lichiheb, Mark Heuer, Rick Saylor, and LaToya Myles (along with Bruce Hicks) was recently accepted for publication in the Journal of Geophysical Research: Biogeosciences. The paper describes results from a field study performed in collaboration with the Delaware National Estuarine Research Reserve (St. Jones Reserve in Dover, DE) and the University of Delaware to measure atmospheric ammonia concentrations and fluxes over a coastal salt marsh. Continuous atmospheric ammonia observations at the terrestrial-aquatic interface are limited, and this study provides valuable insight into surface-atmosphere exchange in the coastal boundary layer.

Abstract: Measurements of atmospheric ammonia (NH3) concentrations and fluxes are limited in coastal regions in the eastern U.S. In this study, continuous and high temporal resolution measurements (5s) of atmospheric NH3 concentrations were recorded using a cavity ring‐down spectrometer in a temperate tidal salt marsh at the St Jones Reserve (Dover, DE). Micrometeorological variables were measured using an eddy covariance system which is part of the AmeriFlux network (US‐StJ). Soil, plant, and water chemistry were also analyzed to characterize the sources and sinks of atmospheric NH3. A new analytical methodology was used to estimate the average ecosystem‐scale diurnal cycle of NH3 fluxes by replicating the characteristics of a chamber experiment. This virtual chamber approach estimates positive surface fluxes in continuing strongly stable conditions when mixing with the air above is minimal. Our findings show that tidal water level may have a significant impact on NH3 emissions from the marsh. The largest fluxes were observed at low tide when more soil was exposed. While it is expected that NH3 fluxes will peak when the air temperature maximizes, high tide occurred concurrently with midday peaks in solar irradiance led to a decrease in NH3 fluxes. Furthermore, soil, plant, and water chemistry measurements underpinning the NH3 concentrations and fluxes lead us to conclude that this coastal wetland ecosystem can act as either a sink or a source of NH3. Such measurements provide novel data on which we can base reliable parameterizations to simulate NH3 emissions from coastal salt marsh ecosystems using surface‐atmosphere transfer models.