HQ
ARL hosted members of the Department of Commerce budget staff on April 22 and Congressional staffers on April 23. Acting Deputy Director Dr. Ariel Stein presented “ARL 101” to both groups, along with a tour of the air chemistry laboratory. 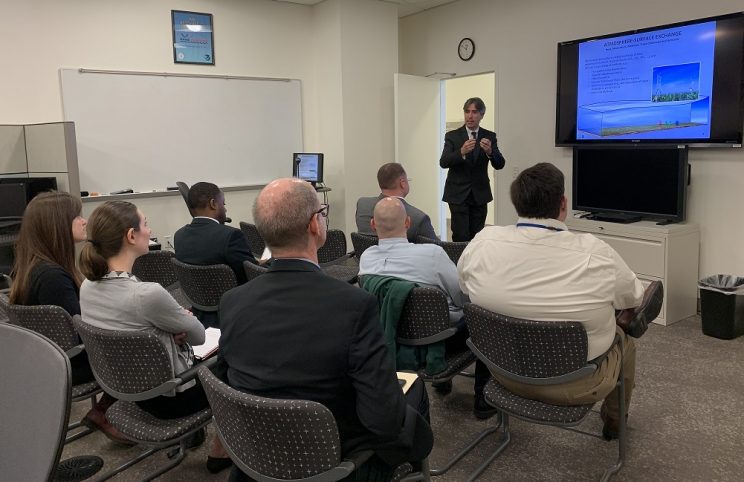 Inline Weather Research and Forecasting Model (WRF)/HYSPLIT Capability in the Real-time Environmental Applications and Display sYstem (READY): The inline WRF-HYSPLIT model, developed at ARL, was configured to run through a web interface on READY for any location selected by the user to create a high resolution dispersion simulation that takes advantage of the higher temporal frequency of the meteorological variables produced by the WRF-Advanced Research WRF (ARW) meteorological model, as well as using WRF-ARW’s vertical coordinate scheme. The inline coupling approach is a more consistent depiction of the state of the atmosphere available to the dispersion model through the elimination of the need to interpolate the meteorological fields temporally and vertically. Currently, the system is designed to create four meteorological domains, with six hours of spinup and six hours of forecast: 27 km, 9 km, 3 km, and a 1 km domain, in which the 1 km domain is used to run the dispersion simulation. For boundary conditions, WRF uses the AWRF archive (27 km) for 1980 to the end of the last year and the North American Regional Reanalysis data from the Research Data Archive at NCAR/UCAR (http://rda.ucar.edu) for the current year up to the end of the last month. Current forecasts are produced for the last 9 days from the current day using the Global Forecast System forecast model for boundary conditions. (Glenn.Rolph@noaa.gov and Fantine.Ngan@noaa.gov)

At the request of David DeWitt, the Director of the National Weather Service’s Climate Prediction Center, Howard Diamond was requested to include ARL on a tour of the NOAA Center for Weather and Climate Prediction on April 26. The visitor group consisted of 23 people, including 11 kids aged 12-16 affiliated with a co-ed Boy Scout STEM Explorer Post from Monmouth Council, NJ that focuses on environmental sciences, and their accompanying parents and advisors. Howard provided an overview of the work that ARL does, and Mark Cohen partnered with Howard to give the group a tour and briefing of the lab. The group seemed interested in what was presented, and in particular, the adults asked questions about educational and career aspects of science. The feedback from the parents and advisors was all quite positive. 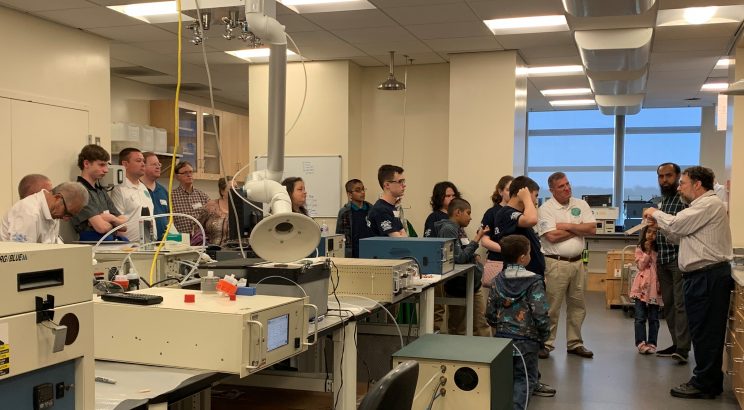 Mark Cohen carried out a screening analysis of particulate air pollution concentrations downwind of in-situ oil burns in Alaska using the HYSPLIT model. Prescribed oil burns are sometimes used as a response action after spills. The State of Alaska Department of Environmental Conservation (DEC) requested technical assistance to estimate downwind concentrations of particulate matter less than 2.5 microns in diameter (PM2.5) so that populations will not be exposed to hazardous particulate levels. They are seeking to develop new model-based guidance based on the PM2.5 air quality concentration threshold of 35 micrograms per cubic meter (ug/m3), to update existing guidance based on an earlier analysis based on a PM10 threshold of 150 ug/m3 (PM10 is particulate matter less than 10 microns in diameter). A key question, for example, is: What distance downwind of an in-situ oil burn will the concentration of PM2.5 fall below the air quality standard? How does this answer depend on the burn, site, and meteorological conditions? HYSPLIT simulations were carried out for eight hypothetical North Slope and Cook Inlet oil-burn sites for four different months (February, May, August, and November) in 2018. NOAA’s North American Mesoscale (NAM) model outputs archived in HYSPLIT model format at ARL with a 12 km resolution were used to drive the HYSPLIT model simulations. Sensitivity analyses were also carried out to investigate the impact of uncertainties on the simulation results. The results have been described in a report: HYSPLIT Simulations of Alaskan In-Situ Oil Burns. An important finding was that the hour-to-hour, site-to-site, and month-to-month variations were found to be so large that a single guideline for a “safe” downwind distance may not be practical. Accordingly, it is recommended that consideration be given to developing a prescribed oil-burn forecasting system, based on NOAA weather forecasts and the HYSPLIT model, to predict whether and/or when any potential burn could be carried out without exposing downwind populations to hazardous levels of particulate matter. Such a system is already in place at NOAA to provide decision support for potential prescribed burns of agricultural and forested areas.

Tilden Meyers was a co-coordinator of a workshop held in Boulder, CO, April 23-24 entitled “An OAR Multi-Lab Integrated Observation and Modeling Approach to Understanding Land-Atmosphere Interactions: A Bedrock-to-Boundary Layer (B2B) Approach.” The Workshop Objective was to develop a research strategy that coordinates land-atmosphere observational and modeling activities that will enhance NOAA’s prediction systems from synoptic to seasonal and decadal time scales. Michael Buban and Bruce Baker attended and presented ARL’s modeling capability and the concept that ATDD’s unmanned aircraft system (UAS) fleet can be used as a new observing platform for boundary layer observations.

ATDD is welcoming Gabrielle Land as its newest federal employee. Land will begin her new position as an Administrative Management Specialist at ATDD on April 29. She previously served as a Section Manager and Business Administrator with Oak Ridge Associated Universities and has worked at ATDD for nearly 20 years. She brings a wealth of experience in procurement, budget, and other administrative functions to her new role. We are very fortunate to have her on board in this new capacity. Please join ATDD in congratulating Gabrielle.