Congratulations to Dr. Dian Seidel for receiving the Daniel L. Albritton Outstanding Science Communicator Award. Dr. Seidel exemplifies the characteristics the Office of Oceanic and Atmospheric Research desires to acknowledge with this award. A senior climate scientist with the Air Resources Laboratory (ARL), she routinely makes significant advances to the Nation’s and to the world’s understanding of and ability to anticipate climate change. Her scientific preeminence has been recognized by a number of awards and many citations to her seminal publications. Yet, she is not content with scientific excellence. She believes that outreach and education are an integral part of her research and development work and that science is only of value to the extent that it has been understood by others and integrated into their thinking, planning, and decision-making. Consequently, she consistently and effectively works to improve nonscientists’ understanding of complex scientific issues so countries and communities can make effective, science-based decisions. Her efforts span multiple audiences and approaches. She communicates well on her own behalf and on behalf of organizations and leads efforts to improve the effectiveness of others’ scientific communications. Her outreach and education work always exhibit a commitment to high quality, clear communications; broadening the scope of scientific understanding; and positively influencing society and the important decisions it must make. 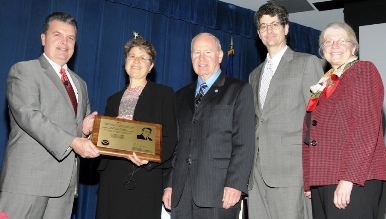 The following paragraphs describe some of the many contributions she has made to effective scientific communication.

Dr. Seidel has been a key contributor on numerous, important scientific assessments, which are a key method of communicating complex information to decision- makers. Those decision-makers rely on the assessments to guide their prioritization of issues and resources and the development of policies and plans. Effective communication in these assessments is a vital bridge between scientific research and actions to address important issues, such as stratospheric ozone and climate change. Dr. Seidel has worked on behalf of the Intergovernmental Panel on Climate Change (IPCC) (member of U.S. delegation, expert reviewer, and contributor); the ozone layer assessments (co-author, reviewer, and contributor); the World Meteorological Organization (WMO) climate and water vapor assessment (co-author); and the U.S. Climate Change Science Program (lead author). She was recently invited to be the lead author for the chapter “Impact of Stratospheric Changes on Climate” in the 2010 World Meteorological Organization/United Nations Environmental Program scientific assessment of ozone depletion. Her contributions to these assessments have helped build support for protecting the ozone layer and mitigating greenhouse gas emissions by providing a sound and clear scientific basis for action. Not only has Dr. Seidel’s scientific preeminence allowed her to make pivotal contributions to these assessments, her participation is especially sought out for her ability to clearly communicate complex issues. The recent IPCC assessment is a good example. She worked with the writing team on the physical science basis of climate change to ensure that important but complex scientific issues were accurately and fairly described in a way that decision-makers could understand. This commitment to clear communication of sound science led to Dr. Seidel being invited as a member of the U.S. delegation working on the IPCC synthesis report, where she made additional key contributions to producing a balanced and easily understandable product. The impact of these IPCC reports on decision-makers worldwide and on the public is well known.

Dr. Seidel’s frequent publication of significant research findings has brought her to the attention of the major media outlets, such as the Associated Press and New York Times. For instance, she was quoted in almost 200 outlets reporting on her paper about widening of the tropics. She is always willing to discuss findings with the press and does so in a clear and balanced manner while still respecting the underlying science. Her enthusiasm for sharing science with the public and for helping people understand complex issues and her ability to provide good explanations has led to reporters contacting her for feedback and insights about other authors’ publications. Dr. Seidel’s work with the press on her own publications as well as other scientists’ publications has significantly raised the public’s interest in and understanding of climate change.

Dr. Seidel is very enthusiastic about and effective at helping students understand complex scientific issues. In talking to students, she presents complex topics in a clear and engaging manner while still maintaining the integrity of the science. She is a regular participant in science events for students at multiple levels. For instance, over the past few years she was a keynote speaker at Francis Scott Key Middle School’s “Going Green Symposium,” a speaker at the Takoma Park Middle School Science Expo, a judge at ScienceMontgomery, and a lecturer at the University of Maryland’s Osher Lifelong Learning Institute. Extending her influence beyond direct contact with students, Dr. Seidel also helps improve teachers’ understanding about science so they can more effectively educate their students. For instance, she participated in a panel discussion titled “Earth Then, Earth Now: Our Changing Climate” at a NOAA-sponsored climate educators conference. Dr. Seidel also used her personal time to provide narration for a video on climate change, part of a series of videos on environmental science for students. Finally, Dr. Seidel works with student interns on a one-on-one basis to improve their scientific understanding and abilities. Her frequent and effective activities to improve science education have contributed to thousands of students’ scientific literacy and interest in science.

Dr. Seidel has been very active in communicating scientific information about climate through American Meteorological Society (AMS) statements. These statements summarize complex issues in a fair and succinct manner that can be understood by the general public. Dr. Seidel led the development of the AMS Statement on Climate Change. This six-page document addresses the primary questions about climate change, such as “Why Is Climate Changing?” and “How Will Climate Change in the Future?” She also helped develop the AMS statement on geoengineering. This statement has been cited for its balanced perspective on a very contentious issue. In developing both statements, Dr. Seidel worked with colleagues from a wide variety of backgrounds to reach consensus on clear and fair ways to address issues that can generate strong feelings while still remaining true to the underlying science. AMS statements are used by policy-makers, the press, bloggers, and the public to quickly gain a balanced understanding about issues from a respected source. AMS statements also have an unusually large impact for a professional society because many television weathercasters are members of the AMS, even the weathercasters who are not scientists. These weathercasters are often a TV station’s science reporter and are the primary source of most of the scientific information the public receives. In turn, these weathercasters receive significant guidance on atmospheric issues from the AMS.

Improving How Others Communicate Scientific Information

Dr. Seidel has made significant contributions to improving how others explain complex scientific issues. For instance, she helped organize an AMS Short Course titled “Climate and the Media: Understanding and Communicating Climate Variability and Change.” This was held in conjunction with the AMS 34th Conference on Broadcast Meteorology. Sixty- five people, most of them broadcast meteorologists, attended the course. The course included a panel discussion by broadcast meteorologists and science writers on the challenges and opportunities of communicating the nature and consequences of a changing climate and talks on climate change, climate projections, and explaining climate change. Millions of television viewers likely benefited from the attendees’ improved understanding of climate change and the communication approaches they learned. Dr. Seidel also chaired an AMS committee that revised the guidelines for writing AMS statements about complex scientific issues. These statements provide a succinct summary of those issues for policy- makers, the press, bloggers, and the public. In developing the guidelines, Dr. Seidel and the committee addressed issues such as the use of a clear writing style, use of appropriate experts, and representation of areas of disagreement. These guidelines are now used by all committees preparing AMS information and policy statements, contributing to the quality, clarity, and balance of the statements. Statements developed based on the guidelines address a number of issues of importance to NOAA and the Nation, including space weather, probabilistic weather forecasts, water resources, and national weather and climate priorities.

Finally, Dr. Seidel has clearly demonstrated her support of a number of relevant strategic goals, including the Department’s goal of promoting environmental stewardship; NOAA’s vision of an informed society that makes the best social and economic decisions; NOAA’s climate goal of understanding climate variability and change to enhance society’s ability to plan and respond; and NOAA’s education goal of promoting environmental literacy. Her sustained and exemplary efforts to effectively communicate science and to improve how others communicate science have influenced decision-makers worldwide (e.g., through the most recent IPCC report) and millions of citizens (e.g., through training for broadcast meteorologists). It is rare for a world-class scientist such as Dr. Seidel to make such significant contributions to effective communications of science through so many venues and to influence so many people.