Congratulations to Dr. Yehui (Ally) Zhang for being recognized as the NOAA Team Member of the Month-August.

Ally’s innovative studies of the global climatology of the atmospheric boundary layer have helped NOAA break new ground in atmospheric research, bridging a sub-disciplinary divide between boundary layer meteorology (traditionally focused on small space and time scale processes in the lowest layer of the atmosphere) and climate science (which generally deals with larger space and time scale phenomena).

Through careful and creative analysis of both upper-air observations and climate model simulations, Ally’s work has shed new light on features of the boundary layer over the Arctic and Antarctica, and over Europe and North America. Ally’s cooperative and engaged way of working with colleagues, and her productivity and responsiveness, have contributed to the creation of a new and highly effective collaborative research team that brings together scientists in three NOAA Research Laboratories (the Air Resources Lab, the Earth System Research Lab, and the Geophysical Fluid Dynamics Lab) and at the National Center for Atmospheric Research. 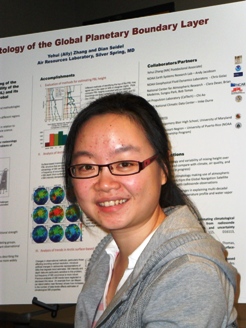 During her 21-month tenure as a National Research Council Postdoctoral Associate at ARL, she has presented her work at two ARL seminars and at two national conferences (the American Meteorological Society’s 2010 Conference on Boundary Layers and Turbulence and the American Geophysical Union Fall 2010 Meeting). She also submitted two papers (co-authored with NOAA and NCAR colleagues) to peer-reviewed journals. Ally Zhang is an outstanding example of the potential for innovation and collaboration that can be achieved when postdoctoral associates team with NOAA scientists to explore new areas of environmental research relevant to NOAA’s mission goals.