From April 15 to May 31, 2009, the Air Resources Laboratory (ARL) will participate in a 6-week intensive air quality study in Houston, Texas called the Study of Houston Atmospheric Radical Precursors (SHARP) project. Radicals are highly reactive atoms or molecules that usually take part in chemical reactions. Radicals play an important role in combustion, atmospheric chemistry, and many other chemical processes. The SHARP project will include an impressive array of trace gas and aerosol instrumentation deployed on fixed and mobile platforms to enhance our understanding of the complex chemical and physical processes occurring in the Houston area. ARL scientists will measure ambient air concentrations of reactive nitrogen species (commonly referred to as “NOx”), which are radical precursors that contribute to the formation of ground-level ozone. ARL will also measure atmospheric mercury compounds. Measurements will be made from rooftop laboratories installed atop the North Moody Tower, an 18-story dormitory on the campus of the University of Houston. ARL scientists will join dozens of other scientists and graduate students from a wide variety of universities, private sector companies, and other federal laboratories.

Background: The Houston metropolitan area suffers from some of the highest ground-level ozone concentrations observed in any U.S. city. In addition, it is among the fastest growing metropolitan areas in the country. Despite some improvements in air quality and the reduction of emissions in recent years, ground-level ozone violations persist. The prevalence of motor vehicle traffic, petroleum refinery installations, and other heavy industrial facilities contribute to a unique mix of NOx and reactive hydrocarbon emissions in the area. This has led to the rapid and widespread formation of ozone and other secondary air pollutants. Texas also ranks number one among the fifty states for mercury emissions. The SHARP project is an extension and enhancement of two earlier Texas Air Quality Studies in 2000 and 2006 which looked at the formation and transport of air pollutants along the Gulf Coast of southeastern Texas and the causes of air pollution.

Significance: The SHARP project will elucidate critical emission, chemical transformation, and deposition processes influencing the type, amount, and spatial and temporal distributions of atmospheric radicals ultimately responsible for the formation of ground-level ozone, secondary aerosols, and mercury chemistry in the Houston area. Ground- level ozone and aerosols cause respiratory and cardiovascular problems and lead to tens of thousands of premature deaths, with costs of more than $100 billion, each year. More than half of the people in the U.S. live in areas that do not meet the health-based air quality standards established by the U.S. Environmental Protection Agency. Mercury has been detected in large concentrations around the Houston region’s petrochemical facilities. This presents the potential for enhanced local mercury deposition to the coastal environment. Human exposure to mercury is primarily from the consumption of contaminated fish and other aquatic organisms. Methylmercury, a highly toxic form of mercury, adversely affects the nervous system, particularly those of fetuses and young children. 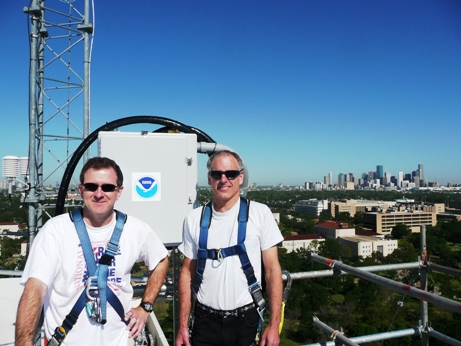