NOAA’s Air Resources Laboratory (ARL) plans to launch research balloons in West Texas beginning September 12 through September 20, 2011. The study is part of the cooperative research being conducted with Duke Energy. The balloons will contain a small, lightweight instrument package that will transmit information on wind speed, wind direction, temperature, and humidity, in real time, back to a ground station. The balloons will be launched at varying times throughout each day; rise for a little over an hour and then float gently back to earth. What will be observed is how the atmospheric flow changes in both space and time. Data collected will be used by the weather forecast models to help wind farms estimate how much power they can produce, and when they can schedule maintenance.

Background: ARL has a long history of research capabilities focused on low level winds and turbulence in the planetary boundary layer (the portion of the atmosphere closest to and most influenced by the Earth’s surface). In September of 2010, ARL entered into a Cooperative Research Agreement with Duke Energy with intentions of improving the ability of the renewable energy industry to accurately forecast winds at the height of the turbine blades. Shortly thereafter, ARL’s Atmospheric Turbulence and Diffusion Division established a research site at Duke Energy’s Ocotillo Wind Farm in West Texas. The purpose of this balloon launch is to get a better picture of what the vertical atmosphere looks like around the wind farms. 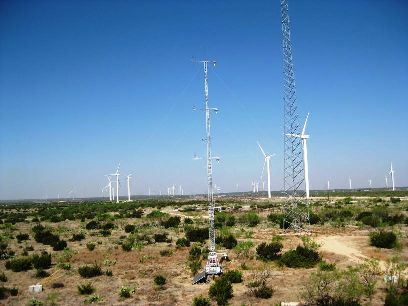 Significance: Forecasting the winds at different heights in the atmosphere in the vicinity of wind turbines is a critical component to estimating wind power, since relatively small changes in wind speeds disproportionally lead to larger changes in the amount of power produced. And predicting total power outputs over 24 hour periods is an important operational entity in the modern wind power industry. It is predicted that the better the forecasts of wind power production, the lower cost to power producers, and hence to the consumer.