ARL to Deploy Hurricane Turbulence Probes in the Florida Keys

The Air Resources Laboratory’s (ARL) Field Research Division will deploy Extreme Turbulence (ET) probes at two locations in the Florida Keys. Both sites in the Keys (Tennessee Reef and Pulaski Shoal) are navigation lights situated on coral reefs away from land. The probes will be deployed during the week of July 18 and operate through most of the 2010 hurricane season. The ET probe, developed by ARL, is designed to measure winds, turbulence, and air-sea fluxes in high-wind conditions, such as those encountered in hurricanes. In 2009, one probe was deployed in Florida and another along the North Carolina coast. However, the 2009 hurricane season was relatively quiet. The only high-wind events observed in 2009 were at the North Carolina site when extratropical cyclones moved up the Atlantic coast. Based on experience gained last year, the probes have received several upgrades for the 2010 hurricane season, including the addition of spikes on the top to deter birds from perching.

Background: The deployment of ET probes for hurricane research is an offshoot of earlier ARL research conducted with aircraft gust probes (an air velocity sensing instrument mounted on the front of aircraft). Gust probes are designed to collect wind measurements from aircraft moving at high speeds. The ET probes are a similar design modified for use at a fixed surface location in high winds. Initial tests of the ET probe prototypes took place in 2004 as Hurricanes Frances and Ivan came ashore, but the probes were only deployed for 2-3 days at a time. More recently the focus has been on seasonal deployments lasting several months. 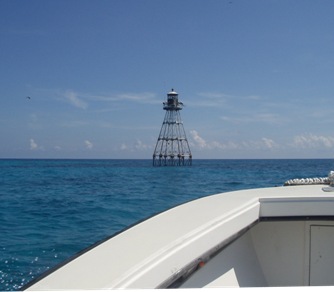