Beginning around August 25 and running for several months, scientists from the Field Research Division of the Air Resources Laboratory (ARL) will deploy a special turbulence probe, called the Extreme Turbulence (ET) probe, on a pier in Duck, NC. The 560 m pier is operated by the Army Corps of Engineers for coastal and marine research. The ET probe, developed by ARL, is designed to measure winds, turbulence, and air-sea fluxes in high-wind conditions, such as those encountered in hurricanes. ARL has deployed previous versions of the ET probe in hurricanes but only on land for 2-3 day periods during hurricane landfall. The pier site will allow ARL to assess how a new upgraded version of the ET probe performs while operating in a marine environment for longer periods (2-3 months). Many of the upgrades in the new probe are designed to harden the system for longer deployments. If the upgraded probe is successful, others will be deployed more widely on offshore platforms and eventually even buoys.

Background: The ET probe is an offshoot of earlier research ARL conducted with aircraft gust probes. Gust probes are designed to measure turbulence from an aircraft moving at 100-200 mph, similar to the wind speeds encountered in hurricanes. The ET probe is basically an aircraft gust probe that has been adapted for use at a fixed surface location in high winds. It has special modifications to mitigate the effects of rain and spray on the wind data. ET probes were successfully deployed in Hurricanes Frances and Ivan in 2004. However, these deployments were at locations just inland from the coast and lasted only 2-3 days. 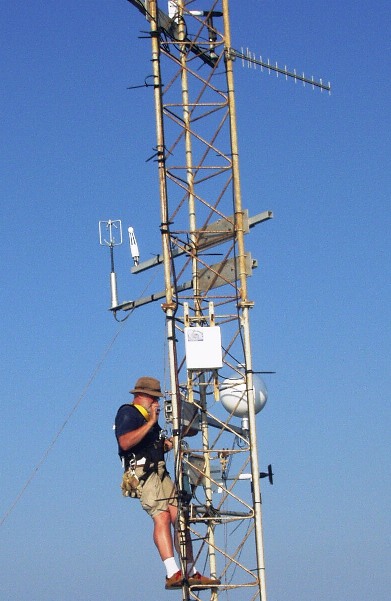