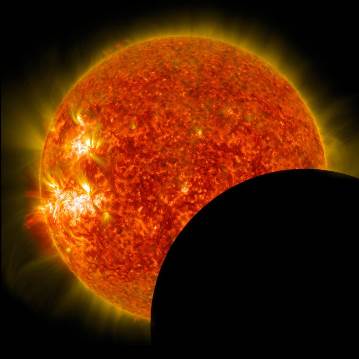 A total solar eclipse, which is when the Moon completely covers the Sun, will occur across 14 states in the continental U.S. on Aug 21, 2017. Credits: NASA

Two Divisions of ARL, the Atmospheric Turbulence and Diffusion Division (ATDD) in Oak Ridge, TN; and the Field Research Division (FRD) in Idaho Falls, ID, are located in the path of totality for the August 21st Solar Eclipse and have research and outreach activities planned. ATDD will fly their small Unmanned Aircraft System to capture vertical profiles of air temperature, relative humidity, and solar energy before, during, and after the eclipse. They will launch a weather balloon and deploy sensors to measure solar energy, wind speed and direction, and air temperature at Roane State Community College during a field trip for students from Linden Elementary School. They will collect a similar set of measurements at a local farm near Philadelphia, TN. ATDD will also partner with NOAA’s National Centers for Environmental Information to collect hourly data from 13 U.S. Climate Reference Network stations across the country during the event. Data collected during the eclipse will be made publicly available on ATDD’s website. FRD scientists and engineers have set up an additional meteorological station within their existing 34-tower Mesonet near the center of the path of totality to enhance existing observations. From this station, FRD will investigate changes in the energy balance at the Earth’s surface as the eclipse progresses.