ARL to begin transmitting data from the first USHCN-Modernization stations 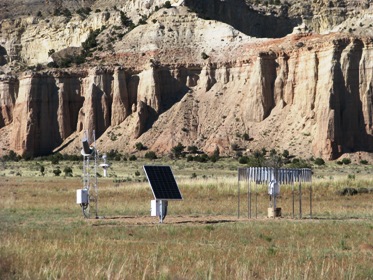 Beginning the week of October 5, ARL will turn on the first 10 United States Historical Climatology Network-Modernization (USHCN-M) stations to begin transmitting regional climate data. These 10 stations are a part of a pilot project deployment of 141 stations in the southwest: Arizona, Colorado, New Mexico, and Utah. Modernization of NOAA’s HCN was designated as a major program for NOAA in 2007. The HCN is a 1,221 station sub-set of the National Weather Service’s Cooperative Observer Network, which collects daily and monthly records of basic meteorological variables (precipitation and temperature). The USCHN-M is based on the design of, and inter-operability with, NOAA’s US Climate Reference Network, a national climate network for temperature and precipitation. The USHCN-M Pilot Project is a partnership among three NOAA offices: OAR’s Air Resources Laboratory, National Weather Service, and the NESDIS National Climatic Data Center. Project governance is through an Executive Steering Committee comprised of senior managers from the three NOAA offices. Completion of the modernization will allow NOAA to better meet the mission of providing the nation with data regarding the state of a region’s climate.

Background: The USHCN-M is a new network for regional climate monitoring of temperature and precipitation that will include a combination of existing HCN locations, U.S. Climate Reference Network stations, and new locations. Station location is based on an evenly dispersed grid to ensure greater geographical coverage. The stations are automated with 5-minute observations available hourly and three independent measurements of temperature and precipitation for reliability. Additional measurements, such as soil temperature, soil moisture, snow fall, and snow depth, may be collected as funding allows. The Air Resources Laboratory’s Atmospheric Turbulence and Diffusion Division provides the engineering and technical support for the pilot stations, tests new future instruments and practices at these stations, and analyzes the observations.

Significance: The lack of high quality surface measurements of precipitation and air temperature historically has hampered the ability of climate scientists to fully characterize the national and regional climate signals with confidence. In order to detect regional climate change over the next 50-100 years, NOAA is implementing the USHCN-M. Completion of the modernization will allow NOAA to better meet the mission of providing the nation with data regarding the state of a region’s climate.