Starting on July 25, 2016, the Air Resources Laboratory’s Field Research Division (FRD), along with partners from Washington State University and the Department of Energy Idaho National Laboratory, will begin a series of atmospheric tracer releases to study the behavior of pollutant plumes in light wind conditions. The releases are part of a multiyear research effort called Project Sagebrush, which is designed to reevaluate the results of tracer studies conducted from the 1950s through 1970s. The research community still commonly uses tracer data from these “classic” tracer studies, such as the 1956 Project Prairie Grass, to evaluate dispersion models even though the studies took place decades ago when tracer technology and meteorological instrumentation were significantly less advanced. Project Sagebrush is generating new tracer data sets using modern tracer methods and meteorological instruments. The study will be conducted at FRD’s tracer release facility in the Snake River Plain of eastern Idaho, one of the primary tracer release facilities in the country for dispersion research. The study will run through October, 2016.

ARL completed Phase 1 of Project Sagebrush in October 2013. The new set of releases are part of Phase 2 and will focus on tracer dispersion in light winds— wind speeds less than 3 meters/second— since these conditions can produce higher concentrations but are not as well studied as the stronger wind cases. In stronger winds, a pollutant plume often has a relatively slender shape determined by the rapid downwind transport of the material. In light winds, the shape becomes more irregular, and the plume can meander over a wider range of angles due to changes in the local wind direction. Few tracer studies have looked at light winds, and researchers have relied heavily on a single data set collected in 1974 to study these cases. 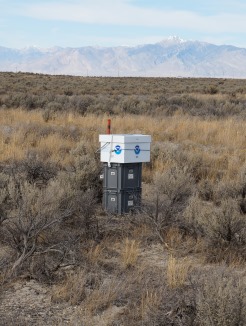 A tracer sampler deployed during the Project Sagebrush study in 2013.

There will be two test periods. The first is during July and August when light-wind tests will take place in the afternoon while solar heating is near its maximum. The tracer dispersion in these conditions will be affected by thermals produced by the heating of the surface. The second test period will be in October and will investigate light winds at night when there is a temperature inversion near the surface. For all tests, the tracer will be released continuously over a two hour period. Over 100 tracer samplers will be placed on a series of circular arcs extending from 100 meters out to a maximum of 800 meters from the tracer source. Most of the sampling arcs will be 210 degrees wide to increase the odds that the tracer is successfully detected. FRD also has a 28 meter tall mobile tower that will be placed near the center of the tracer plume to measure the vertical tracer distribution. A wide range of meteorological instruments will be deployed at the tracer facility to fully characterize the structure of the planetary boundary layer during the releases.

Understanding how and where harmful material released into the air is transported and dispersed is essential to handling important problems, such as an accidental or intentional chemical release. Data from Project Sagebrush are being used to evaluate and improve plume dispersion models. Dispersion models are primary tools used by emergency managers and first responders to determine appropriate responses (e.g., approach routes, evacuation routes, shelter in place) to chemical, biological, and nuclear incidents. ARL uses tracer observations to evaluate and improve its HYSPLIT model, which is in operational use within NOAA for a variety of applications, including emergency response.