Background: Power plants in Pennsylvania annually emit more than 3.26 tons of mercury, nearly 80 percent of all the mercury emissions in Pennsylvania. Pennsylvania ranks second only to Texas in total mercury emissions. In light that the U.S. Environmental Protection Agency’s Mercury Rule was vacated by the courts, Pennsylvania has enacted the Pennsylvania State-Specific Mercury Emissions Reduction Plan, requiring that existing coal-fired power plants begin monitoring and reporting mercury emissions by January 1, 2009, and to reduce their overall mercury pollution 80 percent by 2010, and 90 percent by 2015. The ARL monitoring site is predominately downwind of three major Pennsylvania coal- fired power plants, providing an ideal location for both sampling and differentiating emission plumes among them. In addition, the three plants offer an interesting contrast in mercury emissions reductions, as they each have their own plan. One plant will be using an activated carbon injection system on some or all of its units to reduce mercury. The second plant has scrubbers, so additional mercury reductions are unlikely. The third plant currently utilizes selective catalytic reduction technology, which has limited efficacy for mercury. However, this plant does plan to install scrubbers by 2010. ARL estimates that due to its location, the mercury station will sample emissions plumes from one of these three plants 45% of the time. 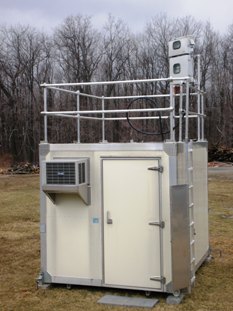 Significance: In 2003, the Centers for Disease Control and Prevention reported that 1 in 12 US women of childbearing age have unsafe mercury levels resulting in 400,000 infants born every year with blood concentrations >5.8 ug/l, a mercury level associated with IQ loss. The impacts on the education systems and national productivity are estimated at $8 billion per year. Human exposure to mercury is primarily from the consumption of contaminated fish and other aquatic organisms. Pennsylvania has more than 80 rivers and lakes on the U.S. EPA list of mercury impaired waters, including the Susquehanna, Delaware, and Allegheny Rivers. Atmospheric mercury is the primary source of new mercury entering watersheds. ARL’s monitoring will be used to assess the effectiveness of Pennsylvania’s mercury emissions controls.