is In Press in Atmospheric Environment. The study examines the impact of the great recession on nitrogen oxide (NOx) emissions in eight major U.S. cities. The study compares changes in NOx emissions trends from the National Weather Service led National Air Quality Forecasting Capability (NAQFC), the U.S. EPA ground-based network (Air Quality System or AQS), and the NASA satellite (Ozone Mapping Instrument or OMI) over the time period before, during, and after the recession (2005-2012).

Both the OMI and AQS detect substantial downward trends, -35 percent and -38 percent, respectively. The NAQFC, which relies on national emissions inventories (NEIs), shows a slower reduction rate (-25 percent). This is likely because the NEI data years are several years behind the forecasting year and do not fully account for the effects of the economic recession. All of the datasets show that the NOx emissions reductions have slowed down after 2009 or during the economic recovery.

There are two important conclusions in this paper. 1) The study demonstrates the feasibility of using satellite and ground-based observations to detect changes in air pollution during an economic event, such as the recession, and 2) The satellite and ground- based observations can be used to evaluate major updates of emission inventories objectively. 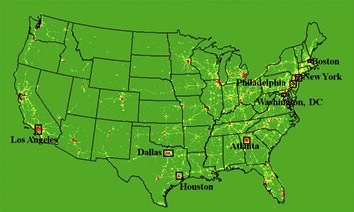 The eight metropolitan areas examined for the study. The background color represents NOx emission density based on the NAQFC emissions data and the red color indicates the high NOx emissions density.

Accurately quantifying NOx emissions, which are precursors to the formation of ground-level ozone (O3) and fine particulate matter (PM2.5), in a timely manner is essential for improving the NAQFC’s air quality forecasting guidance. The NAQFC guidance assists state and local agencies with mitigating the effects of unhealthy air. More than a third of the U.S. population lives in areas that exceed the national ambient air quality standards for either O3 or PM2.5. The researchers are the first to use both the AQS and the OMI to improve upon the NAQFC emissions inventories and to identify signals during the recession.