ARL Completes Installation of all Climate Stations in the Southwest Region

NOAA’s Air Resources Laboratory (ARL) has completed the installation of all climate stations in the southwest region (Arizona, Colorado, New Mexico and Utah), for a total of 72 new stations. The United States Regional Climate Reference Network (USRCRN) stations are being installed by NOAA on a geographical grid to ensure proper spatial representation throughout each of the nine U.S. Climate Regions. The southwest region was the first to be completed. ARL’s Atmospheric Turbulence and Diffusion Division leads the installation, calibration, and maintenance of the new, automated stations that collect and transmit temperature and precipitation data every 5 minutes. The stations also have been established in such a way as to allow for any future measurements, including soil temperature, soil moisture, snowfall, and snow depth.

Background: The USRCRN is being implemented by NOAA’s National Environmental Satellite, Data, and Information Service and the Office of Oceanic and Atmospheric Research, with cooperation from the National Weather Service. NOAA’s collaboration in this network spans across federal, state, regional, and municipal partners, including the National Park Service, Bureau of Land Management, U.S. Forest Service, U.S. Fish and Wildlife Service, Bureau of Reclamation, state parks, and regional and municipal airports. Stations began to be installed in the southwest region in October, 2009. 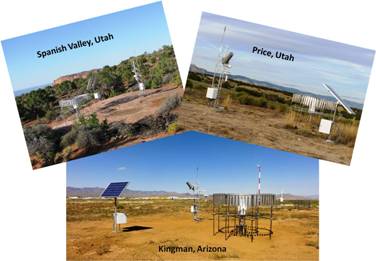