published in the December 2015 issue. The cover, pictured on the right, shows a satellite image of smoke from a wildfire superimposed with HYSPLIT’s 3D lagrangian particles.

As described in the article, HYSPLIT is a complete system for computing simple air parcel trajectories, as well as complex transport, dispersion, chemical transformation, and deposition simulations. The model continues to be one of the most extensively used atmospheric transport and dispersion models in the atmospheric sciences community. A common application is a back trajectory analysis to determine the origin of air masses and establish source-receptor relationships. HYSPLIT has also been used in a variety of simulations describing the atmospheric transport, dispersion, and deposition of pollutants and hazardous materials. In addition to wildfire smoke, examples of applications include tracking and forecasting the release of radioactive material, windblown dust, pollutants from various stationary and mobile emission sources, allergens, and volcanic ash.

The model calculation method is a hybrid between the Lagrangian approach, using a moving frame of reference for the advection and diffusion calculations as the trajectories or air parcels move from their initial location, and the Eulerian methodology, which uses a fixed three- dimensional grid as a frame of reference to compute pollutant air concentrations (The model name, no longer meant as an acronym, originally reflected this hybrid computational approach). HYSPLIT has evolved over more than 30 years, from estimating simplified single trajectories based on radiosonde observations to a system accounting for multiple interacting pollutants transported, dispersed, and deposited over local to global scales. 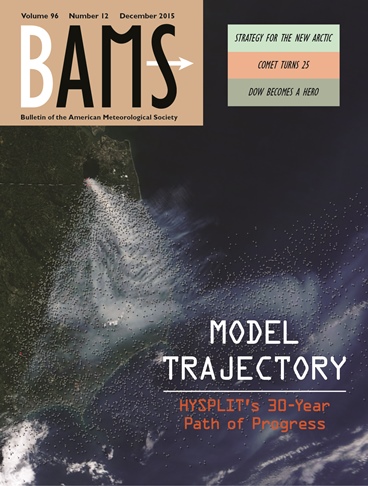