The Air Resources Laboratory (ARL) has entered into a three-year Cooperative Research And Development Agreement (CRADA) with Catch the Wind, Inc. (CTW), beginning October 2010, to evaluate the capabilities and assist development of laser anemometer measurement systems. The laser systems may be highly beneficial to issues related to renewable energy, dispersion within complex terrain, and urban emergency management. The CRADA represents a public/private partnership with the goal to develop a real-time, portable profiling capability for measuring winds and turbulence through the planetary boundary layer, the portion of the atmosphere closest to and most influenced by the Earth’s surface. Deployments and evaluations of the systems are anticipated to be conducted in conjunction with ARL’s Ocotillo, Texas wind farm observation program, ARL’s activities in the complex topography of the East Tennessee Valley, and in support of ARL’s DCNet program within the National Capital region.

Background: Due to complex surface topographies, such as those found in urban environments, coastal plains and mountainous regions, collecting meteorological observations within the planetary boundary layer are difficult. Yet, these topographical environments often represent the region of largest investment return for renewable energy, such as wind power. Current equipment and techniques used are almost always intrusive to the local population and/or can be costly. CTW, a high technology company serving the wind power generation industry, has developed and manufactures a state-of-the-art remote laser wind sensor. The current sensor has no moving parts and is able to report a broad range of wind data, very quickly. The sensor is portable and suitable for mounting on buildings, vehicles, boats, aircraft and wind turbines. Using ARL’s long history of research capabilities focused on low level winds and turbulence in the planetary boundary layer, the laser sensor will be tested, evaluated, and further developed through demonstration phases to determine whether it can collect accurate and timely measurements of wind profiles from the surface to hundreds of meters vertically in the boundary layer. 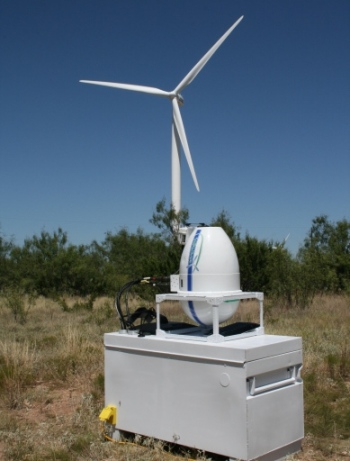 Significance: In addition to assisting research needs of the wind power generation industry, one of the most promising uses of the laser anemometer system is addressing potential emergency management issues. Meteorological requirements for timely assessment of potential atmospheric releases of hazardous materials require fast, accurate, and relevant meteorological input data. The portability of the CTW system offers an attractive solution addressing these requirements. If and when we are able to fully realize the capabilities of CTW’s technology, the information from deployed laser wind sensors would be available to support NOAA’s dispersion forecasting tool, the HYbrid Single-Particle Lagrangian Integrated Trajectory model, and be used for renewable energy purposes.