ARL, in collaboration with the University of Alabama-Huntsville and the University of Tennessee Space Institute, will produce new data sets to validate model predictions of convection and surface fluxes. The new datasets, using observations collected by ARL and partners during the summer of 2014, will be a critical component of a training database that is being developed by the University of Alabama partner of actual convective initiation (CI) events. ARL and partners also will compare the observations to data from NOAA and NASA satellite sensors, including surface temperatures, land use, elevation, topography, Normalized Difference Vegetation Index, Leaf Area Index, and established algorithms that retrieve sensible heating, evapotranspiration and soil moisture, and atmospheric water vapor content. Initial preparation of the data sets will commence in a partner workshop during the week of November 17. The datasets will be shared with NOAA partners (i.e., NWS/NCEP, ESRL-GMD) in early 2015.

Background: ARL was funded to conduct the NOAA Convective Initiation Study through the Disaster Relief Appropriations Act of 2013. In simple terms, Convective Initiation is defined as the birth of a thunderstorm. Despite extensive research on CI, the key mechanisms involved in the initial development of CI are not well understood. One approach to improve our capability of predicting severe storm events is to study the events during the warm season, May–September, where local topography, land use, and soil moisture often play significant roles in the development of clouds and convective precipitation. ARL collected data during the summer 2014 from five stations installed in various land-use types on the Tennessee Valley Research and Extension Center at Auburn University in Belle Mina, AL. The major goals for the study include the development of a probabilistic 0-6 hour product using machine-learning approaches operating on real-time observations, and improvement to the models which predict CI. 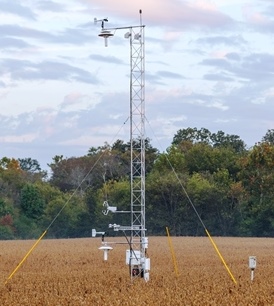 ARL’s meteorological flux tower installed in a soybean field on the Tennessee Valley Research and Extension Center at Auburn University in Belle Mina, AL. Data collected will be compared to current weather model predictions and be used for detecting initial convection that can develop into a thunderstorm. Photo: NOAA/ARL/ATDD

Significance: Understanding when and where CI occurs, and the mechanisms that cause CI, is vital to forecasters for early warnings to the public of severe weather and to take action. Advances in our ability to predict the location and timing of local convective storms can help reduce risks in a number of areas, including aviation safety, flood forecasts and other wind- and precipitation-sensitive industries.