There were no chemical, biological agent, or radioactivity releases involved in the attack of September 11. Nevertheless, the atmospheric dispersion community was immediately alerted. There was a recognized risk of a new attack, using different methods for invoking terror. The risk continues. Washington, DC, is seen as one of the more likely targets.

There are many possible scenarios that need to be considered. Also, it is appreciated that an actual event, should it ever occur, will likely differ from any of the scenarios that have been considered. We need to prepare for any such eventualities, with the fervent hope that our preparations will never be tested. At the same time, we need to make sure that we are ready to take the necessary steps to protect people, if the unthinkable ever happens. To these ends, we need modeling systems that can be used to describe the dispersion of the substances through the air, in much the same way as weather forecasts are developed and delivered. In reality there is a lot of similarity between weather forecasting and the prediction of dispersion. It is the wind fields that determine where released materials will drift, and it is atmospheric turbulence that controls the rate at which dilution occurs.

The nation has many computer systems developed to predict the dispersion of hazardous materials released into the atmosphere. The capabilities are widespread across the federal agencies, state and local authorities, academia, and the private sector. Every one of these systems has some special quality that makes it unique. The trick now facing the atmospheric dispersion community is to determine which subset of the many dispersion systems is best suited to the challenges now facing us. There is a Federal Coordinator for Meteorology, under whose auspices the meteorological activities of the various federal agencies are coordinated. Immediately following 11 September 2001, the Federal Coordinator initiated a process to help sort out which of the many available models would be most applicable in the event of an attack using chemical, biological or radioactive releases into the air. The Office of the Federal Coordinator recently summarized its findings in a report that identifies 29 modeling systems running 24 x 7 within the federal system. Of these, nine systems are used nationwide. These are roughly equally split between the military and civilian agencies.

Sorting out which might be the best proved impossible, because each has special strengths to address the particular issues for which it was initially intended. The recommendation was made, therefore, that there is no existing “best capability” suitable for widespread application. Nor is it likely that any such generalized model will be developed in the near future. Instead, we need to learn how to access the suite of capabilities now in use, and to select from it the capabilities best suited to situations that my arise.

There is a practical reality that complicates the situation substantially. Most available modeling systems have been developed on the basis of understanding generated in field studies over grass or desert, completely in the absence of buildings or other large surface structures. The application of current concern centers on cities and urban areas, where the buildings will cause changes in wind fields that are not yet well understood. There are research programs presently under weigh to investigate the dispersion characteristics of urban areas. Recent field studies in Salt Lake City, for example, have yielded a lot of new information. However, we do not yet know how to apply the results applicable for some specific urban area to another, with confidence. Consequently, there is a strong need to obtain relevant data, based on measurements in the situations of actual importance.

This is the basis for the design of DCNet – a program to provide Washington with the best possible basis for dispersion computation, as is needed for both planning and possible response.

The problem we face is complex. The winds within a city sometimes bear little resemblance to those of the surrounding countryside. The weather forecasting community tends to rely on wind information collected at airports, typically well outside the urban areas that are now of main interest. To assume that the wind fields experiences at airports are the same as those appropriate for downtown areas would clearly be inappropriate. The presence of buildings and the “street canyons” separating them causes behaviors that are almost random, exceedingly difficult to predict or even describe. However the flow above the “urban canopy” is far more describable in terms of larger scale meteorology. It is convenient to think in terms of two regimes – the street canyon flows beneath the urban canopy and the “skimming flow” above it. Washington presents an excellent testbed for studies, because the urban canopy is well defined by the height constraint on the buildings. New York, for example, presents an opposite extreme. In New York, the buildings are not only very high, but their height is quite variable.

There are thus two major reasons to focus attention on the Washington metropolitan area. First, the attention is needed because, like it or not, we are a potential target. Second, the urban landscape lends itself to the application of new science, so that greatly improved capabilities are feasible. But there is a third reason that makes Washington so attractive. In 1983, a year-long study was conducted here, largely replicating the sort of situation that some people fear we might be confronting. In the 1983 study, minute amounts of harmless but very easily detected trace gases were released from a number of locations around and inside the beltway. (One of the gases used was sulfur hexafluoride, commonly used as an insulator in high voltage transformers. Several other trace gases were used, all variants on the fluorocarbons used in refrigeration.) This METRopolitan Experiment (“METREX”) has provided a baseline of understanding not present anywhere else. METREX was a NOAA program, specifically designed to test how well dispersion models perform in an urban area like the District of Columbia. The news was not good – the predictions were very poor. But there was some good news as well – the models appear to describe the statistics of the behavior quite well. That is, they fail to reproduce the fine details of what is going on, but they succeed in describing the probability that some particular range in exposures will be encountered. Based on this experience, the current program addresses the statistical description of urban dispersion directly. We are not that interested in the concentrations that might be found at a particular point in time, at a specific location. We are very interested in the likelihood that people will be harmed.

With the experience of METREX behind them and the recognition that Washington is now an attractive target, NOAA scientists have deployed an array of meteorological stations in the downtown area. 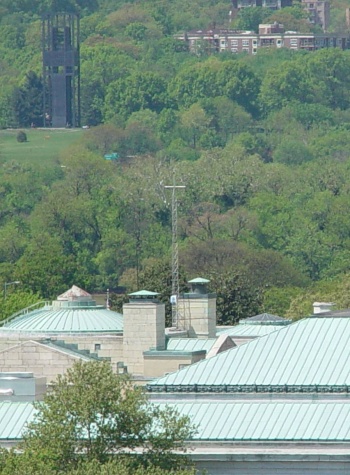 DCNet tower on the roof of the National Academy of Sciences, Constitution Avenue.

DCNet grew out of a recognition by dispersion scientists within the Air Resources Laboratory (ARL) of NOAA that society now faces a critical question. How do we forecast dispersion in urban areas and in cities when the meteorological data used by the weather forecasting community are from locations outside the area of probable concern. There are no models yet reliable enough to extend the forecasts of wind direction and speed into the downtown regions of current concern. Moreover, dispersion computations rely on assumptions about diffusion rates that are based on experience in areas that are quite different from cities. After discussion among scientists from other agencies, it was decided that a Washington DC testbed should be advocated. A proposal was prepared and was formally endorsed by NOAA as a part of the FY-04 funding cycle. The proposal received support from NOAA and from other agencies, however at the Department of Commerce level it was decided that support for the program would best come from the new Department of Homeland Security. The proposal was then submitted for Homeland Security attention through the Office of the Federal Coordinator for Meteorology. This Office is the formal organization within the federal system for coordinating activities related to meteorology, among the agencies.

In the meantime, the scientific community within the ARL decided that the issue was of sufficient national importance that immediate attention was warranted. A reprogramming of internal resources was undertaken to free up $150k in FY-02, to initiate the deployment of several sensor systems as a demonstration of the larger system being advocated. The initial $150k allocation was augmented by several small amounts from other sources. In total, the amount invested in FY-02 was approximately $200k. The array of sensors deployed in this initial prototype demonstration was referred to as DCNet. In FY-03, the funding was augmented again by discretionary support from the Administrator of NOAA, so that the total amount dedicated to the DCNet demonstration for FY-03 is about $270k.

The demonstration phase of DCNet continues. As yet, the Department of Homeland Security has not been able to respond to the NOAA ARL funding request.

The DCNet stations are more than standard meteorological observing stations. They report not only the wind speed and direction, but also the intensity of the turbulence. Sonic anemometry is used. Sonic anemometers measure the speed of sound along three axes, and derive from these data the wind speed along these axes with great accuracy and frequency. A measurement frequency of ten times per second is typical. The instruments are mounted on 10 m towers, mostly on the tops of buildings where data on the skimming flow can be obtained. One of the most visible locations can been seen from Constitution Avenue, by the Vietnam Memorial. The tower can be seen on the roof of the National Academy of Sciences (see photo), where the Einstein Memorial is located. Other towers are distributed across the downtown area – on the buildings of the Departments of Energy, Commerce and Agriculture, for example. The data are analyzed by computers on each tower and are transmitted to a central analysis location every fifteen minutes.

For obvious reasons, the Washington downtown system is referred to as “DCNet” It is proposed that the operation should be extended to cover the greater DC Capital Region (extending as far as Baltimore in Maryland), in which case the broader descriptor “UrbaNet” is being used. 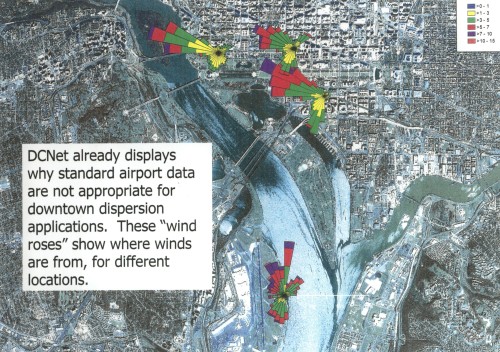 The system is a demonstration of capabilities that now exist and are ready for deployment. A trial system is now running, which enables a user to identify a source location with the click of a mouse, and define the downwind area of potential high risk using observations from the DCNet system. There is no long wait involved. Results can be generated almost instantaneously. In practice, this new generation of dispersion system relies on access to the best available weather forecast data as well as the information from dedicated arrays of sensors like DCNet. There are, of course, many other sources of meteorological information that could be accessed (highway sensors operated by Departments of Transportation, for example). A challenge to the research community is to sort out how best to make use of data from such sources.

It has already been emphasized that the main goal of DCNet is to refine our understanding of how hazardous trace gases and particles are dispersed across the kind of area where people work and live. To this end, the operational systems that are now being improved are viewed not as being final developments, but as continuously evolving capabilities with changes being made immediately as improved understanding warrants. A major concern is that an incorrect forecast could do more harm than good, and the need to demonstrate the accuracy of the forecasts is always emphasized. A new round of tracer studies is anticipated.

The Washington exercise is seen as a prototype of what could eventually be a nationwide program. There is testing and development ahead, well before any decisions about wider deployment are made. In the meantime, the system now in place offers this area an unparalleled capability to plan for possible attacks, and to respond if one were to occur.