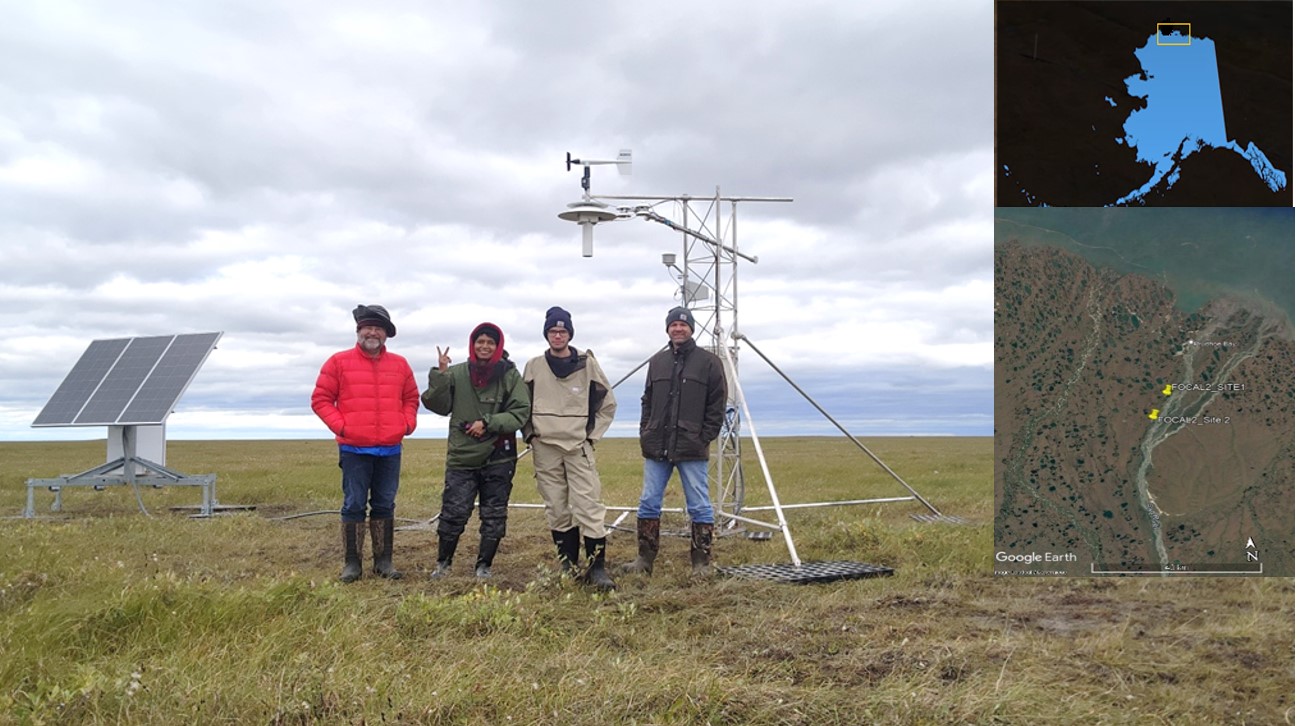 Although the calendar indicated summer, temperatures in Prudhoe Bay rarely rose above 55°F with gusty winds in early August. Mosquito suits were often required for the field work. ARL’s Praveena Krishnan is a principal investigator for FOCAL, which is funded by the National Science Foundation’s Office of Polar Programs. Mark Heuer, Dominick Christensen, and Tom Wood of ARL ATDD conducted the installation of the ground tower and IT support for the project. The North Slope of Alaska has many different land types and ecologies, although it is dominated by permafrost. FOCAL will help scientists identify the late summer and autumn net flux of methane and carbon dioxide from the North Slope and adjoining Arctic waters. This data will establish some benchmarks and a timeline for tracking the complex process of carbon flux around the Arctic Circle. This data can be used to better inform local populations of the seasonal changes in their environment and to predict likely changes in temperatures, sea ice, and permafrost.

“The FOCAL project will help us to understand the changes in Arctic carbon emissions,” said ARL’s Praveena Krishnan. “The climate at Northern latitudes is warming at a rapid rate, and data from this project at the local, landscape and regional scales will help us to understand the key processes that control the carbon emissions (carbon dioxide and methane) and how they respond to the changing climate conditions of the Arctic.”

In recent decades, warming in the Arctic region has been much faster than the rest of the globe. Northern latitudes are warming at twice the global mean, making carbon stored in permafrost increasingly vulnerable to thaw and decomposition by microbes, potentially leading to large increases in methane (CH4) and carbon dioxide (CO2) emissions, both important greenhouse gases. Known as arctic amplification, this phenomenon has been observed by instruments, climate models and in paleoclimate records.

Accurate forecasts of greenhouse gas emissions are critical inputs to global models that predict changes to temperature and to sea level. Our regional and global scale climate models require a better understanding of methane and carbon dioxide sources to gain insight into how the change will vary in a warming Arctic.

The complex terrain of the North Slope offers a wide range of Greenhouse Gas emission sources, such as wetlands or thawing permafrost. But scientists have a knowledge gap between ground based studies and large-scale regional estimates from remote sensing data or inversion-model results. FOCAL will fill in missing data on the sources of emissions by providing more insight into ground based measurements and their scalability over the ecosystem. Observations of various molecules reveal clues about the greenhouse source processes at local, landscape, and regional scale, a feature unique to this project. 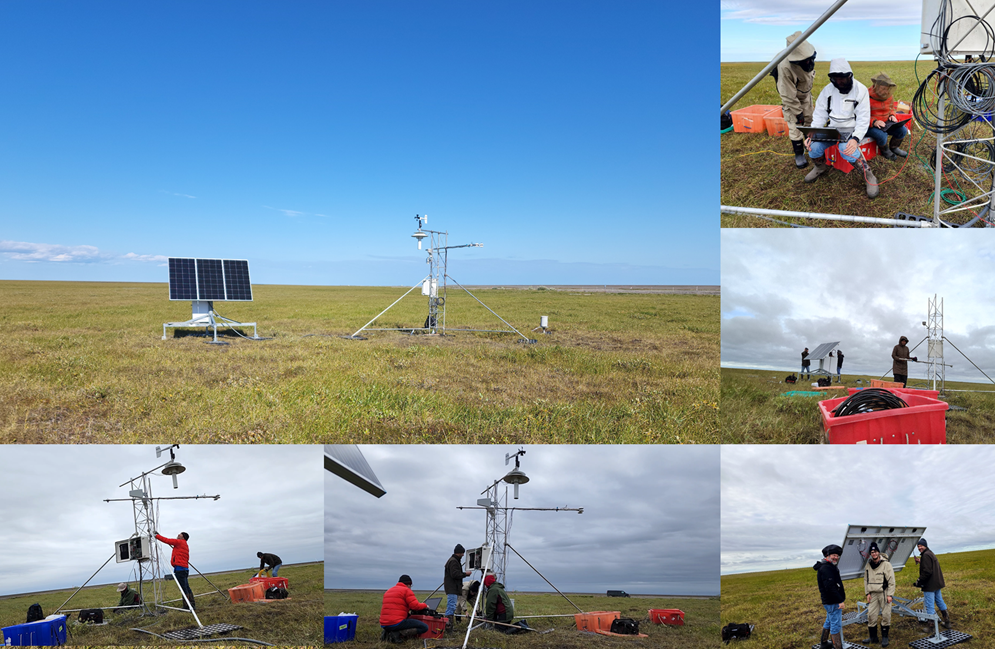 The FOCAL site 1 after the installation. The inset shows a few pictures from the field with the ATDD team at work.

FOCAL is made possible by the convergence of three unique systems: the “Best” Aircraft Turbulence (BAT) developed by NOAA, the carbon isotopologue instrument developed at Harvard University, and the DA-42 aircraft operated by Aurora Flight Sciences. The overall project lead is Harvard University, with a number of collaborators. Regional data on the contributions of key sources of greenhouse gasses at a local, landscape, and regional scale are a featured element of this research.

The ground tower installed by ARL’s FOCAL team captures resolved emissions and correlates the underlying sources to map out the ecosystem and its emissions profile. Using the eddy covariance measurements from the aircraft, scientists can extrapolate the local data to the regional scale.

“The Arctic is changing at a rapid pace, and it is important to understand all the complex interactions of biology, weather, ocean and climate in that unique landscape,” said Ariel Stein, Director of NOAA’s Air Resources Laboratory. “FOCAL is an excellent example of making multiple measurements of the boundary layer over complex land areas.”

FOCAL enables accurate measurements of the sources of Alaskan greenhouse gases to improve bottoms-up (or source based) estimates of Alaskan carbon flux, which helps us to improve our models and understanding of the Arctic processes. This experiment design captures a combination of in situ measurements with regional fluxes calculated using a transport model that is tuned for the geography of Alaska and widely applicable to other circumpolar areas.