Estimated 1991 emissions of atrazine to the air from usage in the U.S. and Canada (Map 3 from Exposure To Endocrine Disrupters From Long-Range Air Transport Of Pesticides).

Atrazine is a current-use herbicide, used largely on corn and sorghum in both the United States and Canada. It is one of the most widely used agricultural chemicals. In 1991, approximately 33 million kilograms of active ingredient were used in the U.S. and Canada.

Concern has arisen over the possible endocrine-disrupting effects of atrazine on humans and wildlife. As evidence of this concern, atrazine was selected as a pollutant of concern in the Lake Michigan Lakewide Management Plan (LAMP) process, and, was selected for intensive study in the EPA-sponsored Lake Michigan Mass Balance Study.

HYSPLIT-SV (for semivolatiles) was configured to simulate atrazine, and the atmospheric fate and tranport of the time-dependent emissions were simulated with the model. A primary goal of the study was to estimate source-receptor relationships for atrazine emissions and a number of critical receptors such as the Great Lakes.

Note that this study was carried out by Mark Cohen and colleagues at the Center for the Biology of Natural Systems at Queens College, before Dr. Cohen began his position at the NOAA Air Resources Laboratory. The study was sponsored by the Alton Jones Foundation. 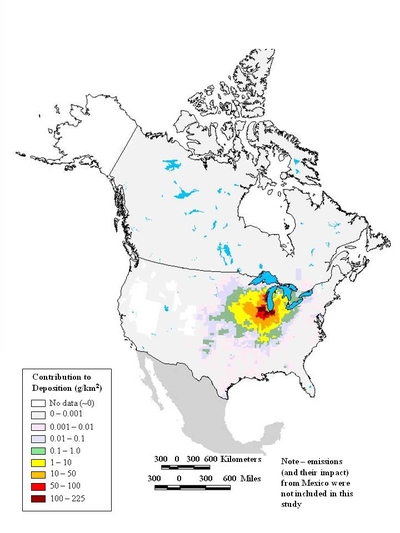 Mid-range estimate of the contribution to atmospheric deposition of Atrazine to Lake Michigan for the period March 5 – July 23, 1991 (grams deposited per km2 of source area), based on the analysis presented in Exposure To Endocrine Disrupters From Long-Range Air Transport Of Pesticides).

The following documents are available describing the results of atmospheric atrazine modeling with the HYSPLIT-SV model: