Which datum do you use for the output from your models? NGVD 29? NAD27? NAD83? WGS84? Clarke Spheroid? And what does datum mean, anyway?

The short answer is that our results are provided in latitudes and longitudes. They should be displayed as if they were based on WGS84, and elevations as if on NAVD83, because the locations of emission sources and weather stations that provide our data were taken from maps and surveys based on those datums. This does not mean that our models use these datums internally.

Internally, we use gridded data (and data grids) as developed by the National Centers for Environmental Prediction (NCEP).

To explain this, we go to the longer answer.

A geodetic datum is a mathematical model of the shape of the Earth, based on contemporary knowledge and measurements. It is used as a standard for surveying and map making. A geoid is a mathematical shape, usually a sphere or ellipsoid, whose parameters are chosen to fit known measurements between points on the Earth. Each choice of a latitude-longitude pair corresponds to a point on the geoid.

Over the last one hundred years, the United States has used two geoids in horizontal datums established for cartographic and geodetic purposes. The Clarke Ellipsoid of 1866 was used until about 1980, and then a transition was made to the WGS84 ellipsoid (or its almost identical predecessor, GRS80).

With satellite measurements, it became possible and useful to infer the position of the center of the Earth. The North American Datum of 1983 (NAD83), which replaced NAD27, consists of a WGS84 geoid whose center is located at the Earth’s center.

The vertical datums (NGVD29 and NAVD88) consist of a horizontal datum (NAD27 and NAD83, respectively), combined with an algorithm to account for the fact that the smooth ellipsoidal shape does not match the actual zero height surface due to irregularities in gravitational direction. These irregularities are caused by, e.g. inhomogeneous mass distribution, etc. For more on datums, go to //www.ngs.noaa.gov/faq.shtml#Datums .

Our models use data and forecasts provided by NCEP and generally follow NCEP policies. NCEP relies on observations from an extensive network of weather stations for data to initialize its models. Latitudes, longitudes and elevations of each station are obtained from maps or civil surveys, based on contemporaneous datums.

Observations are then treated as if they were taken at the same latitudes and longitudes on a spherical earth of radius 6371.2 km. Data are analyzed on this basis and interpolated to computational grid points laid out on, e.g., conformal maps of this sphere.

Physical processes are modeled on those grids and forecasts are derived. The results are either left in gridded form, or returned to latitude-longitude coordinates by inverse projection onto the same sphere. If returned to latitude-longitude coordinates, they are related to physical locations on Earth by treating the latitudes and longitudes as if they were on the original datum according to which the observation stations were located.

A given latitude-longitude pair, referred to two different geoids, designates two different points in space. By making the shift from NAD83 to the NCEP sphere, modelers are conceptually moving their stations by as much as 10 km North or South, as well as up to 10 km vertically. By contrast, in the transition from NAD27 to NAD83, a lat-lon combination is shifted by a dozen meters or less, primarily in the N-S and vertical directions.

Does this shift in position, and associated alterations of distances between points, create a systematic bias in the physics? Presumably, it must. If the distance between two measurement stations shrinks, for example, when moving to the NCEP modeling sphere, modeled gradients of pressure surfaces will be greater than actual, thereby increasing modeled atmospheric forces. At the same time, observed wind speeds will transport material between points in the model more rapidly than in actuality. Since the shift from one geoid to another is non-conformal, the extent of these anomalies will depend on direction as well as location.

On the other hand, meteorology does not allow or require nearly the precision that geodesy does. Computational grid points are hundreds of kilometers apart, observations are 6 or 12 hours apart and interpolated to the grid points, etc. The density of information simply does not allow high precision.

A graphic illustration of the magnitude of change from one datum to another is provided below. NCEP grid Number 103 (see NCEP grid listing) is defined as polar stereographic, vertical longitude 105W, one grid unit equal to 91.452 km at 60N. The blue coastlines and political boundaries, as well as the blue, equally spaced computational gridlines are laid out on the accompanying illustration, using the NCEP sphere. By contrast, the red coastlines and political boundaries are laid out using the NAD83 datum (WGS84 spheroid). The red gridlines indicate how the original computational grid points change from the one datum to the other. They are no longer equally spaced. Grid cells on the Northern side are slightly wider, and displaced somewhat more Southerly, than grid cells on the Southern side. The anomalies are definite, but not pronounced. 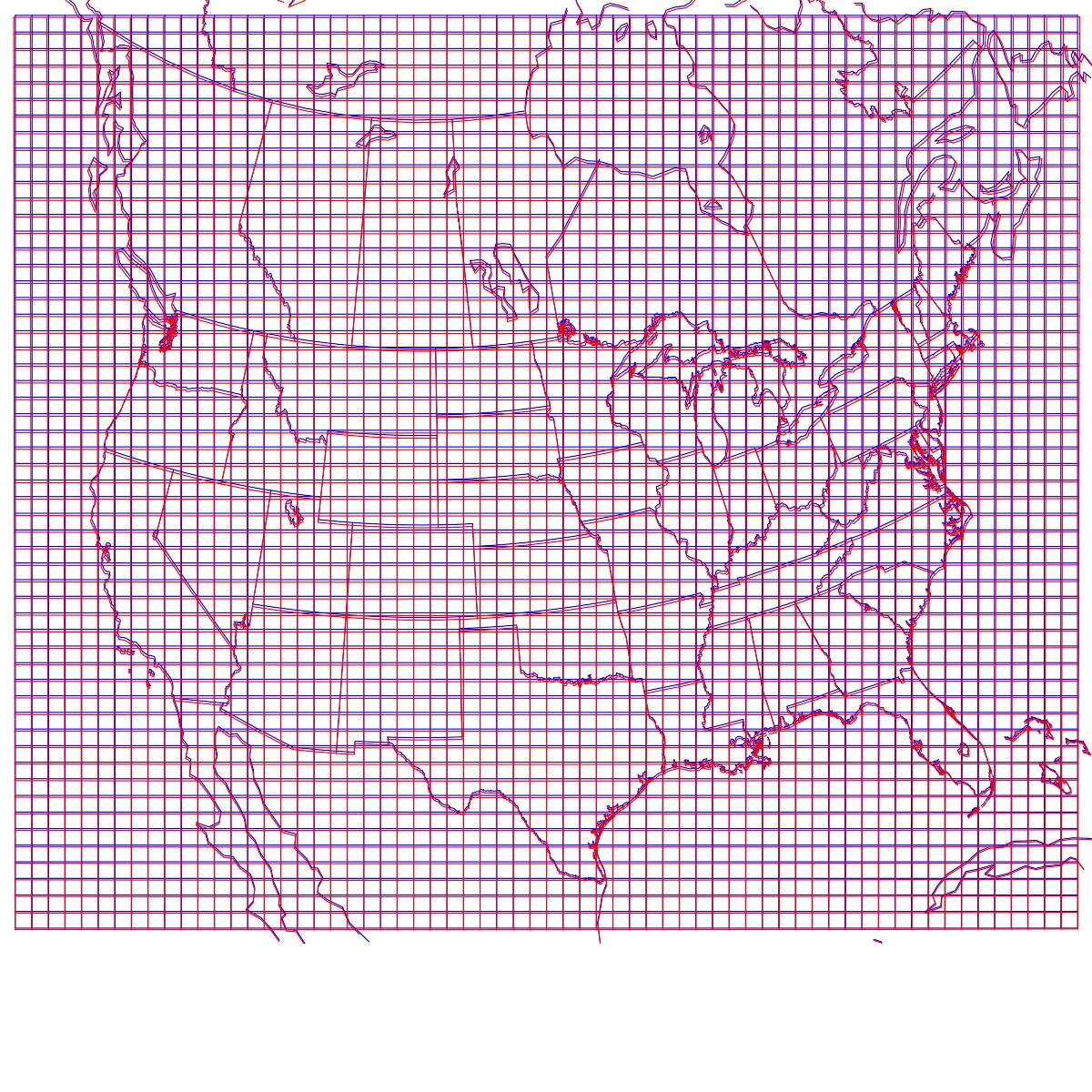 Focusing on the top left quadrant gives a clearer impression of the amount of shifting involved: 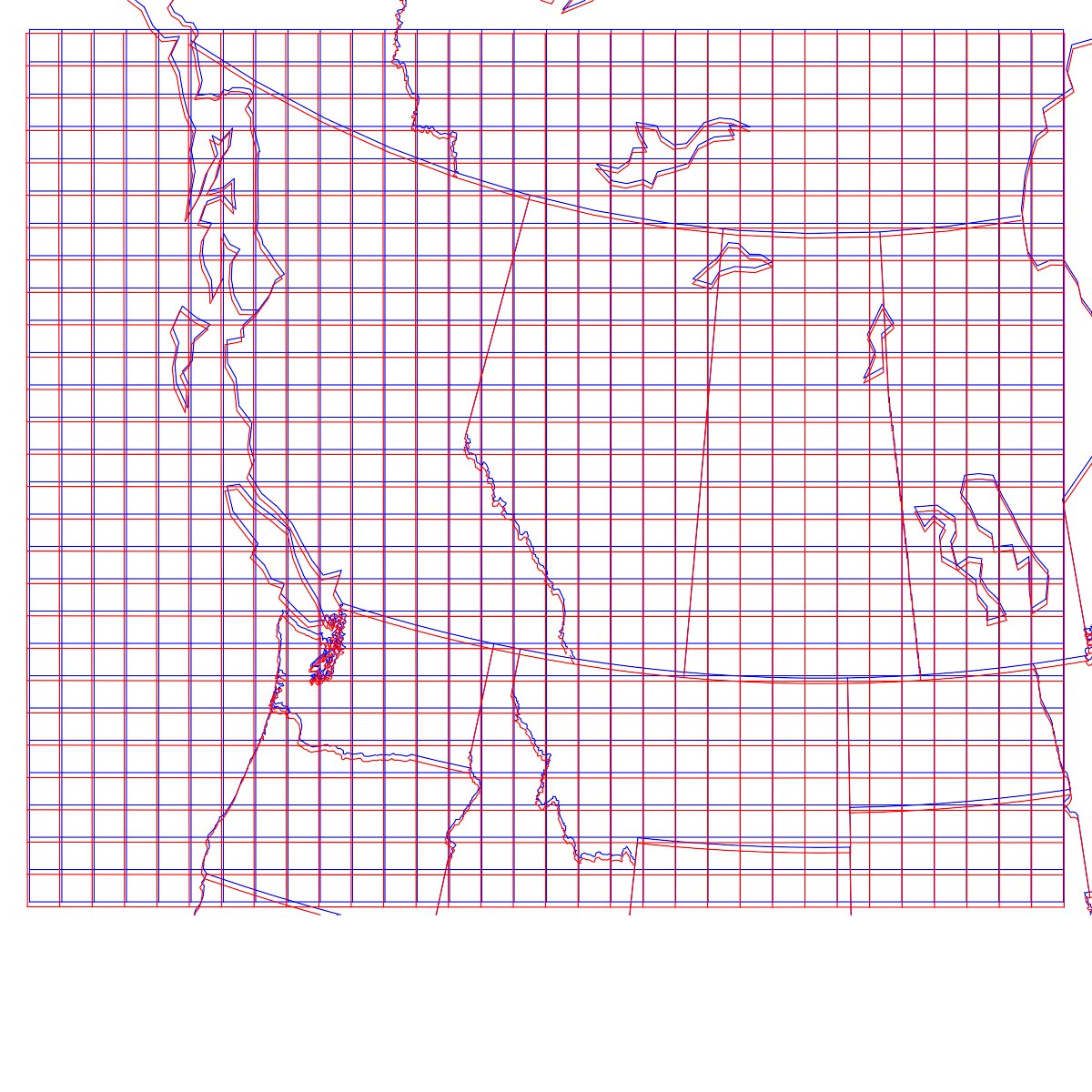