One team recognized included ARL’s Rick Saylor for Scientific or Engineering Achievement. The award was presented to the GEFS-Aerosols effort to integrate weather and air quality forecasts to generate week long forecasts of aerosol components such as dust, wildfire smoke, carbon, and volcanic ash. The model was incorporated into service by the National Weather Service on September 20, 2020 following a five year effort between NOAA’s Oceanic and Atmospheric Research (OAR) and the National Weather Service. A visualization of the tool’s capability is at right.

Also receiving a bronze medal was a group including Ariel Stein, Acting Director of ARL, for Organizational Development. He was one of several leaders across OAR and NESDIS that coordinated the unique research opportunity that pandemic lockdowns offered to study our environment. The team prioritized research to explore the relationship between various levels of human activity and their environmental impact.

Finally, HYSPLIT tools for decision makers were also recognized in one award to the NOAA’s Weather Forecast Office (WFO) Houston/Galveston, TX, for innovative, live-saving decision support services during the Deer Park fire and resultant hazardous material release lasting five weeks. HYSPLIT transport and dispersion models provided essential information to the WFO to respond to the  Deer Park chemical fire which broke out in March 2019, shown below.

At approximately 10:20 am local time on March 17, 2019, a tank caught on fire in Houston, Texas. Impacts to the local air quality were monitored for weeks by a variety of federal, state, and local agencies. Image credit: EPA.gov 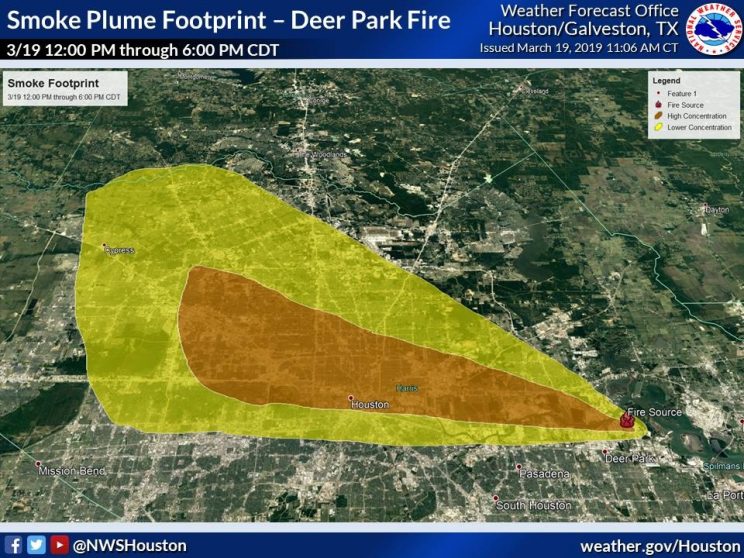